Professor’s invention from over a century ago impacts ‘snow science’ 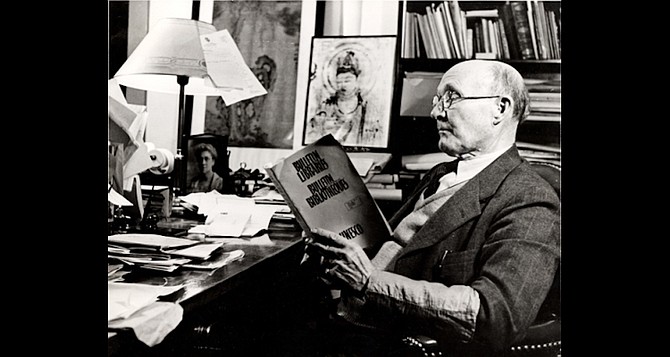 James Church sits in his office located on the University campus.

James Church was a man with many hats. As a professor of Classics at the University of Nevada, Reno, he taught a variety of subjects related to the arts, including literature and art history. Then, as he spent more time in the Reno area, he discovered his love for snow and mountains through his many mountaineering excursions in the Sierra Nevada Mountains, where he would become fascinated with the science behind snow and the water it contained.

This fascination eventually resulted in the creation of the “Mt. Rose snow sampler,” a device that would have implications all over the world and is still used today, more than a century later.

Over the course of his life, Church would make many contributions to his community and even worldwide. Because of his enthusiasm for the arts, Church advocated for the construction of an art museum on-campus, but unfortunately would not live to see this come to fruition. However, in 1960, J.E. Church Fine Arts Building opened, a building named in honor of his many achievements.

THE “FATHER OF SNOW SCIENCE”
Church was, and still is, a major figure in the world of snow science. Originating from his passion for climbing mountains like Mt. Rose, the professor spent the latter-half of his life making important contributions to snow science. He began his work with snow on Mt. Rose, where he, his colleague at the Nevada Agricultural Experiment Station and other associates built a weather observatory on the summit of the mountain.

This was an especially notable feat, because they had to transport all the building materials while on horseback or in backpacks.

The observatory was built as an effort to better track data related to snow, like snow deposits, runoff, and wind velocity. Soon after its construction, he invented the snow sampler, and this device was revolutionary, because it measured the water content of snow and not just its depth.

To accomplish this, a person uses an elongated, hollow metal tube, and sticks this tube deep into the snow. By weighing the tubes with the snow in it, and then emptying the tube and weighing it without the snow, one can calculate the difference, which results in an accurate measure of the snow’s water content. This process is repeated along a snow course, a path with designated points for samples to be taken from, and an average is created based on all these points on the course.

To Church, measuring snow wasn’t just for the purpose of recording data—it was a way to solve conflicts. His expertise with snow allowed him to be a consultant internationally, attending conferences to share his knowledge and helping other countries and regions reliant on snow-fed water systems put snow surveys in place.

One of his most notable international projects would be his snow survey in the Himalaya Mountains. This effort was difficult because of the physicality involved in traversing the mountains—Church was 78 years old at the time—and the complications with getting equipment to the survey sites. On top of this, he had to get the cooperation of India, Nepal and Pakistan, because their countries either contained the stream sources or streamflow necessary for the project.

In some of these archived documents, readers will find that by implementing these snow courses, Church helped countries better comprehend their water availability, and this brought a greater sense of understanding between them. He acknowledged this in a speech he made at the Western Snow Conference in 1948:

“Barrier ranges and trunk streams merge national interests like children in a family. My wanderings have become adventures in international peace. At the end of the rainbow I sought snow and found friendship." 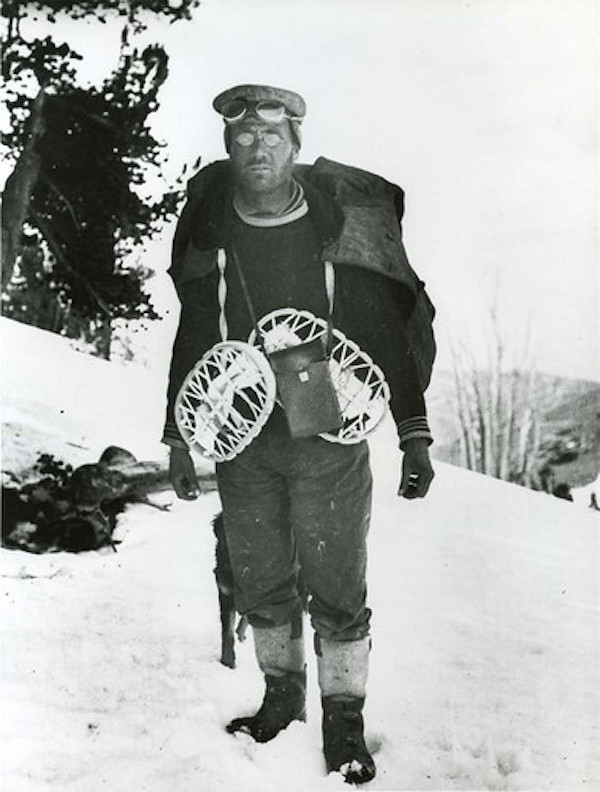 Special Collections and University Archives Department, University of Nevada, Reno.
James E. Church standing on side of mountain with snowshoes draped around his neck.
SNOW SCIENCE TODAY
While snow hydrology has developed quite a bit since Church’s initial invention, today’s technology is still based on his snow sampler. In 1935, the federal government began overseeing snow surveying programs across the West. Initially, this effort was started to combat crop failure during the Dust Bowl but is now an important tool for western states.

This is because, unlike eastern states, the West depends heavily on precipitation during the winter for its water sources. Jeff Anderson, a water supply specialist at the Natural Resources Conservation Service, explained that this precipitation usually comes from the mountains, so it’s crucial to know how much water will be available from there. That way, western states can plan their water supply for crops, recreation, and many other activities that depend on water.

“We really depend on that mountain snowpack,” he said. “Being able to predict how much water will be available in the summertime really helps farmers across the West make a lot of important decisions, and it helps cities plan their water supply, [as well as] where they’re going to be able to get it from.”

Adrian Harpold, an associate professor in mountain ecohydrology at the university, added that the amount of snow “is a canary in a coal mine”, so measurements of it are important for understanding and preparing for climate changes in the future.

“If the Sierra were to receive more winter rainfall and little snow, it would have fundamental consequences for society,” he explained. “To me, this says that science must be used to provide a path forward for a century with less of the snow that Dr. Church loved, and help develop solutions to imminent challenges for managing water resources.”

Since Church first made the snow sampler, over 300,000 snow course measurements have been done throughout the West. On top of this, a Snow Telemetry (SNOTEL) system was introduced in 1977, which allows for snow measurements to be conducted at remote weather stations automatically. These SNOTEL sites also measure snow levels every hour, meaning that they can offer more data more often than manual snow course measurements.

Anderson said Church’s work was integral in the development and standardization of snow technology, which made these SNOTEL sites possible.

“He certainly laid the groundwork for the science, and the science has evolved, and now the science continues to evolve with more remote sensing of snow,” he said. “But really it all comes back to still needing those measurements, similar to the ones Dr. Church made.” 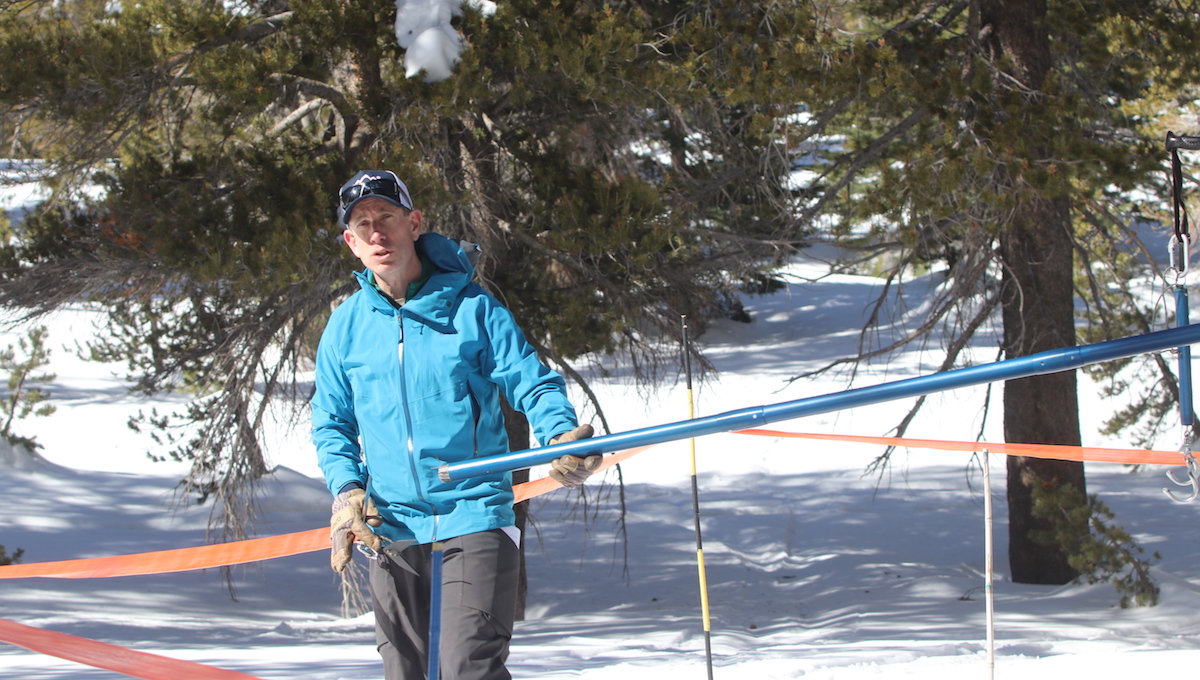 Steve Ranson / LVN
Jeff Anderson of the Natural Resources Conservation Service prepares to take a snow measurement reading near the Mt. Rose summit in March.
SNOW SAMPLING IN THE PRESENT DAY
While there are around 875 SNOTEL sites in use across the western U.S., Church’s manual method is still used. Anderson said they continue to make these measurements, sometimes even using the same snow survey courses that Church created.

At the university, expertise and passion for snow hydrology is continued through multidisciplinary efforts including the Global Water Center, the Nevada Water Innovation Institute and the hydrologic sciences graduate program. This work, as well as teaching and outreach across many other university departments and programs, serves as proof of Church’s long-lasting legacy.

“[Snow hydrologists] are all carrying on in the tradition of making [snow] measurements in the field — and with drones, airplanes, and satellites — and using them to improve water resource management, which is very much in the vein of Dr. Church,” Harpold said
Bianca Wright article in the University of Nevada, Reno’s Research & Innovation appeared in March. Permission granted to the Nevada News Group to reprint the article.