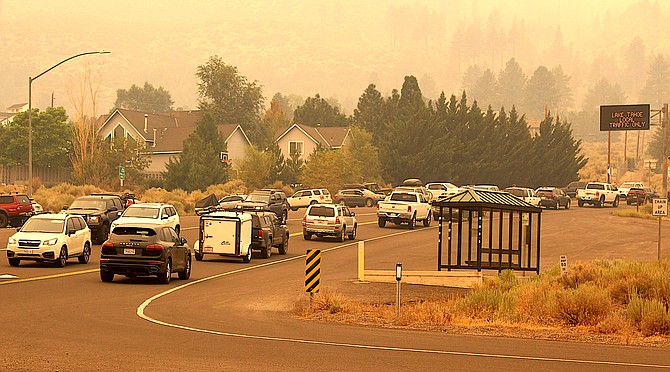 Traffic was backed up at Foothill Road and Kingsbury Grade this morning just moments before the westbound lanes were closed.
Photo by Kurt Hildebrand.

Carson City opened two evacuation centers, one at the Community Center – 851 East William Street and one at Fuji Park – 601 Old Clear Creek Road. As of Monday night, both evacuation centers are at maximum capacity.

The Douglas County Community & Senior Center and Carson City Community Center are both capacity, but the following Nevada evacuation shelters have also opened:

•••
A second location for the Caldor Fire has been activated to take in evacuees from the Caldor Fire at the Carson City Community Center located at 851 E William St, Carson City, NV 89701. This center is being opened because the Douglas County Community and Senior Center is at capacity. Fuji Park located at 601 Old Clear Creek Rd, Carson City, NV 89701is preparing to take in livestock and small animals. If possible, please bring supplies such as water buckets and food. Additional evacuation shelters will open as needed. More information to follow.

No official evacuations have been issued at this time on the Nevada side of South Lake Tahoe. Residents in the Tahoe Basin should remain aware, and be thinking about evacuation. May people are choosing to leave the basin causing slow traffic in the areas and on the state route highways. Pay attention to road closures and available shelter locations. If residents feel unsafe they should leave the area. The Douglas County Sheriff’s Office is working in collaboration with the City of South Lake Tahoe to evacuate residents based of safety and fire movement.

For an evacuation checklist and preparation visit:

Local and state officials are reminding residents and visitors to practice extreme caution while traveling on the roadways and to allow enough braking distance between cars to avoid collisions due to the extreme smoke. Please refrain from traveling to the affected areas to ensure responders are not being blocked.

Visit the following sites for the latest advisory information: