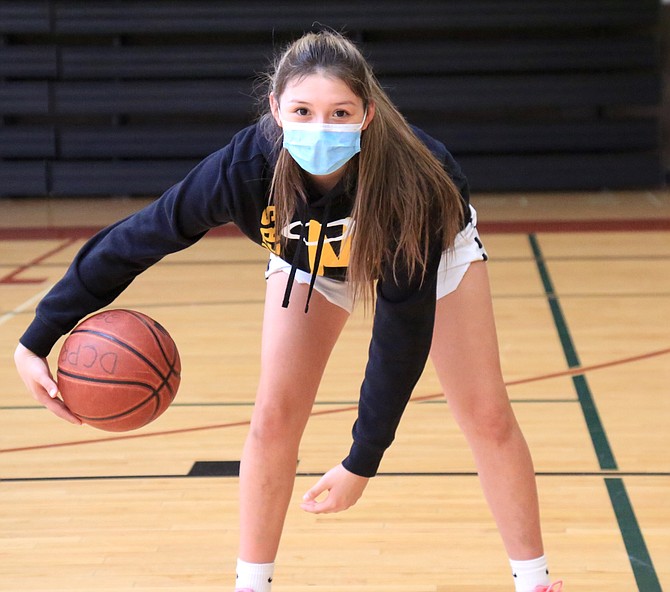 Jaileen Yarrow does a crossover while posing for a photo at the Douglas County Recreation Center. Yarrow has traveled to over 25 states to play competitive basketball and is hoping to make an immediate impact with Bishop Manogue. Photo by Carter Eckl.

Jaileen Yarrow, a freshman at Bishop Manogue and member of the Washoe Tribe of Nevada in Dresslerville, is no different.

Her dreams around the game of basketball are crystal clear, but when a 14-year-old repeatedly refers to the sport she loves as something she envisions becoming her job, it’s hard not to take notice.

It’s a confident statement from a high school freshman, who has yet to play a regulation high school contest with the Miners due to the ongoing pandemic.

However, it’s a confidence that doesn’t radiate from many athletes that young.

As a guard, Yarrow’s floor vision makes her look like a senior amongst other girls her age.

The 5-foot-7 guard has an explosiveness hardly comparable to many of her athletic peers of her age, but scoring isn’t Yarrow’s only trait.

In fact, her court vision and basketball IQ have quickly forced teams all across the country to take notice.

“My IQ is probably my biggest thing. I can score, but passing is my key. If I see you, I’ll get it to you,” said Yarrow.

Her passing pedigree has opened her pick-and-roll ability to come off screens and knock down jumpers whenever defenses relax in anticipation of her to giving up the ball.

Yarrow started on the softball field, but her father, Jon, saw a shiftiness in her footwork and decided to see if his daughter wanted to try her luck with a basketball.

It wasn’t an overnight success story as Jaileen’s first trips to travel ball tournaments forced her to compete against girls much more experienced than she was.

“She was so frustrated when I first took her to her first showcase. I told her ‘it’s all right, keep going,’” said Jon Yarrow. “Year after year she kept growing and standing out.”

Jaileen’s work ethic propelled her quickly to name recognition among the AAU circuit and the freshman has now competed in exclusive basketball tournaments across 25-plus states.

It’s a lot to take in, how far I’ve come. Sometimes I see videos of me first playing and it’s like, ‘oh gosh, this is so bad,’” laughed Jaileen.

Recognizing the talent and passion for basketball led her father to become the ultimate basketball travel companion.

For showing such promise and passion at a young age, one of the few things Jaileen can’t do just yet is get behind the wheel of a car.

“He is my biggest supporter. I’m very grateful for him putting me in basketball,” said Jaileen. “I love our relationship. He’s like my best friend. He pushes me and he knows what I can do. He gets me out there and he’s a big reason why I’m out here today.”

Her talents on the hardwood have been tested by some of the best players in the country. She was part of the Adidas circuit last year and plans to play with the Under Armour circuit on Team Militant, a U16 team based in Sacramento.

Though her freshman year of high school basketball is by the wayside per circumstances out of her control, Jaileen is already taking on a leadership role at Bishop Manogue.

Bishop Manogue head coach Sara Schopper-Ramirez may be in her first year at the helm of the Miners, but has coached one of the brightest basketball talents to ever come out of the area.

While coaching at Reed, Schopper-Ramirez instructed Gabby Williams, who is now playing for the Chicago Sky after getting picked fourth overall in the 2018 WNBA draft out of the University of Connecticut.

To have another freshman come into her program with as much talent as Jaileen has, the comparisons were only natural.

“I would say Jaileen is one of the highest-level basketball players as a freshman. She’s right behind Gabby Williams for me, as a coach,” said Schopper-Ramirez.

Even with plenty of previous years involved at the coaching level, Schopper-Ramirez says one of the best aspects to Jaileen’s game is her leadership ability.

“She’s coming in and helping me, because it’s my first year at Manogue. It’s kind of nice because I feel like I’ve coached her for a long time even though it’s only been a little bit,” said Schopper-Ramirez. “I’m excited to see how strong she will be as a senior because she does not play like a freshman at all.”

The court vision and unselfish play were the first reasons why Schopper-Ramirez knows Yarrow will be instantly impactful on the floor, once basketball action resumes.

“I definitely think she is a key player to watch in Northern Nevada over the next three years. She is legitimately fun to watch and I just think when she grows even more she’s going to be one of the top basketball players to come out of this area in a long time,” Schopper-Ramirez said.