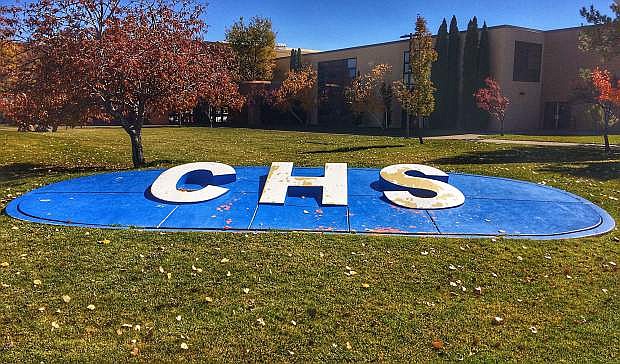 The Greenhouse Project, a Carson City nonprofit, has proposed a plan to use additional property at Carson High School by creating a comprehensive teaching farm that would benefit the site’s agriculture students and provide revenue for its own operations.
The unused 1.75-acre plot of land adjacent to the east side of Carson High School and north of its solar panels would be developed in two phases, according to Greenhouse Project President Karen Abowd and executive director Jon Ruiter, who presented their proposal to the Carson City School Board at its June 22 meeting.
Abowd and Ruiter detailed plans for the land and indicated they are in the process of filing a composting permit to the Nevada Department of Environmental Protection and need to complete a master plan review with Carson City since the nonprofit operates under a special use permit. The application for the permit has to be submitted by July 20.
The strategy’s first phase consists of vermiculture, or worm composting, to recycle food waste from Carson High and other schools within the district. Eventually, the process would include downtown restaurants involved in a GreenUP waste program. The project would allow up to 5 gallons of food waste from Carson High to be recycled per day in its initial stages.
Ruiter said the second phase is nursery crop propagation in which native plants, shrubs and trees would be cultivated and sold wholesale or retail.
“We believe this is a true win-win scenario that will benefit the community, the CHS students and the long-term sustainability of the Greenhouse Project,” Ruiter said.
The expected budget for phase one is $40,000 and phase two is approximately $99,200, according to the proposal. The organization began raising funds for the expansion earlier this year, so far generating about $50,000, which would allow it to start running phase one during the 2021-22 school year.
Profits would benefit the Greenhouse Project directly and align with Carson High’s agriculture sciences curriculum in addition to providing for Empire Elementary and Eagle Valley Middle schools’ offerings. Students enrolled in the nonprofit’s agriculture or ornamental horticulture courses at Carson High learn mastery in concepts including the recognition of the role of agriculture of society, history of production agriculture, examination of the world food supply, understanding plant science, nutrition and health and other topics.
The proposal received letters of support from district Career and Technical Education coordinator Candi Ruf and director of operations Mark Korinek, a former Greenhouse Project board member for two years, whose position is now filled by chief financial officer Andrew Feuling.
Korinek also has served on the organization’s action team for 10 years as CCSD’s liaison assisting with fundraising, volunteer needs, concert setup and as a resource for questions regarding Carson High as needed.
“My letter of support outlines how the vermicomposting project aligns with the strategic plan goals and what an opportunity it would be for our CTE/AG students to see sustainability at work, as well as middle and elementary students,” Korinek told the Appeal.
Abowd told the school board the strategy is part of a “two-pronged approach” to help the organization pursue self-sufficiency and sustainability after “a year of COVID has forced a new look beyond fundraising to ensure financial security.”
“Not competing but working with local business, the Greenhouse Project has sought the input of local landscapers and nurseries to develop a list of native plants they need and have a hard time getting, and both programs – the expanded teaching farm and the vermiculture composting of school food waste – satisfy a revenue need for the Greenhouse Project and provide educational opportunities for students,” Abowd said.
The proposal is under a master plan review.
Trustee Mike Walker approved of the organization’s efforts.
“I think this is a great project, and it’s a great opportunity for these students and CTE to apply what they’re learning,” Walker said. “There’s an element of problem-solving for both of these projects.”
In the meantime, the nonprofit’s current memorandum of understanding is reaching the end of its fifth year and staff members will return to a future school board meeting with a revised MOU.
The Greenhouse Project was founded in 2009 to assist the food insecure in Carson City, receiving a letter of intent from the Carson City School Board within the same year to lease 1 acre of property on the Carson High property. A year later, it established itself as a 501(c)3 and built a greenhouse and since then has developed a full agricultural curriculum that includes two full-time teachers.