Joe Santoro: Two Tauas but only one can be the best 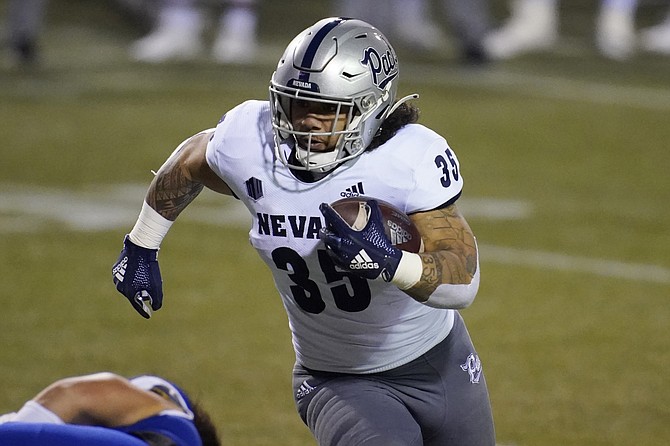 Who will end up as the best Taua in the history of Nevada Wolf Pack football? Don’t be so quick to answer.

Vai Taua had a wonderful career as a Pack running back from 2007-10, taking the ball when quarterback Colin Kaepernick needed a breather. Vai, now the Nevada running backs coach, ran the ball 711 times for 4,588 yards and 45 touchdowns, mainly over his final three seasons.

Only one player (Frank Hawkins with 5,333 yards) has run for more yards in Pack history. So, yes, he is the best Taua in Pack history right now because he was Mr. Taua Touchdown, scoring 53 times (fourth most in Pack history) in his career. But he might not have the title of Top Taua in two years.

Toa Taua (Vai’s brother) has carried the ball 488 times for 2,354 yards and 16 touchdowns over the past three seasons. Toa also has caught 83 passes for 601 yards and two touchdowns (Vai caught 61 passes for 571 yards and eight touchdowns).

They are both efficient and productive in vastly different offenses. Vai played in the Pack’s run-heavy pistol offense and usually had half the field wide open to run through as defenses chased Kaepernick all over the field, whether he had the ball or not. Toa has had to fight for carries in the pass-happy Air Raid but he also hasn’t had to deal with a ball-hogging Kaepernick.

Toa could prove to be the Top Taua to ever play at Nevada. He still has two more years to run the ball and could surpass his brother in career carries and yards before he leaves town or becomes a Pack coach. If Toa scores more career touchdowns than his brother, well, the Pack likely won’t lose another game until at least 2023.

Toa Taua is not the only possible all-time great Nevada player currently on the roster. The two others that quickly come to mind are quarterback Carson Strong and kicker Brandon Talton. Both Strong and Talton have three years of eligibility remaining and could set Pack career records for kickers and quarterbacks just by staying healthy and saying no to the NFL.

Strong and Talton will forever be linked in Pack history. The two are both from Vacaville, Calif., though Carson went to Wood High and Brandon went to Vacaville High. And they both made their Wolf Pack starting debuts as freshmen in the 2019 season opener against Purdue. The Pack won in thrilling fashion, 34-31, after trailing late in the third quarter, 31-14. Strong completed 30-of-51 passes for 295 yards and three touchdowns while Talton kicked the game-winning 56-yard field goal as time expired to cap a 10-point performance.

You could argue that Strong and Talton turned in the greatest performances in Wolf Pack history by a freshman kicker and quarterback in their first career start in that very same game. It was, without question, one of the most historic nights in Wolf Pack history at Mackay Stadium, especially considering it came against a Power Five opponent. Imagine the dozens of unforgettable moments the next three years the Vacaville Virtuosos will provide for Pack fans.

Strong, if he resists the charms of the NFL, should dominate the Mountain West over the next three years. There is not another player in the conference that compares to him right now, certainly not another quarterback. He completed 249-of-355 passes last year for 2,858 yards and 27 touchdowns and did it all in just nine games, winning the Mountain West Offensive Player of the Year award despite not even getting to the league’s title game.

Wolf Pack pitcher Owen Sharts was drafted this week in the 13th round by the Pittsburgh Pirates and will likely end his Wolf Pack career with two years of eligibility remaining. The geniuses on social media then spent the following 24-48 hours after the draft making fun of his last name because, well, that’s what they do. But it is Sharts who will get the last laugh. He now gets to start his professional career and those internet geniuses will have to find a new funny last name to pick on.

The pick of Sharts is further evidence of how vastly different the baseball draft is compared to football and basketball. Sharts, though he had standout performances at times, turned in three mediocre at best, injury-filled seasons at Nevada. He was just 5-12 for the Wolf Pack with an earned run average of 5.55 over the last three years. He also wasn’t a great strikeout pitcher (just 107 in 121.2 innings) and didn’t have great control (74 walks) and owned a fastball, for the most part, that sat in the low 90s. And, oh yeah, he is also coming off a season in which his right elbow was operated on, forcing him to sit out the bulk of the Pack’s NCAA Regional season.

Is professional baseball that desperate for pitching? Well, yes, it is. But Major League scouts could not care less about what a player is now. All they care about is what he could be five years from now. And when they look at Sharts they see a lanky right hander who could end up flinging fastballs at about 95 mph consistently in the big leagues. The kid with the funny name could have a very serious Major League career.

The San Francisco Giants could not have had a better first half of the 2021 season. The Giants, at 57-32, are in first place in the National League West ahead of the Los Angeles Dodgers and San Diego Padres. Nobody saw this coming. The Dodgers and Padres certainly didn’t. It is the best story in baseball and if it was happening on the east coast it would be all over ESPN every single night if, you know, ESPN actually understood that baseball still exists.

But this can’t last, right? There is no way the Giants will finish ahead of the Dodgers or Padres this year. The Giants’ 30-13 record at home so far is a mirage, right? That can’t possibly continue. Who are these Giants? Go ahead, name four Giants not named Buster Posey, Brandon Belt or Brandon Crawford. And, no, Madison Bumgarner, Hunter Pence and Pablo Sandoval no longer count.

Baseball’s critics had a hard time bashing the best sport ever invented this week.

The Home Run Derby and All Star game were wonderful, once again proving that those are the best events of their kind by far in all of professional sports. Shohei Ohtani was must-see TV in the Derby on Monday and in the game the following night, pitching and hitting. Vladimir Guerrero’s home run was last seen heading over Wyoming and Montana. The sport that is supposed to be lacking in personality and excitement never looked younger, more alive, vibrant and relevant.

But all the geniuses on social media could comment on was how drab the uniforms (especially the American Leaguers’ dark blue pajama-looking outfits) looked in the All Star game. Stop it. Don’t blame baseball because you stopped watching the meaningless NBA playoffs a month ago.