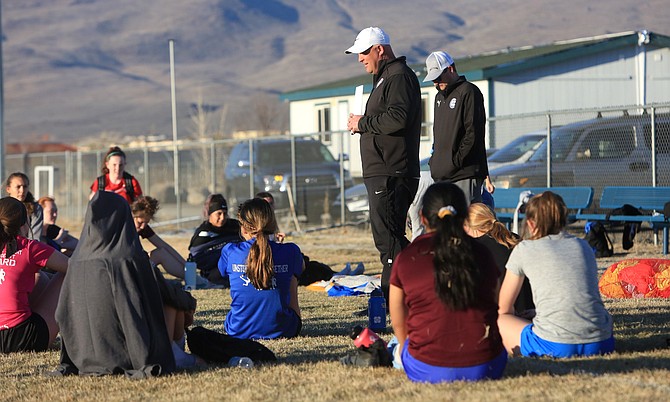 After finishing the 2019 season with a 5-13-1 record, Carson High girl’s soccer anticipates surprising some Northern Nevada teams this season.
Though the season has been moved to early spring of 2021, team captains Madison Rabideau, Marissa Perez-Morris and Cady Garrett all feel that the Senators have developed another level to their game.
“I think we have pretty high expectations this year. We know that we’re a lot higher in competition and we know what the other teams are going to be bringing this year,” said Rabideau, a Louisiana Tech soccer commit. “So, I think we expect to go pretty far this season.”
Though they feel confident in their squad, they still expect to be cast as the underdog throughout the eight-game season.

“(We’re) coming in as the underdogs of girls soccer,” said Garrett. “Everyone thinks this is easy and showing them what we’re made of is something I’m looking forward too.”

Carson High girl’s soccer was pulled up to Class 5A this season, as part of the NIAA realignment.

The Senators won’t get anything handed to them easily, starting the year with Northern Nevada’s toughest teams from 2019 (Galena, Douglas and Bishop Manogue).

All three of those contests will be on the road, too.

Taking on rival Douglas in the second game of the season will be unusual for the Senators as well.

“I think the game with them is going to be really intense,” added Perez-Morris.

A cast of returning players from last season will accompany the three captains.

Kaylee Garcia will be back on the pitch as well for the Senators after picking up an honorable mention nod last season in the midfield.

Speed on the attack is another area the Carson captains are excited to see translate into live gameplay.

“I’m really excited to see how Alyssa and Gracie step up. They’re two of our youngest and they’re sophomores, but they are so amazing. They can do pretty much anything an older girl can do,” said Perez-Morris.

The senior defender added that despite losing first team all-league defender in Annika Wick, the Senators have found chemistry on the back line.

“Our defense is looking really good. We lost Annika Wick, who was a really good defender,” said Perez-Morris. “I definitely think the understanding of the game from everyone on our team has gotten so far, it’s great. Everyone knows where they’re supposed to be.”

Along with the anticipation of being able to play a season following 16-months without a high school contest, Garrett couldn’t be more grateful to be back in position to do what she loves.

“Even though all the challenges we’ve been through, no matter what life gives us we’re still going to do what we love and not give up,” Garrett said.

“I’m really excited to hopefully make the community proud with what we can do,” Perez-Morris added.