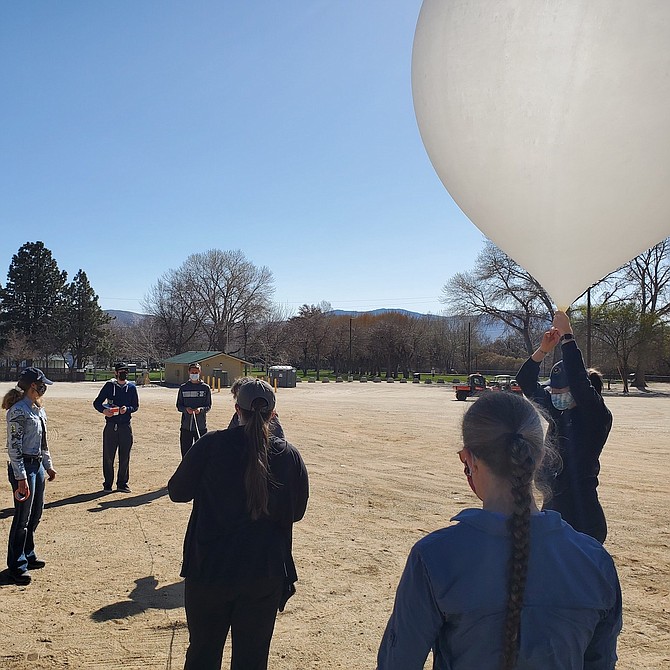 Students prepare to launch a high-altitude balloon at Fuji Park in Carson City.

Students seeking a bachelor’s degree in Organization and Project Management at Western Nevada College are receiving one of the best online programs in the nation, according to Bachelor’s Degree Center.

BDC had this to say about WNC’s Organization and Project Management program: “One of the best online project management degrees is offered by Western Nevada College. Graduates receive a BAS in Organization and Project Management. Courses in organizational leadership prepare students for work in a number of settings, including small businesses to large corporations and public and private institutions. Students learn leadership skills and gain a deep knowledge of project management terminology and duties.”

The online resource center dedicated to helping prospective bachelor degree students find an ideal educational program for them has rated WNC’s program No. 20 in the country.

Because WNC’s degree is offered online, students will be able to work in their field of interest while working toward their bachelor degree. The program is available 12 months out of the year and classes are offered in eight-week blocks, providing students the opportunities to focus on two subjects simultaneously and quickly apply concepts to their jobs, according to WNC Director of Professional and Applied Technology Dr. Georgia White.

“Pursuing this degree while employed provides the opportunity for students to immediately apply what they’ve learned to the workplace, adding value to their organization. The degree is designed to enhance the concept of theory and practice,” Dr. White said.

The timing couldn’t be better to become part of the program.

“WNC added this degree program pre-pandemic, but now we are finding even more interest as community members look to reboot their education and prepare for jobs in the recovering economy,” said WNC Provost and Vice President of Finance Dr. Kyle Dalpe. “An online program like this is a perfect way to gain access to higher education under these conditions.”

In citing how selections were made, BDC ranked universities and colleges based on tuition, student satisfaction and potential salary. “Working adults and other nontraditional students want to know that their online degree is time and money well-spent,” according to BDC in referencing the institutions that were selected. “That’s why Bachelor’s Degree Center editors only feature accredited, trustworthy colleges and universities.”

The national average salary for a project manager is $92,000, the BDC reported.

Graduates who earn a bachelor’s degree in project management online can work in the fields of manufacturing, construction, information services, finance, insurance, and more.

“It’s a skill set that is highly in demand and there are countless industries where the degree is valuable,” the BDC stated. “Plus, with a project management bachelor’s degree online, you’ll be able to learn these in-demand skills at your own pace from the comfort of your own home or work setting. There is no limit to what you can do with a bachelor’s degree in project management online; all you have to do is set your goals and get to work.”

For more information about WNC’s degree, go to https://www.wnc.edu/degree/bas/organization-project-management/.

The latest launch of Western Nevada College’s high-altitude balloon brought some new excitement and challenges for students and professors that participated in the research project.

In April, the release of the balloon from Fuji Park in Carson City saw it reach more than 88,000 feet into the stratosphere, then travel due east to Mineral County. The payload landed farther away from the launch site than past releases and was recovered east of Schurz and north of the Walker River Reservation. The retrieval team hiked 4 miles into the desert to retrieve the payload, according to Dr. Elizabeth Tattersall.

The payload consisted of instruments and sensors that help the group record data from the balloon reaching high altitudes.

The Community of Practice high altitude balloon project has been possible through a grant that Dr. Tattersall, a WNC biology and chemistry professor, received through the NASA Nevada Space Consortium.

50-Year Anniversary Spotlight: All of the Presidents

As Western Nevada College celebrates its 50th anniversary of serving students and communities in Northern Nevada, it’s not common knowledge that only eight presidents have presided over the college during the past half-century.

These colorful and ambitious educators have transcended the multi-campus college into an invaluable resource to individuals living in rural areas who wouldn’t otherwise have access to higher education. They have embraced first-generation students and those who can’t afford a big-city higher education and seek the flexibility in their schedules to tend to family and employment while earning associate degrees and workforce credentials and certifications.

Three of WNC’s eight presidents served the Nevada System of High Education institution for more than a decade, enabling them ample time to leave their mark on the college. Here is a look at their WNC legacies:

• Dr. Jack C. Davis (1971-83): Dr. Davis was tasked with the toughest assignment of all the presidents since he presided over the college when it was scattered at various locations across Northern Nevada upon opening in 1971. He helped WNC locate real estate for its first campus and first building (Bristlecone) and made students recognize that going to a community college was more affordable and served their needs. Proof came immediately as the college enrollment increased from 705 to 2,106 students by Year 2. Near the end of his presidency, Dr. Davis founded the college’s second campus in Fallon.

• Dr. Anthony Calabro (1983-95): Following Dr. Davis as president was no easy task, but Dr. Calabro was up to it. Development of college academic programs, facilities and its service area were hallmarks of Dr. Calabro’s presidency. During his 12-year presidency, the college launched WNCC Foundation and its first capital fundraising campaign, created a service center in Fernley, opened two new halls on the Fallon campus, added the Aspen Building and a state-of-the-art Machine Tool Technology shop on the Carson City campus, and opened a Child Care Center.

• Dr. James Randolph (1995-98): Like Calabro before him, Randolph oversaw several key development projects during his four-year watch. No. 1 was welcoming the unveiling of the college’s third campus in 1997 — the Douglas campus in Minden. That same year, the college provided students with the John Sheldon Trade and Industry Complex, introducing new machine tool, automotive and welding laboratories, and the opening of a Central Receiving. In 1998, Randolph proudly showed off the new Cedar Building, which became home to nursing, physics and engineering, business, computer labs, criminal justice learning space and more. In addition, a new student services wing opened in the Bristlecone Building, expanding Admissions and Records, Counseling Services, Financial Assistance, the Business Office and Human Resources. Randolph was also known to fill in at the Information Desk to help answer questions of students and visitors.

• Michelle Dondero (1998-99): Dondero became the college’s first female president, serving in an interim capacity, following a devoted WNC career as a counselor, dean and vice president on the Fallon campus — one that started after being hired by Dr. Davis. Two key technology developments were at the heart of her one year of command: The Donald W. Reynolds Center for Technology opened its doors on the Carson City campus, housing drafting, electronics, construction technology and seminar rooms, and the 30,000-square-foot Jim Randolph High Tech Center was unveiled at Carson High School, providing technology programs in a joint use college-high school facility.

• Dr. Carol Lucey (1999-2013): Student success, budget issues, a more-rounded college atmosphere for students and carbon neutrality were the focal points of Dr. Lucey’s presidency. During her tenure, the college opened Joe Dini Library in 2004 and reintroduced sports such as baseball, softball and soccer in the mid-2000s. Western became one of few colleges with an observatory when Jack C. Davis Observatory began unlocking the wonders of the universe to the community in 2003, and John L. Harvey Field and the main art gallery further engaged the community upon opening in 2006. Dr. Lucey also began an effort to increase WNC’s energy sustainability to make the college carbon neutral. Through funding from NV Energy’s Renewable Generations program, WNC opened its first solar array in 2011 behind the Aspen Building on the west side of campus.

Chester Burton (2013-17): Burton became the first and only president in the college’s history to serve in acting and interim presidential capacities before being selected as president after a nationwide search by NSHE. Burton’s 30 years of administrative management experience in the private, public and government sectors helped him stabilize the college financially as new state funding formulas were implemented for Nevada colleges. A 20-year representative of the U.S. Navy, Burton proudly introduced the Veterans Resource Centers on the Carson and Fallon campuses in 2013 and 2015, providing veterans with mentoring and tutoring as they transitioned from the military to civilian life to higher education. Another major highlight of his presidency was the expansion of the Jump Start program, which offered dual-credit college courses to high school students in Northern Nevada so they could graduate with an associate degree before graduating from high school in many cases.

Mark Ghan (2017-18): By his own admission, the pinnacle of Ghan’s 15 years at WNC was the one year he spent as acting president following Burton’s resignation. Prior to his presidency, Ghan served as the college’s vice president for administrative services and general counsel from 2013-17. Before that, he was the college’s vice president for human resources and general counsel from 2006 to 2013 and general counsel for WNC, Great Basin College, Truckee Meadows Community College and the Desert Research Institute from 2005-06. Ghan kept the college’s momentum going in meeting the growing workforce demands of companies such Tesla, Panasonic, Switch, Click Bond and GE, and providing career pathways for students in business, government and education.

Dr. Vincent Solis (2018-present): Dr. Solis brought more than 25 years of service in higher education to WNC. From the outset of his presidency, Dr. Solis has been very visible in Carson City and surrounding communities, becoming very familiar with community leaders, groups and community members. He’s also known as being very friendly, forward thinking and transparent. And, of course, very concerned about the welfare of students who attend WNC. Despite dealing with budget issues brought on by COVID in 2019, Dr. Solis has overseen many successes in his short time as president. In 2019-20, the college began offering its second bachelor degree (a Bachelor of Applied Science degree in Organization and Project Management) online; in 2020, the college launched Wildcat Reserve, a food and hygiene pantry to help eliminate food insecurity for students and their families; Western held its first-ever graduation ceremonies on the Carson and Fallon campuses in 2020; Western launched a Paramedicine program in 2020 and celebrated 11 graduates on Feb. 20, 2021; WNC restarted a program for incarcerated students in 2019; and celebrated a record 131 graduating Jump Start students in 2019. Dr. Solis has also guided and supported WNC Foundation through a $1.35 million capital improvement and relocation project for the biology lab on the Carson campus and the Foundation’s $800,000 workforce development project to build a mobile manufacturing training lab to directly serve individuals in remote locations and meet the needs of outlying companies that want additional training for their employees.

Register Now! More Classes to Choose from for Summer Session

WNC is planning to offer its largest number of courses for summer session in recent memory so don’t wait to sign up for classes.

Registration is already underway for summer session, which starts on June 14, and get the classes you want for fall by registering now.

Plan your future by referring to schedules on the college website at wnc.edu/class-schedule/.