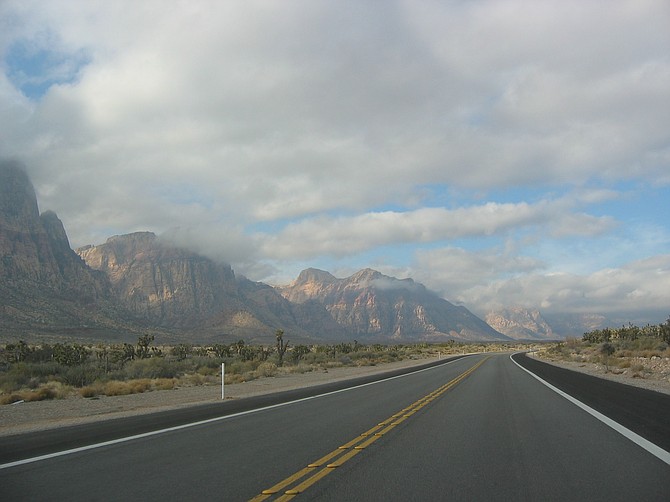 In fact, it’s a virtual oasis — and has been considered so for more than a century — that boasts a spring-fed stream, fields of lush, green meadows and tall shade trees.

Located 15 miles west of downtown Las Vegas via West Charleston Boulevard, the park sits at the base of the colorfully banded Wilson Cliffs, part of the Red Rock Canyon Area.

In addition to being one of the most scenic places in the Las Vegas area, the ranch predates the founding of the state of Nevada. In the mid-1830s, a campsite was established alongside the creek that winds down from the nearby mountains.

The presence of potable water and grass made the location attractive to travelers journeying on the Old Spanish Trail, which passed through Southern Nevada. Historians also note that the spot was a popular hideout for outlaws who preyed on pack trains.

In 1864, the area was claimed by an outlaw named Bill Williams, who maintained horses at the site. In the mid-1870s, James Wilson and his partner, George Anderson, filed for legal ownership of the site, which they named Sand Stone Ranch.

Anderson departed in the early 1880s and Wilson assumed control of the property as well as adopted and raised Anderson’s two sons. The two, Jim Wilson, Jr. and Tweed, inherited the ranch after their stepfather died in 1906.

The two operated the ranch for many years before selling it in 1929 to Willard George, a family friend who allowed them to live on the ranch until they died. They are buried with their adopted father in a small cemetery on the property.

George began to develop the ranch, adding a chinchilla farm (he was a Hollywood furrier by trade) as well as cattle. In 1944, George leased the ranch to actor Chester Lauck (he played “Lum” on the popular “Lum and Abner” radio show), the first of the ranch's celebrity owners.

Lauck purchased the property outright in 1948 and constructed an impressive New England-style cut sandstone and redwood ranch house, which remains standing and is open for tours.

Called the “Bar Nothing Ranch,” Lauck used the ranch as a vacation retreat and summer camp for boys, while raising cattle on the land.

In 1955, Lauck sold the ranch estate to Vera Krupp, wife of the German munitions manufacturer Alfried Krupp. Mrs. Krupp added a swimming pool and expanded the house and the cattle operations.

Mrs. Krupp, who made the ranch her principal residence, renamed it Spring Mountain Ranch. The ranch, with its manicured meadows and cool shade from the Southern Nevada heat, was a popular retreat for Mrs. Krupp’s celebrity friends.

The ranch was sold in 1967 to the Hughes Tool Co., which was part of the Howard Hughes empire. While Hughes never lived at the ranch, it served as a kind of retreat for executives in his Summa Corp.

In 1972, the site was purchased by Fletcher Jones and William Murphy, two Southern Nevada businessmen who announced plans to construct a large housing development. Public outcry resulted in the ranch being sold in 1974 to the Nevada Division of State Parks.

The ranch remains one of the most beautiful spots in Southern Nevada. The drive on the main road takes you through a small forest of Joshua trees and yuccas before the park seemingly erupts around you like a lush, green mirage.

The main house is open for self-guided tours when the park is open. Park hours vary by season so check out the website, parks.nv.gov/parks/spring-mountain-ranch, for updated information.

Additionally, guided tours of the 520 acres are offered by appointment and include visits to the Old Reservoir, the Wilson family cemetery, the 1880s board and batten cabin, an 1864 stone cabin and blacksmith shop and other ranch buildings.

The park also offers Living History programs with guides, in costume, demonstration ranch life and re-enacting historic events. The park is also a popular location for outdoor concerts in the spring and summer months.