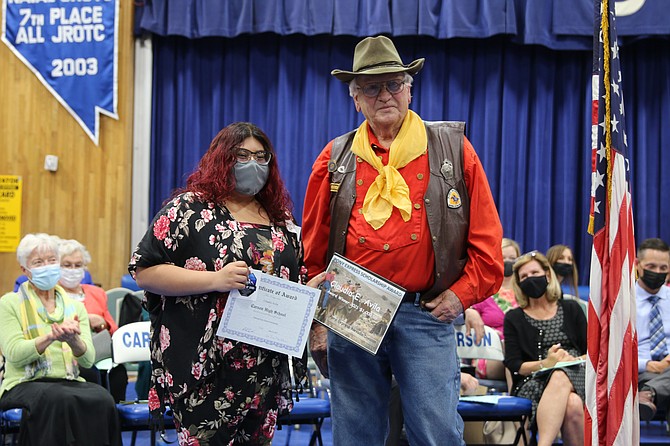 CHS Scholarships and band May 2021

More than 50 Carson High School seniors were recognized Tuesday for collectively earning more than $5.2 million in scholarships, a number that will continue to rise.
Their accomplishments, which highlighted the academic success of the Class of 2021, were celebrated in an awards ceremony in the CHS Big Gym.

“It is difficult to describe this year without using negative adjectives – it seems like being derogatory to our current state of affairs has been normalized – or it’s OK to wish the year away, to cast our gaze to the future in hopes of better times,” CHS Principal Bob Chambers said. “Instead of doing that, I propose that we celebrate your accomplishments, your accomplishments in the face of adversity. For a little perspective on this school year: The last class to graduate from Carson High School during a pandemic was the Class of 1918 and 1919 – due to the Spanish flu. You had to go through the year in either a hybrid model or an online model, or both. You had to actively choose your education, every single day. Not only did you succeed, but you also thrived.

“We applaud all the local organizations and community support who’ve made a lot of these scholarships possible,” he continued. “The Class of 2021 has really embraced the opportunities available to them, and I couldn't be more proud. I am excited about their futures and what they will do after high school.”

Chambers also noted the total amount of scholarships will continue to rise as graduation draws closer. Many applications have been extended due pandemic conditions, so the total in scholarships could be significantly higher than what is represented as of May 25

Carson High School would like to thank the Class of 2021 Scholarship sponsors and committee members who have made the following scholarships available to their students: