Truckee rolls in a 21-6 win over the Wave 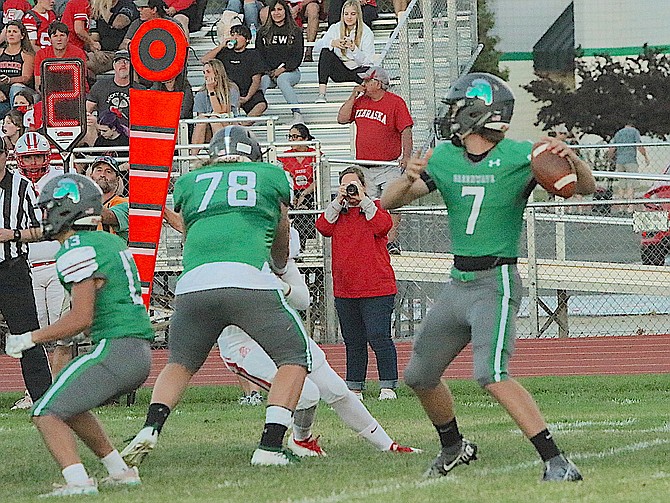 Planning and executing a game plan for Friday night has been an early-season challenge for Greenwave football coach Brooke Hill and his staff.

Because of the coronavirus testing for athletes and the snail-like rollout of the results, usually on game day, Hill and the Greenwave are struggling to find their rhythm like in Friday night’s Northern 3A non-division crossover game. He said it’s taking three to four days to receive results, which causes problems of shifting players like the coaches making the next move in chess. He also experienced the same problem prior to last week’s road game at Sparks. 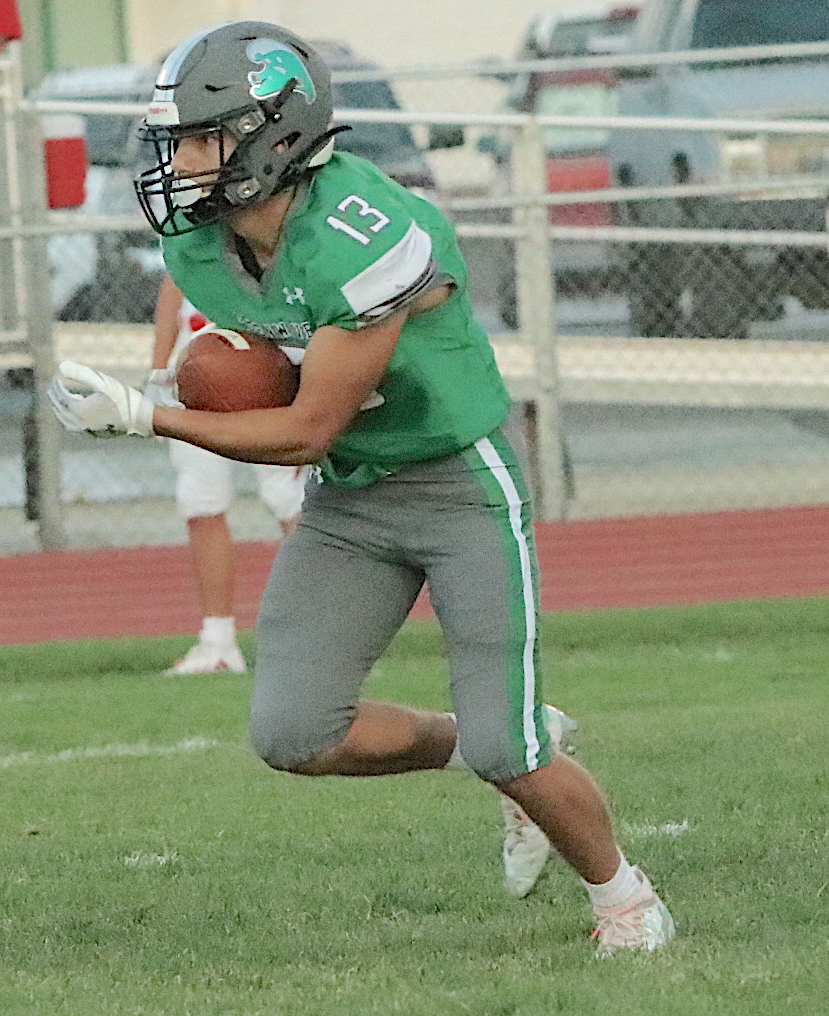 Steve Ranson/LVN
Fallon’s Everdmar Garcia takes off on a run against the Wolverines.
The Wave struggled for three periods against Truckee in the second home game of the year, falling to the Wolverines 21-6 at the Edward Arciniega Athletic Complex. The visitors scored a touchdown in each of the first three quarters, and Fallon put together one of its best drives of the season in the final quarter to avoid a shutout.

“We actually ran the ball well,” Hill said of the final drive that covered 80 yards in 10 plays. “If we can’t run the ball, it puts more on our passing game.”

The eventual scoring drive began with almost 6 minutes remaining in the game. Everdmar Garcia ran on three consecutive plays, gaining 13 yards. Once the Truckee defense focused on the junior running back, quarterback Keaton Williams then completed two of three passes to put the Wave on the Wolverine’s 35-yard line.

Williams’ first pass fell incomplete to Jace Nelson, but on the next two attempts, Williams competed a 32-yard pass to Reese Kincaid and found Nelson for a 5-yard hookup.

Garcia became the go-to player for the final four plays. The key run for Garcia was a 20-yard gain to give Fallon a first and goal from the 4-yard line.

Garcia carried the ball for a 2-yard gain before scoring on another 2-yard carry. Williams’ pass for a two-point conversion fell short. Garcia led the Wave with 62 yards, and Roland Grondin added 22 yards. 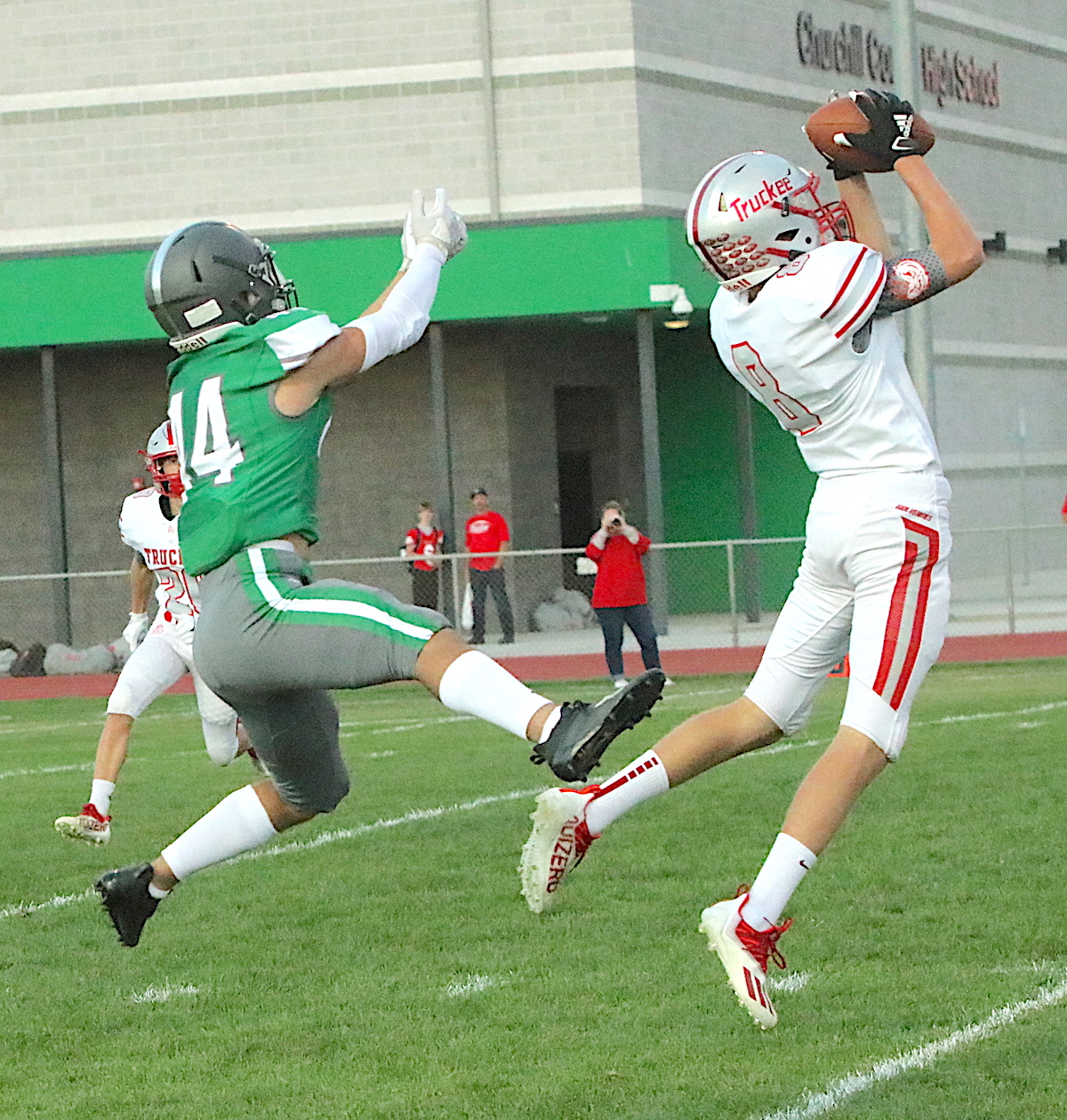 Steve Ranson/LVN
Reed Lopes of Truckee intercepts the ball intended for Fallon’s Isiah Diaz.
Truckee struck first against their longtime Northern 3A rivals by taking advantage of good field position. With 5:07 left in the first quarter, the Wolverines began their first scoring drive on the Greenwave 21. Jason Roth, who finished the night with 44 rushing yards, rolled in from the 3-yard line. Tavin Hamilton’s extra-point kick gave Truckee a 7-0 lead.
Both team’s played hard-nosed defense in the second quarter, but the Wolverines created some holes to complete an eight-play drive in the last 2:25. 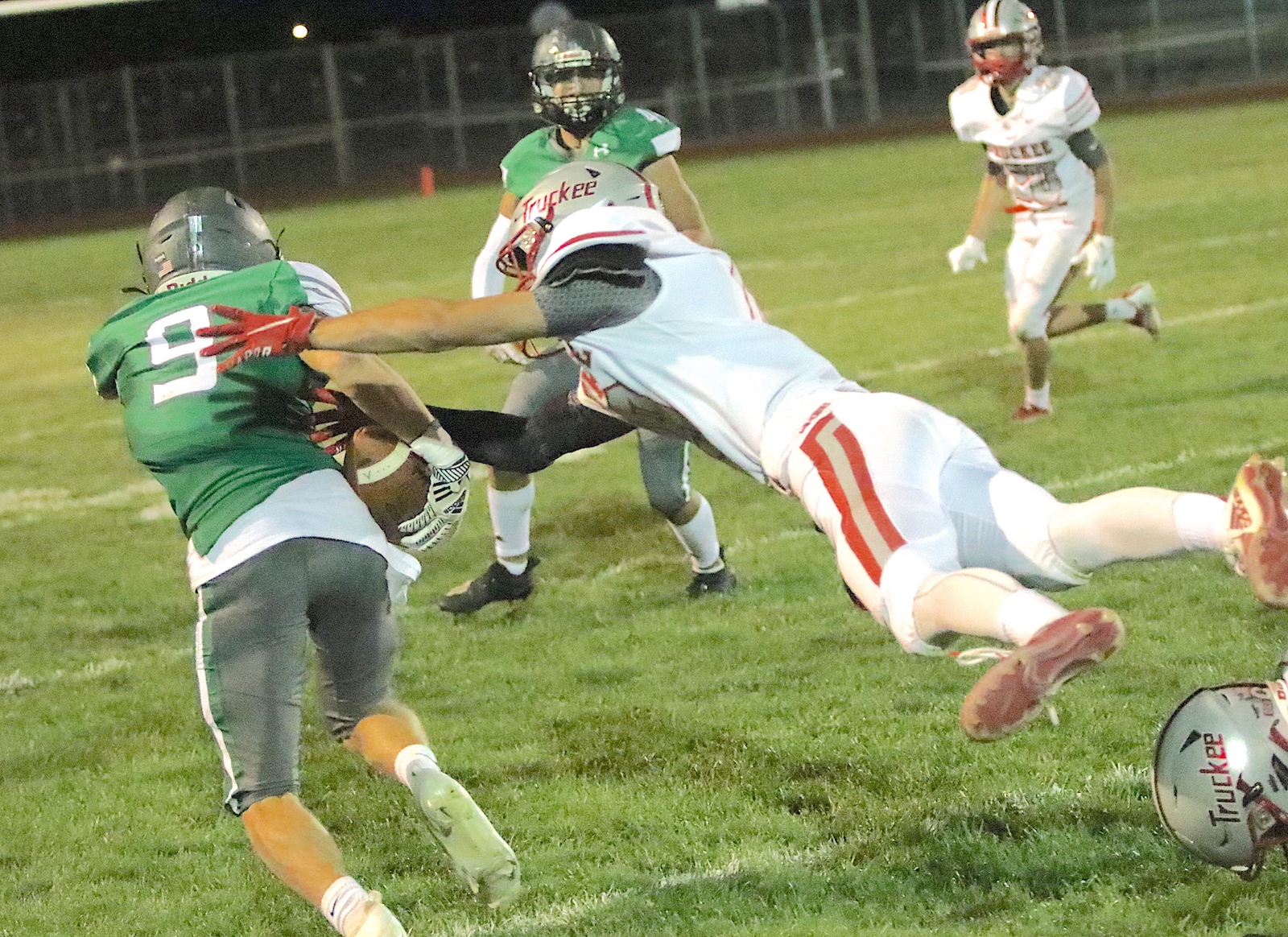 Hall, who competed 8 of 19 passes for 120 yards in the game, hooked up with Tyler Lamperti for a 2-yard pass for a touchdown, and Jario Zarate’s extra-point kick sailed between the uprights for a 14-0 lead.

On the ensuing possession, Fallon stalled on eight plays and punted.

Taking the ball on their own 20, the Wolverines pounded the turf for 11 straight running plays, capped by Carter’s 7-yard run. Zarate’s point after gave Truckee a three-touchdown lead, 21-0.

Steve Ranson/LVN
Jace Nelson (88) of Fallon tackles Truckee’s Jason Roth.
NEXT UP — Fallon entertains South Tahoe in another nonleague crossover game. The junior varsity play at 5 p.m., and the varsity follows at 7 p.m.

This will be the Vikings’ first game because of the mandatory evacuations from the South Lake Tahoe area due to the Caldor Fire. Hill said the Vikings are lacking practice time.

“All they have been able to do is scrimmage because of the fires,” Hill said.

Hill said he talked to the South Tahoe coach, and if the team can practice week, then there will be a game later this week.