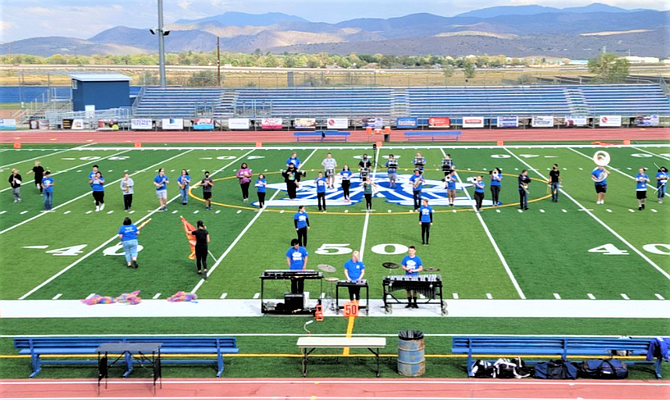 Homecoming happens all next week in celebration of Carson High School’s 150 years of life. Though there is way more to the story of the development of CHS, here is a simple overview filled with cuts and pastes written by others over the years.

In 1871, citizens of the Carson District took it upon themselves as a social responsibility to build an addition to an existing school house closest to the center of Carson City, and in 1874 a tax levy of $4,000 was appropriated. Carson High School was officially started. Requirements for education have changed significantly in the subsequent years, and on May 28, 1884, the Carson Daily Appeal informed the citizens of Carson City: “Children…must be given at least sixteen weeks of schooling each year, from and after their eighth birthdays until they are fourteen.” CHS, built on Division Street between King Street and Musser Street, like many state government buildings of the time, was constructed of stone from the Nevada State Prison Quarry. Eventually, a government entity, concerned with its proximity to an earthquake fault, determined the structure could not withstand a significant tremor, and the school was demolished; however, a separate high school was built on Thompson Street in 1939. It was made obsolete when a new high school was built on the Winters Ranch a few blocks west. In the 1980s, this building still sat, condemned, and it was demolished soon after. Bordewich Bray, two red brick buildings, along with a classroom building and gymnasium, is on the site now. Carson City continued to grow and the community recognized a need for yet another larger site for CHS. In 1970, a bond was passed, a site on the east side of town was selected, and another facility was built. CHS has seen several expansions and remodels since moving to its present location. The school was open for only a few years when it became overpopulated and was forced to go on double sessions to house the increased enrollment. A gymnasium was built with 12 additional classrooms to alleviate the overcrowding; the currently-standing completed facility included enclosing the street that separated the two original main buildings, creating a large multipurpose area affectionately called, Senator Square. An additional two story building was added on the southwest side which became the administrative offices, housed on the first floor and the science labs on the second floor. In 1999, faced with overcrowding again, the High Tech Center was constructed in conjunction with Western Nevada College. This facility added an additional 12 classes and six computer labs and provided CHS with a unique opportunity to blend college classes with its own curriculum. NJROTC classes and a rifle range were built in 2002, and since 2006 the renovations have continued on to include eight tennis courts and a concession stand complete with restroom facilities. In 2007-2008 a contemporary vision for the updating and redevelopment of the Athletic Complex was instituted, allowing CHS to host regional, zone and state championships. In the summer of 2011, solar panels were built to the east of the main building. As of 2011, CHS’ Main building is 306,479 square feet and sits on 65 acres.

SCAVENGER HUNT RESULTS ARE IN

The 2021 CHS Scavenger Hunt has come to an end, and sophomore Jacob Budd is the overall winner. Second place finishers are Maritza Alvarez and Neva Mellow, and a close race for third place finishers goes to Hailey Jeffries, Trevor Sease, Jacob Matthews and Eliza Miller, and the CHS social workers staff winner is Charleen Lawson. The school social workers would like to thank everyone for their participation, and winners will be awarded their prizes along with the picture in Senator Square! Thanks to all for being a part of the first event of the year, more to follow, and thanks to teachers for all they do for the students. ~ Contributed by School Social Worker Erik Tedrowe.

This year, Yearbook and Graphic Design classes collaborated to create a unique yearbook cover, one which would reflect the season in which CHS students find themselves. After a year of hybrid learning, all classes are back together fulltime and experiencing a unity missing from the 2020-2021 school year. The editors of this year’s yearbook wanted a cover which would reflect this unity and celebrate CHS’ 150th year. It is an exciting time to be a Senator. Lead by CHS teachers Cynthia Mills and Patricia Ababio, students worked together with the yearbook editors in the role of client and the graphic design students as designers. Mills said, “At the end of last year, the editors and I thought it would be awesome if the graphic design students designed our 2022 cover, so when school started, I emailed Ms. Ababio, and she was instantly on board. My editors went to her classes and explained to her students what the theme was, showed them the colors they had chosen, and talked about the overall feel of the book. When we received the PDF's, my editors were thrilled!” Senior Editor Scout Bourgeois said, “Seeing all the creative designs come in was exciting. We gave the graphic design class a lot of artistic freedom, and I am impressed with all the submissions. It was a lot of fun going through the covers, and I cannot wait for the students to see the special one we picked out!" Senior Devanie Woodward was just as excited saying, “Collaborating with the graphic design class was exciting for me. Asking those kids was the best decision that we made. Looking at all the finished PDF's, I was ecstatic to see what these classes created. It was super fun choosing a cover from them because I also got to see how excited the design classes were about each cover that was on the screen. We feel that the cover that we have chosen is perfect. It is bold, and we feel that it is a great tone for the school since we are all together again." The designer, whose art was chosen, is Elias Palumbo. He is an advanced studies graphic design student with a unique style and three years of experience from which to draw. Elias said about the experience, “I had a hard time coming up with a design. I went through about 3 and ended up merging 2 of them. I was told the colors represent the different classes. So I put a student inside their respective colors. I am honored my design was chosen for the 150-year anniversary.” All-in-all, it was a terrific experience for the yearbook and graphic design classes to unite in celebrating CHS 150th year with a yearbook and cover to celebrate this year’s reunification of students being back at school full-time. ~ Contributed by Patricia Ababio

CHS Football has recently released its Team Store link to purchase apparel and other items to support the athletic program. If anyone is interested, come on Carson City, everything is purchased online and picked up by yourself at Graphics Factory, very easy and seamless. Those planning to make a purchase will be able to do so next week. As many already know, the first game was cancelled last week because of the dangerous levels of smoke, but it appears there may be a reprieve the next two days to get in the freshmen and junior varsity games. The varsity game was moved from Saturday to Friday at 7:00 for various reasons and as of today teams are full steam ahead and planning to play. CHS Athletic Director and Head Football Coach Blair Roman thanks the faithful community of Carson City for all its support amidst some of these more hazardous times of poor air quality. To purchase some beautiful blue, gray, and black CHS colors, please visit shop.graphicsfactory.biz/chs_apparel_locker/shop/home.

BAND TO MAKE CHILI FOR NEXT FUNDRAISER

The CHS Band is beginning its fundraiser Sept. 20 with presale raffle tickets for $1 each. The raffle items are an assortment of gift cards, tickets, gift baskets, hotel stays, and other amazing items donated by the Carson City community. The Band will keep 100% of the profit, and a portion of each student's ticket sale will help fund their participation in band, with the remainder going towards band room improvements such as new instruments, shelving, and other essential equipment. For more information, please email CHS Band Director Nick Jacques at njacques@carson.k12.nv.us.

HOLIDAY CRAFT FAIR IS A GO

The school year is going well, and the Carson High Holiday Craft Fair is a GO for Nov. 19 and 20. There are a limited number of spaces available for interested vendors, so now is the time to make a decision. To sell, or not to sell…that is the question. There are 8x12 and 5x8 spaces available in Senator Square, and the craft fair needs adult volunteers to assist with admissions, raffle, vendor check-in, volunteer check-in, and parking assistance. The shifts are two hours long, and the hours are donated as a cash stipend to CHS students’ clubs, sports, or class. All proceeds from this event go directly to CHS students, and the craft fair also awards CHS Senior Scholarships, which go to the college of the senior’s choice. Please contact Cathy Barbie at 882-8109 for more information.

Nominated by his teacher, Nicole Fagundes, Julian Dale, a senior, becomes the CHS Student of the Week. About Julian, Fagundes said, “In his Economics class, Julian is polite, works hard, and represents Carson High with integrity; I appreciate his great attitude.” In addition, Julian has been on the CHS mountain bike team all four years of his high school career, and his mountain bike coach added to this award by saying Julian is a mentor to his younger teammates and an excellent role model. CHS is lucky to have him as a representative of the school. Congratulations to Julian on gaining the positive attention of his teacher and being nominated as the CHS Student of the Week. Employees within Carson City School District nominate the CHS Student of the Week, and it is often the students’ teachers who do the nominating though anyone in the district may do so by sending an email to pbrady@carson.k12.nv.us.

SENIOR IN THE SPOTLIGHT

Pioneer Academy Senior Keegan Castberg continues to excel despite current and past hardships. Though COVID 19 continues to change what “normal” is and challenges PHS students to succeed under ever changing rules, Keegan has learned how to push through the difficult times. Losing his mother at an early age forced him to adapt to new conditions, and, with the support of his grandmother and his brother, he found his inner strength to be a success when everything seemed to be conspiring against him. Keegan struggled at Carson High, then transferred to Pioneer High School. He developed strong relationships with his new teachers at Pioneer, and he credits them for giving him an inspiration to learn again. Keegan, who spends his spare time at the gym or hiking around Lake Tahoe and Fallen Leaf Lake, or just listening to some good music, is finishing his senior year as a JumpStart student taking courses at Western Nevada College. He plans to pursue a major in creative writing and minor in photography. His goal is to write screenplays and travel the world. PHS wishes Keegan the best as he writes his own story of success. ~ Contributed by PHS Counselor Cary Jordan.