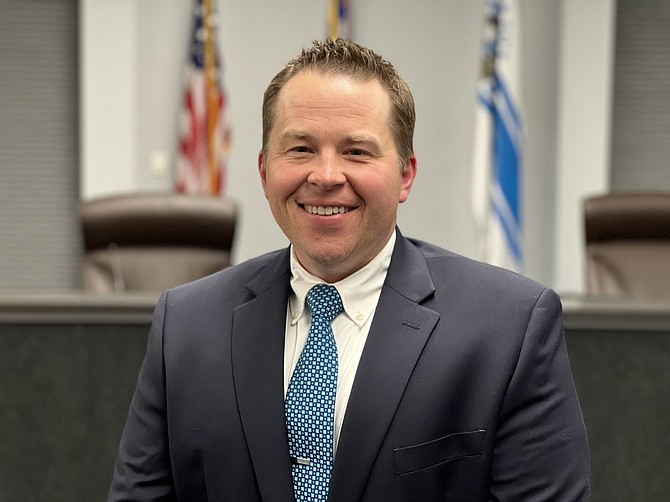 The Carson City School Board on Wednesday voted unanimously to offer a contract for superintendent to Andrew Feuling, CCSD fiscal services director.
The decision came after discussion about “a flawed search process” and concerns along with about three hours of public comment.
Feuling was initially the board’s runner-up candidate. Wednesday’s vote, at a special meeting, took place after former candidate Dr. John Goldhardt, the board’s first choice, rejected a contract offer March 25.
Trustee Joe Cacioppo said the board came to the special meeting hoping to hold a “reasonable discussion” about an imperfect system.
Cacioppo said he’d heard concerns about the board’s choice in choosing the Nevada Association of School Boards as its third-party consultant to vet its candidates and the vote to proceed with Goldhardt.
“I have to question if it isn’t good for that process, is it good to move the next candidate up, then do we start the process over again?” he said. “Starting the process over again, we cannot just advertise next week. … The general thought is, in my head, I’ve heard from at least four trustees the process was questionable. I’m leaning toward, ‘We need to start over.’”
Trustee Laurel Crossman said she was concerned that reopening the search and waiting six months would result in the same quality candidates the board previously received, and while it was early in the conversation, she indicated she was not decided.
“And I understand people want change,” she said. “Anyone who steps in, even if it’s an internal candidate, it’s still going to be change. It’s someone who has different strengths, perhaps different weaknesses.”
Varner said he was opposed to reopening the position.
“I feel very, very good about offering the position to the second choice,” Varner said. “I think Mr. Feuling would be an excellent candidate. I think he has a good track record. This has been a hard process for the board, the staff and community. I think we have a quality candidate we can move forward with.”
During public comment, district staff members and members of the public expressed support for Feuling. Administrators, teachers and parents with multiple children in different schools all spoke of his qualifications and their desire to keep someone familiar with CCSD’s inner workings in the top job.
“We need to listen to our community,” Empire Elementary School Principal Susan Squires said. “These people are your community. Mr. Feuling is your community. He’s at your soccer games. He’s at your baseball games. He is with your community members and helping us to be better educators for all of your children. … They have told you what they would like to have done, yet they are unhappy.”
Others were disappointed in the process.
Some felt the deliberations held before the vote during the March 22 meeting, when the board voted 6-1 to deny the contract with Goldhardt and directed board President Richard Varner to go back with the original proposal, provided grounds for Open Meeting Law complaints or that Crossman or Mike Walker had violated their code of conduct by not respecting the majority vote.
Two Open Meeting Law complaints are under investigation.
During the March 22 meeting, Crossman and Walker expressed concerns with Goldhardt’s counterproposals, his candidacy and the process.
“I’m sad because what I see before me is the corruption that has reached the level of our local school board,” Carson City resident Lee Elliott said Wednesday. “We’re saddled with an antiquated way with selecting a school board that opens the way for corruption.”
Some thanked the board members for their obligation or commitment to the district or asked the community to acknowledge the difficulties occurring within the district for staff or to help students in need.
Alyssa Smith, who has been teaching at Carson High School for six years, said she has been “appalled” by the community’s treatment of the board or staff members during the search process.
“You are doing a job – nobody wants to do this,” Smith said. “This is my nightmare. We have a substitute teacher shortage, a teacher shortage and it’s only getting worse. I’m 29 years old, and I’m seeing people leave this profession every day. … Thank you because I have teenagers who yell at me. … I would like to invite every single one of you who has an issue to take a step into my shoes.”
Trustee Don Carine made the motion to approve Feuling as the next superintendent and direct Varner to offer the terms of the original contract, with Walker seconding.
The original contract was for one year at a base salary of $170,000.
Feuling, as he entered the Robert Crowell Board Room in the Carson City Community Center, received a round of applause from a full room of community members waiting for the meeting to begin. Some rose from their seats as he entered, and he also was applauded after the vote was complete.
He told the Appeal after the meeting he had not expected the applause. He said he hoped to help the district and its staff and students be successful and would seek opportunities for growth.
“I think it’s part of the obligation, if you’re in public service and you’re in a community and you’re trying to do good by everyone there, and these are people that I see on a daily basis, some on an hourly basis, some on a weekly basis and just so many good people and wanting to do right by them and making sure they can be successful in what they do,” he said.
“I think if you’re part of the community, you’re part of an organization, you want it to be successful. You want it to grow and you want it to be better, and any opportunity to do that for the amazing people in this community is just an honor.”