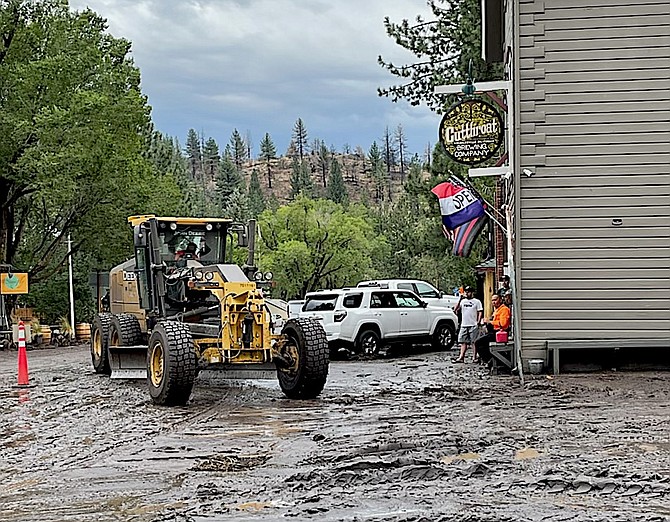 Downtown Markleeville digs out after a flood brought 1.82 inches to the town, closing Highway 89. Photo by Stephen Hibbs

As of 11:45 a.m. Thursday, the California Department of Transportation reported that Highway 89 between Turtle Rock Park Road and Montgomery Street in Markleeville remains closed after mud and debris washed out part of the roadway on Wednesday.

CalTrans Officials say there is not estimated time to reopen the highway. The only way in and out of Markleeville is east over Monitor or Ebbetts Pass while crews clear the mud.

More showers and thunderstorms are expected to develop today and Friday, according to the National Weather Service in Reno.

A flash flood watch remains in effect for most of the Sierra Front through 10 p.m. tonight.

“The additional heavy rain on top of what has already fallen this week will continue the threat of flash flooding, particularly near burn scars, small creeks, and steep terrain,” forecasters said.

As much as 2.49 inches of rain brought mud and debris into the historic town of Markleeville on Wednesday evening.

Flooding closed Highway 89 between the Alpine County seat and Woodfords, which left Monitor Pass as the only route into town.

The California Highway Patrol reports that Highway 89 will remain closed until Thursday morning.

"That mud appears to have been delivered by Millberry Creek, which runs alongside the highway from the north," said Stephen Hibbs who was in town during the flooding. Storm clouds obscured the high Sierra and into Carson Valley during the storm that prompted a flash flood watch for much of the Sierra Eastern Front and Western Nevada.

Fredericksburg resident Jeff Garvin reported receiving .78 inches of rain from the storm. The flash flood watch will continued through Thursday evening as wet monsoons bring thunderstorms to the region.

Alpine County issued an emergency alert for flash flooding near Markleeville and along highways 88 and 89 near Monitor Pass at 4:25 p.m. after 2.27 inches of rain fell in Markleeville over the course of an hour.

Highway Patrol confirmed several debris flows crossing Grover Hot Springs Road with large boulders on the road,” according to the flash flood warning. “Excessive rainfall over the burn scar is resulting in debris flows moving through the Tamarack burn scar. The debris flow can consist of rock, mud, vegetation and other loose materials.”

Markleeville and Holbrook Junction, according to the Weather service.

• Holbrook Highlands, off of Highland Way near the green water tank, off Highway 395

Douglas County is bracing for the possibility of flooding in the burn scars after the National Weather Service in Reno issued a flash flood watch for noon today through Thursday evening.

“Heavy rainfall could trigger flash flooding of low-ling areas and debris flows in and near recent burn scars,” forecasters said. “Residents and those recreating in and immediately next to recent burn scars should prepare for potential flooding impacts.”

Forecasters advised residents to be ready to move to higher ground should a flash flood warning be issued.

The watch covers a broad region of the Sierra eastern slope east to the Mineral-Nye county line.