Fodder: Time for some ‘Packnamara’ at Mackay Stadium? 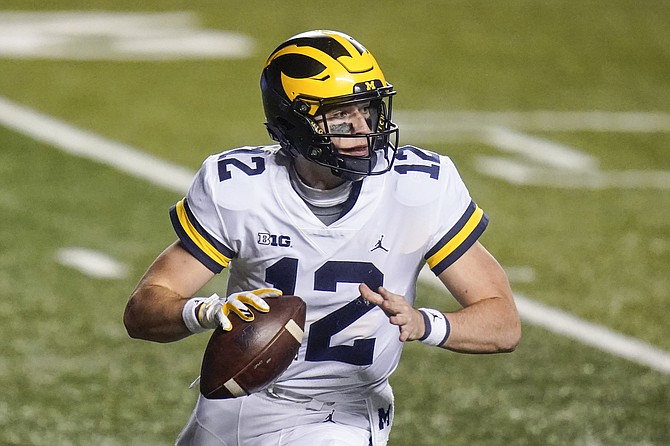 It is Nevada Wolf Pack perfection. One of Northern Nevada’s own comes back home to turn the Wolf Pack football program around. What better way for the Wolf Pack to restore its severely damaged connection to its Pack-apathetic community? And all it might take is a simple text followed by a phone call.

Damonte High graduate Cade McNamara, the Nevada high school record-holder for passing yards (12,084) and touchdown passes (146), is now in the NCAA’s transfer portal and looking for a new home to play his final two years of college football. McNamara spent the last four years at Michigan (redshirting in 2019 and getting an extra year of eligibility in 2020 because of COVID-19), throwing for 3,181 yards and 21 touchdowns. He led Michigan to the Big Ten title in 2021, beating Ohio State, Penn State, Wisconsin, Iowa and others along the way. He played in the semifinals of the College Football Playoff that season, falling to Georgia. This past season he suffered a knee injury and played parts of just three games (beating Jay Norvell and Colorado State in the season opener).

Now that he’s had his taste of big-time college football does he want to come back to Northern Nevada and become a hometown hero and a legend? The Wolf Pack owes it to Northern Nevada and to its struggling football program to find out. McNamara’s father Gary, after all, was a Wolf Pack assistant baseball coach when current Pack football head coach Ken Wilson was a Pack football assistant. Wilson, a former college baseball player himself, was frequently seen in the Peccole Park press box watching baseball games. So, there is already a strong connection between the McNamara family and the Pack. McNamara can save Pack football from itself. Think of the T-shirt possibilities. McPack. Packnamara. Make it happen.

McNamara is arguably the best quarterback that Northern Nevada has ever produced. Hug (Bart Hendricks), Reno (Jeff Dankworth), Wooster (Glenn Carano) and McQueen (Jeff Rowe) graduates will certainly argue that. But McNamara is certainly in the conversation, given that no high school quarterback in the state’s history has ever passed for more yards or touchdowns. And then, by the way, he went on to lead Michigan to a Big Ten title. McNamara was offered scholarships when he was at Damonte by, among others, Notre Dame, Michigan, USC, Georgia, Alabama, Wisconsin and, yes, even San Diego State and Nevada. He first chose to become the next Joe Montana at Notre Dame and then changed his mind to become the next Tom Brady at Michigan. Maybe now he would like to become the next Colin Kaepernick at Nevada.

McNamara was just 10-years-old and likely was a bit impressed when Kaepernick and the Pack beat Boise State in 2010, sending Pack fans dancing in the streets. There is a solid Kaepernick-McNamara connection already. Kaepernick left Nevada to go play for Jim Harbaugh with the San Francisco 49ers and got to a Super Bowl. McNamara is now coming off four years under Harbaugh at Michigan after getting to the College Football Playoff. Pack fans are more than ready to go dancing in the streets once again and McPack or Packnamara is just the quarterback to do it.

There are a few factors, of course, that would make the Pack’s chances of signing McNamara slim at best. First of all, there would be tremendous pressure on McNamara at Nevada. Galena’s Luke Babbitt and Hug’s Armon Johnson experienced the pressure of trying to leading the hometown college to greatness in basketball. But take the pressure Babbitt and Johnson felt in basketball and quadruple it for McNamara as the Pack quarterback. The Pack didn’t think the pressure would overwhelm McNamara back in January 2017 when it first offered him a scholarship and it would certainly be a non-factor now. The young man, after all, beat Wisconsin in front of 74,855 at Camp Randall Stadium, Nebraska in front of 87,380 at Memorial Stadium, Penn State in front of 109,534 at Beaver Stadium and Ohio State in front of 111,156 at Michigan. Beating Boise State in front of the 15,000 that showed up at Mackay Stadium this year won’t faze him.

The biggest hurdle the Pack will have to cross when it comes to enticing McNamara to come home is that god-awful 2-10 record that featured a season-ending 10-game losing streak. McNamara has just two years of eligibility remaining and he’s coming off a knee surgery. He might not have enough time to turn this Pack football program around, at least not to Kaepernick 2010 levels. But McNamara should know that nobody is expecting the return of the 2010 Pack anytime soon. Northern Nevada would be happy with the Ty Gangi 2018 Pack right now. The Pack might also have a secret weapon when it comes to recruiting McNamara this offseason. It already has a former Michigan player on its roster. Defensive back Darion Green-Warren was a McNamara teammate in Ann Arbor in 2020-21. He was a backup this year at Nevada with five tackles in 11 games. Make sure he gives McPack a call, too.

Jay Norvell is widely regarded as the biggest traitor in Wolf Pack history (Jeff Horton would also get some first-place votes in that poll, too) for the way he abruptly abandoned the school for, of all places, Colorado State last December. But Norvell and Horton really don’t come close to the biggest traitor in school history, who was also an undercover spy. The Wolf Pack once had among its ranks a walk-on offensive lineman in the summer of 1949 who was actually an assistant coach for the team (Cincinnati) it was scheduled to open the season against in mid-September. Jack Faulkner, who played three seasons at Miami of Ohio under coaches Sid Gillman and George Blackburn from 1946-48, was a 23-year-old walk-on from Youngstown, Ohio, for the Pack and head coach Joe Sheeketski in 1949. He didn’t stay long at Nevada — he was named an assistant for Gillman at Cincinnati in late August that year — but he had already completed his mission. Faulkner’s wife Debbie told of her husband’s espionage in his Los Angeles Times obituary in 2008. “As Debbie tells it,” the obit reported, “Faulkner enrolled at the Nevada university, made the football team and would call Gillman almost daily with scouting reports. The Nevada team didn’t pick up on it until they arrived in the visiting team’s locker room (at Cincinnati) and noticed Faulkner’s picture on the wall as a coach with the opposing team.” Faulkner’s work as a Gillman spy was also mentioned in Michael MacCambridge’s excellent 2004 book on NFL history titled “America’s Game.” The Pack, by the way, beat Cincinnati 41-21 so Faulkner, a long-time college and NFL coach, was a much better coach than spy.

It probably shouldn’t shock anyone that Faulkner would agree to move to Nevada, enroll at the school and spy on his new team for a few weeks and then slip away. Goofy stuff like that used to happen all the time in college sports in the 1940s, especially immediately after World War II. The NCAA didn’t really exist yet, there were few rules and players would basically go to the highest bidder. The Pack, which gave players questionable casino jobs in the 1940s, filled its roster with talented transfers like Marion Motley, Stan Heath, Dick Trachok, Tommy Kalmanir and many others before the money ran out after the 1949 season. Many players came back after serving time in the war and played for another school under another name. So don’t blame the Pack for not having any clue about Faulkner’s true identity. It was clearly a don’t ask, don’t tell era of college football.

Faulkner was a product of his wild and anything-goes era. His wife Debbie detailed her husband’s rowdy lifestyle in his obit in the Los Angeles Times. “People used to say the party didn’t start until Jack Faulkner got there and had his first drink,” Debbie told the Times. The obit also added that Faulkner had a photo of himself with Hollywood’s famed Rat Pack (Frank Sinatra, Dean Martin, Sammy Davis Jr., Joey Bishop, Peter Lawford) and one of John Wayne, who, according to Debbie, was “the only man who could drink him under the table.” Faulkner’s time as a Wolf Pack spy likely made him the first true member of the Rat Pack.

The UNLV Rebels never fail to amaze the world of college football. That amazement, of course, is usually centered around on how awful its football program has been decade after decade. But this time it reached a new level of silliness. The Rebels fired head coach Marcus Arroyo this week just hours after Arroyo and the Rebels beat Wilson and the Pack, 27-22, on Saturday in Las Vegas. The 42-year-old Arroyo is widely considered one of the top young coaches in the nation. He was an assistant at San Jose State, Wyoming, California, Southern Mississippi, Oklahoma State and Oregon from 2003-2019 before getting the Rebel job in 2020. He also spent a year as the quarterbacks coach for the Tampa Bay Bucs (pre-Tom Brady) in 2014. Arroyo, a tremendous motivator, lost his first 14 games at UNLV but won seven of his last 16, including a 5-7 record this year that saw him lose starting quarterback Doug Brumfield to injury for the bulk of the second half of the season. Arroyo’s first season was during the trying COVID-19 season of 2020 when he went 0-6 and did a remarkable job simply keeping the program alive. He started 0-8 last year but five of the losses were by eight points or less. And two of the blowout losses were to Arizona State and Iowa State. He certainly didn’t deserve to get fired after winning five games and winning back the Fremont Cannon. But current UNLV athletic director Erick Harper, a former Kansas State defensive back, got the job this past January. He didn’t hire Arroyo. But he certainly fired him.

We’re beginning to think that winning the Fremont Cannon game doesn’t mean as much as it used to. Arroyo is not the first Wolf Pack or Rebel coach to win the Cannon game and then get rewarded by getting fired almost immediately. The Wolf Pack dumped Brian Polian in 2016 just hours after he beat the Rebels. UNLV dumped Tony Sanchez actually before he stunned the Pack at Mackay Stadium in overtime in his final game in 2019. Arroyo, Polian and Sanchez are all the proof you need to know that the Fremont Cannon doesn’t always save jobs. But it might get you fired. Jerry Scattini was fired in 1975 after losing his final game to UNLV. The same happened to UNLV’s Bobby Hauck in 2014 after he lost to the Pack.