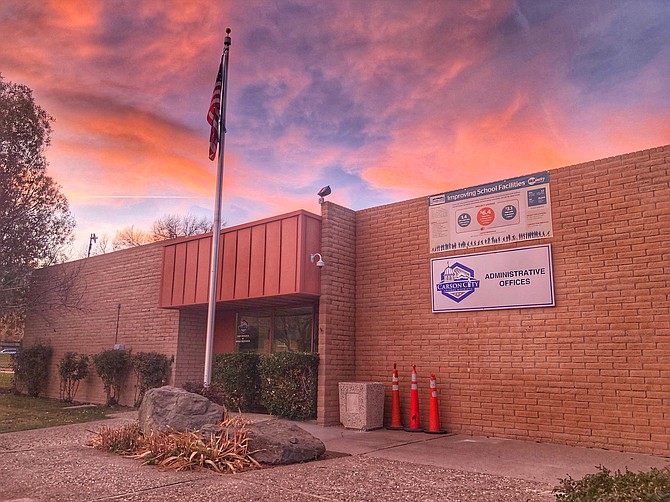 The Carson City School District Board of Trustees meeting begins at 6 p.m. Tuesday with a full agenda that includes presentations of the 2022-23 board-sponsored “American Citizen Essay Contest” winners, a preliminary update on the district’s 2022 cohort graduation rates and possible action for completing the superintendent’s evaluation for the 2022 calendar year.

The annual American Citizen Essay Contest began in 2002 and is announced annually in September of each school year. Students are invited to honor the memory of Sept. 11, 2001. The Board of Trustees established a fund and awards prizes of $100, $50 or $30 to the top three winners at the elementary, middle and high school levels. Essays are asked to be more no than five pages typed or handwritten and to follow a theme. The trustees will announce the winners on Tuesday.

Associate Superintendent Tasha Fuson will announce the district’s 2022 cohort graduation rates, which includes a discussion of the number of non-graduates and transiency for the class of 2022. Rates are preliminary and will have to be approved by the Nevada Department of Education, which will release statewide graduation rates at a later time.

Superintendent Andrew Feuling will report on his site visits to district campuses, departments and programs and provide discussion and possible action to approve suggested changes to the district’s strategic plan.

Board President Richard Varner and members of the board will hold a discussion and take possible action on the process for completing Feuling’s annual evaluation for the 2022 calendar year. Feuling began as superintendent in July, but the trustees have said they would like to consider assessing and revamping the evaluation process and level of objectivity. In August, the board held a workshop to discuss what other Nevada school districts, including Churchill, Humboldt, Lyon and Storey, have done to rate their top official and even used out-of-state sources from Iowa, Kansas and New Jersey.

Feuling also will give a first reading of and discuss changes to CCSD policy 805 on emergency operations of schools, and Fuson and CHS implementation specialist Candi Ruf will present on a renewal application for the district’s work-based learning program.