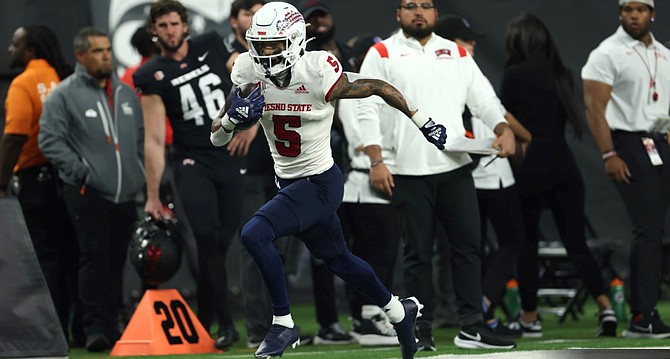 Fresno State Bulldogs wide receiver Jalen Moreno-Cropper put his quarterback and his team on his back last Friday night.

“I dropped my first pass,” Moreno-Cropper said. “But I told (quarterback) Jake (Haener) that I had him the rest of the night.”

Moreno-Cropper caught eight passes for 164 yards and two touchdowns to help the Bulldogs (6-4, 5-1) outlast the UNLV Rebels, 37-30, at Allegiant Stadium in Las Vegas.

Haener, who completed 28-of-34 passes for 313 yards and three touchdowns, connected with Moreno-Cropper from 66 yards out to give Fresno State a 34-27 lead with just under nine minutes to go. They also combined for a 33-yard touchdown pass for a 7-3 lead.

“Everything is clicking for our offense right now,” said Moreno-Cropper, who has caught at least one pass in 33 consecutive games.

The Bulldogs, No. 4 in this week’s Nevada Appeal Mountain West football rankings, can clinch the West Division title and a spot in the conference title game on Dec. 3 by beating the Nevada Wolf Pack on Saturday at Mackay Stadium.

No. 1 Boise State (7-3, 6-0) can clinch the Mountain Division and a spot in the conference title game by beating Wyoming on Saturday.

“It feels good to be sitting at the top of the West Division,” Moreno-Cropper said.

The Bulldogs weren’t sitting on top of the West just a little over a month ago. Fresno State has now won five games in a row, the longest win streak in the league, to surge to first place. The last time the Bulldogs lost a game was Oct. 8 at Boise State, 40-20, to fall to 1-4 overall (0-1 in conference) on the year.

“We proved again as a team that we can play with anybody when we play well,” UNLV head coach Marcus Arroyo said.

The Rebels need to win at Hawaii on Saturday and beat Nevada in Las Vegas on Nov. 26 to become bowl eligible for the first time since 2014.

“We’re now at the end of the season and it means something for the first time in a long time,” Arroyo said.

Boise State whipped No. 11 Nevada, 41-3, in Reno to remain in first place in the Mountain Division. The Broncos, who lost at home to the Wolf Pack last season, dominated the game from start to finish. Boise State, making its first appearance at Mackay Stadium since 2018, felt right at home in Reno in a game played in snowy conditions and cold.

“I loved it,” Boise State senior defensive tackle Scott Matlock said. “I was having a blast out there. It was snowing. It was slippery everywhere. It was cold. Being out there with your brothers, it was kind of like playing ball in the backyard.”

It was as close to a home game as possible for the Broncos, minus Boise State’s blue field.

“The guys certainly enjoyed playing in the snow,” Boise State coach Andy Avalos said. “We train in this. The guys we have from California and Texas, I always ask them if they ever paid attention in their geography class and knew where Idaho is.”

No. 2 Wyoming (7-3, 5-1), though, would jump into first place in the Mountain Division by beating the Broncos on Saturday at home. The Cowboys avoided an upset last weekend by beating No. 9 Colorado State, 14-13, in Fort Collins, Colo., in the Bronze Boot rivalry game.

“We certainly dug ourselves a hole in the beginning,” Wyoming coach Craig Bohl said of 10-7 (at halftime) and 13-7 (in the fourth quarter) deficits. “But the effort was great for a young team to go on the road and keep believing in itself.”

Colorado State’s Tory Horton returned a punt 72 yards for a touchdown and a 7-0 Rams lead early in the first quarter. Horton also caught eight passes for 168 yards. The former Nevada wide receiver, though, also fumbled away a punt return in the fourth quarter at his own 33-yard line, leading to Wyoming’s game-winning touchdown, a 32-yard pass from Jayden Clemons to Alex Brown, with 10:47 to play.

“This game goes down as one of the classic Wyoming-Colorado State rivalry games,” Bohl said. “It was a very physical game.”

San Diego State quarterback Jalen Mayden was 17-of-22 for 268 yards and three touchdowns and also ran for 61 yards on 13 carries. His touchdown passes all came within a span of 17-plus minutes in the second and third quarters (66 yards to Tyrell Shavers, 17 to Mekhi Shaw and 20 to Jesse Matthews).

San Jose State quarterback Chevan Cordeiro connected with Elijah Cooks on a four-yard touchdown pass and also scored on a 3-yard run himself for the Spartans’ early 14-0 lead.

San Diego State’s Jordan Byrd, though, turned the game around with a 95-yard kickoff return for a touchdown with 4:45 left in the first quarter. Byrd’s touchdown started a 38-0 run for the Aztecs.

“We didn’t start out the game the way we wanted but we came together,” San Diego State coach Brady Hoke said.

The victory also made the Aztecs bowl eligible.

“They thoroughly outplayed us,” Brennan said. “That’s my fault.”

No. 7 Utah State (5-5, 4-2) outscored Hawaii 41-34 at Honolulu. Ike Larsen, a freshman, returned an interception 36 yards for a touchdown and a 41-24 lead with 4:33 to play. Larsen, who had two interceptions, a sack and six tackles, was named the Mountain West’s Defensive Player of the Week and Freshman of the Week on Monday.

“He has a phenomenal career ahead of him,” Utah State coach Blake Anderson said. “I’m glad he’s wearing our colors.“

“They (Hawaii) just wouldn’t go away,” Anderson said. “We didn’t play our best and we made a lot of mistakes that didn’t allow us to put this game away the way we would like. But I will never take a win for granted.”

Utah State, which won the Mountain West title last season, needs to win at least one of its final two games to become bowl eligible. The Aggies will host San Jose State on Saturday and play at Boise State on Nov. 25.

“I’d love to take this team to a bowl,” Anderson said, “and celebrate how hard they’ve worked and keep building.”

The Nevada Appeal’s Mountain West football rankings for the week of Nov. 14: