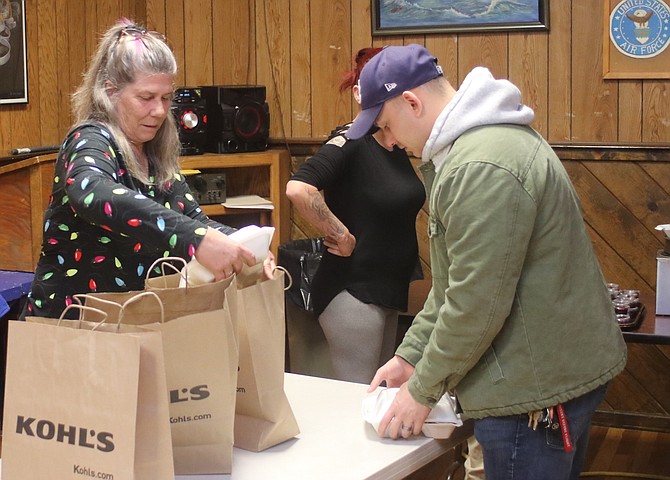 Volunteers prepare meals for delivery as part of the Wheels on Meals program conducted last year on Thanksgiving by American Legion Post 16.

American Legion Post 16, its auxiliary, other military organizations and volunteers will deliver Meals on Wheels dinners on Thanksgiving since the William N. Pennington Life Center (senior center) will be closed.

Sailors, current and retired military personnel and community members wishing to deliver meals or prepare meals for delivery should arrive at the hall, 90 N. Ada St., between 8:30-9 a.m.

Once volunteers arrive at the hall, they will pack food into containers and then drive different routes within the city limits and in the county to deliver hot meals to the area senior citizens. The American Legion normally seeks about 30 volunteers to help with the preparation and/or delivery.

The American Legion post also provides the volunteers and donations to buy turkeys and all the fixings.

Their annual Thanksgiving dinner for the community is from 11 a.m-1 p.m.

The Lawton-Silva Post 1002 of the Veterans of Foreign Wars is celebrating its 100th anniversary on Saturday at 405 S. Maine St.

The opening ceremony begins at 2 p.m., and it’s free.

Included in the afternoon’s celebration are a carnival, food for purchase, an auction, raffle and historical exhibits. Members from all branches of service currently belong to the VFW.

Since Nov. 16, 1922, the local VFW chapter has provided a century of service to Fallon and the Lahontan Valley community. Fallon Mayor Ken Tedford has been invited to present a proclamation plaque.

The VFW’s purpose is to help veterans who fought overseas, the military and communities. The VFW is the country’s largest and oldest war veterans service organization.

The dedication of a new VFW hall on Maine Street didn’t occur until 23 years later near the end of World War II.

The post is named after Pvt. Alexander Silva of Fallon was killed in battle on July 18, 1918, in France, and Army Gen. Henry Lawton who died on Dec. 15, 1899, in the Philippines when a bullet killed him.