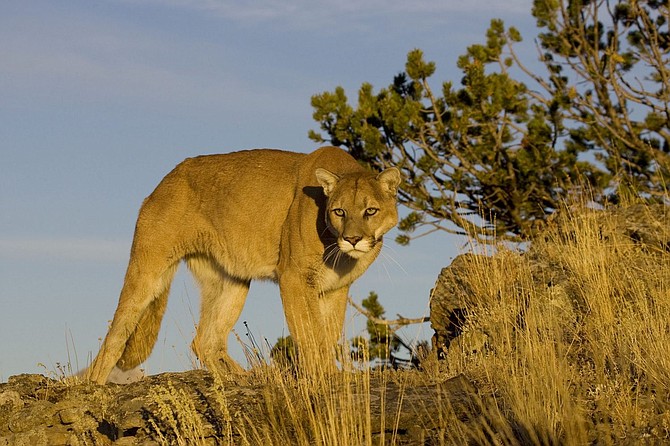 The Nevada Department of Wildlife is wrapping up an investigation into an encounter between a 14-year-old girl and a mountain lion Thursday, Nov. 10 in the Virginia Foothills south of Reno, according to a news release.

The girl was walking her dog, a Great Pyrenees, on Terry Way a short distance from her home, when she noticed a small mountain lion stalking her, the release said. NDOW game wardens say the girl followed all the proper steps to deter the mountain lion, including facing it, throwing rocks and yelling.

However, after she was somehow knocked to the ground, potentially as a result of her dog being spooked, the mountain lion pounced on the girl. The animal immediately released her and ran away. Aside from a minor puncture on the girl’s leg from what appears to be the mountain lion’s dewclaw (the thumb), the girl and her dog are both safe.

Game wardens determined the mountain lion was a public safety threat due to its dangerous behavior and its lack of fear of a human yelling and the presence of a dog. Game wardens contacted the USDA’s APHIS Wildlife Services, a separate federal agency, which located and euthanized the mountain lion after confirming it was the animal involved in the attack.

“This is extremely strange behavior from a mountain lion. Usually these are very elusive animals, and it’s rare to see a mountain lion, let alone be approached by one,” Nevada Department of Wildlife Public Information Officer Ashley Sanchez said in the release. “We suspect the mountain lion, which was emaciated, either attacked out of desperation for food, or this was practice hunting behavior for the animal based on its small size and the fact that it immediately ran away.”

NDOW has since received calls of additional mountain lion activity in the Virginia Foothills that game wardens are investigating. The area is full of juniper trees and brush, which is common mountain lion habitat.

“While mountain lion attacks are very rare, we live in prime mountain lion habitat here in western Nevada. We’re surrounded by abundant wildlife, including deer and small mammals. Wherever there is prey, there will be mountain lions,” Sanchez said. “We advise people to take some simple steps to deter mountain lions from their property.”

• Remove anything that might attract deer or other prey animals. This can include birdseed, pet food, trash or compost, water features, fallen fruit, excess shrubs, woodpiles, decks, or other structures that can provide cover or a place to den.

• Make efforts to discourage deer from being present in your yard – deer are one of the top food sources for mountain lions, so if they are in your yard, a lion could be too.

• Install devices to scare away the lions – motion-activated lights and/or sprinklers are a place to start.

• Closely supervise children whenever they play outdoors. Make sure children are inside before dusk and not outside before dawn. Talk with your children about lions and teach them what to do if they encounter one.

Find resources for living with mountain lions, and safety tips to protect your family and pets on NDOW’s website: https://www.ndow.org/blog/living-with-mountain-lions.