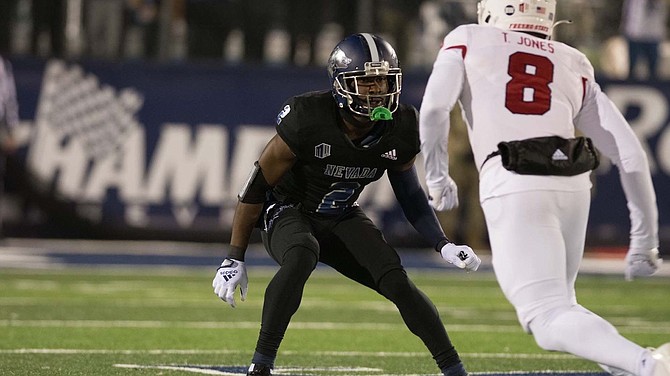 Grading the Nevada Wolf Pack’s 41-14 loss to the Fresno State Bulldogs on Saturday at Mackay Stadium.

The 6-foot-9 right-hander was as inconsistent and sloppy as he has all been all year, completing just 16-of-38 passes for 243 inflated yards, two touchdowns and two interceptions. Cox did what he does best when all else fails (which is far too often), running the ball 10 times for 56 yards. But even on one of those plays he fumbled the ball away once on a sack. Cox also did what he does best in another area, piling up resume-padding, meaningless stats with the game out of reach.

In the first half, though, when Fresno built a 24-0 lead at the break, Cox and the Pack offense was dreadful. Cox completed just 3-of-13 passes for 27 yards over the first two quarters. In the second quarter he was 0-for-7. The Pack offense never advanced past its own 45-yard line in the entire first half. Cox was then intercepted twice in the second half, one of which was by a defensive end. Both of Cox’s touchdowns and nearly 90 percent of his yards for the night came in the second half with Fresno State already celebrating its West Division championship. More than half of Cox’s yards for the game (142) came on three passes, all in the second half, 41 and 73 yards (touchdown) to Dalevon Campbell and 28 to B.J. Casteel (touchdown). But even the 73-yard touchdown, which saw the Fresno State defender simply fall down, was less a work of art than Cox and Campbell merely looking like two buddies out in the park all alone playing catch. The touchdowns, with the Pack down 20 and 34 points, had all the feel of someone walking out of the stadium at a Reno Aces game and finding a free gelato coupon on the sidewalk.

Toa Taua had 93 yards on 17 carries and he also caught four passes for 18 yards. It was a solid performance for the fifth-year senior on Senior Night. Taua would have gone over 100 yards if not for a 9-yard loss on one third-quarter disaster. He also had three carries for 11 yards wiped out by three Pack penalties.

It wasn’t a perfect night for the veteran Pack back. He, after all, didn’t get into the end zone and more than half his rushing yards (58-of-93) came on two runs. But it was a commendable effort against the best team in the division. Taua had a 21-yard run on his second carry of the night and a 37-yarder on his third carry of the second half.

But instead of attacking Fresno’s defense when it was on its heels and continuing to feed Taua the ball after those huge runs the Pack continued to spread the ball around to the rest of its inconsistent roster. The rest of Taua’s evening consisted of just 15 carries for 35 yards. Nine of his 15 carries were for three or fewer yards. It was like watching someone on a New York street corner operating a shell game by using a softball and a walnut shell. There wasn’t a whole lot of mystery or deception to it.

Dalevon Campbell had three catches for 120 yards, which included a 73-yard touchdown for the longest Pack passing play this year. His 120 yards are the second most on the team this year (B.J. Casteel had 149 against San Jose State two games ago). Campbell, though, caught just three of his 11 targets. Casteel had five catches for 63 yards, including a 28-yard score. The touchdown came with just 1:44 left in the game as the clock was about to strike 11 p.m., long after most of the crowd of 12,501 was likely off in some other establishment or their living room trying to forget what they just saw.

Casteel was targeted 13 times so Cox completed just eight of his 24 passes to Casteel and Campbell. It was like watching someone trying to toss a quarter onto a six-inch plate 10 feet away at a carnival. So give Cox, Casteel, Campbell and Spencer Curtis (three catches, 41 yards), the Pack’s thankfully soon-to-be forgotten 4C passing attack, for at least winning a few stuffed animals before the night was over.

The Pack offensive line might have turned in the best performance on the team on Saturday. This group has certainly had more difficult nights this year. The run game was solid with 146 yards on 30 carries for a 4.9-a-carry average. Take away one 6-yard sack and the Pack ground game actually averaged 5.2 a carry). The fact the Pack allowed just one sack despite falling behind 17-0 in the first quarter is a victory for the offensive line. Cox, make no mistake, was under pressure most of the night. Fresno State defensive end David Perales did seem like a permanent member of the Pack backfield at times. So it wasn’t a perfect effort by the Pack front, of course.

Cox was trapped for a 5-yard loss on one run, Taua was smothered on a 9-yard loss and wide receiver Jamaal Bell lost seven yards on an awful call in the fourth quarter. Isaiah World and Grant Starck were each called for a hold and Andrew Madrigal had an illegal snap, though he did recover a Jamaal Bell fumble.

Dom Peterson, playing his final game at Mackay Stadium, had just two tackles. He teamed with fellow defensive lineman James Hansen to trap running back Jordan Mims for a 1-yard loss. Thomas Witte, a sophomore, had his first sack of the year and just his second tackle over the last three games.

But it was Dwight Togiola who kept this game from being a total disaster for the defensive line. Togiola, a freshman, had three tackles, two for a loss, and a sack. He sacked Fresno quarterback Jake Haener in the second quarter and dumped Bulldogs wide receiver Zane Pope for a 3-yard loss after a catch in the fourth quarter.

Naki Mateialona had six tackles, though none that made Fresno State miss much of a beat. He did drop wide receiver Jalen Moreno-Cropper after a 2-yard gain on a run and had two other tackles after 3-yard Fresno gains. Chris Smalley had a pair of tackles, teaming with James Hansen to stop Jordan Mims on a 3-yard gain and dropping Mims by himself after a 1-yard gain. Drue Watts, though, had just two tackles (stopping Mims on carries of one and four yards) after averaging five a game over the first 10 games. He was also called for roughing the passer and targeting on Haener. Fresno State averaged 4.9 yards a carry on 33 carries. Mateialona was the only Pack defensive lineman or linebacker with more than three tackles.

Haener completed 29-of-42 passes for 361 yards and two touchdowns and wasn’t intercepted. The Wolf Pack had numerous breakdowns in its defensive backfield against the pass and run. Haener, for example, double-pumped on his first touchdown pass with no pass rush to speak of and had all day to throw to a wide open Mac Delena for a 22-yard score in the first quarter. No Pack defender was within 10 yards of the throw.

Defensive back Micah Lilo, a sophomore, had three tackles and a sack. Bentlee Sanders had eight tackles while Tyson Williams, Emany Johnson, Zeke Robbins and Jaden Dedman each had five tackles. But someone had to make the tackle after the 27 Haener completions that didn’t end up in the end zone as well as the handful of runs by running backs Jordan Mims and Malik Sherrod that sliced through the defensive line and linebackers.

The highlight of the evening might have been the Wolf Pack recovering an onside kick late in the third quarter after the 73-yard touchdown pass to Campbell. The ensuing Pack drive ended on a ridiculous interception thrown by Cox to defensive end David Perales on the third play of the fourth quarter. But you still have to admire the Pack’s courage to call an onside kick and its execution. a

Matt Freem punted five times (all in the first half) and averaged 41.2 yards. His longest punt was 46 yards to the Fresno State 25 and his best punt was 40 yards to the Fresno State 16. The Pack did not attempt a field goal but could have tried twice if not for electing to go on fourth down on two drives late in the game from the Bulldog 20 and 25-yard line. Drue Watts was called for holding on one kickoff return.

Ken Wilson’s team wasn’t the first in college football history to come out on Senior Night and basically give the game away in the first quarter. But the Pack’s Senior Night fun truly ended with the opening kickoff.

It was plain to see that the Pack wasn’t any more ready to play this game than they were on Monday or Tuesday. The Pack was called for six penalties (all on the offense) in the first quarter and another was declined. Fresno State scored two touchdowns and had a field goal on its first three drives. This is not the first time Wilson’s Pack did not show up for a game. See Iowa, Air Force and Boise State. You could also toss in the Colorado State and Hawaii losses to awful teams. And there was the complete meltdown to Incarnate Word after building a 17-3 lead.

Nobody expected much in the way of championships this year. But Wilson’s Pack is simply not putting up much of a fight week and after week, even at home. And even on Senior Night.

The Wolf Pack was simply outclassed on Saturday. The Pack defense far too often looked like a bunch of 3-year-olds on the playground chasing after a greyhound. The sight of lightning quick Fresno State running backs and wide receivers being chased down the middle of the field from behind by a Keystone Cops Pack defense will be difficult to forget. And the Bulldogs were having so much fun the starters didn’t want to leave.

Fresno State should not have had starting running back Jordan Mims and starting quarterback Jake Haener on the field with 7:23 to go and a 34-7 lead. Mims went 82 yards right up the middle against the Pack Keystone Cops to start the drive and Haener capped off the four-play, 97-yard piling-it-on drive with a 1-yard sneak for the score. That was not necessary. At least Boise State had enough class to pull its starters in the third quarter the week before (in a 41-3 pounding of the Pack).

But don’t blame this ugly loss on greedy Fresno State coaches and players. Blame it on a Wolf Pack program that for the first time in about two decades can’t wait for the season to end. But judging by the embarrassing crowd of 12,501 on Senior Night (the smallest home attendance since 10,027 watched a win over Idaho on Dec. 3, 2011), they aren’t the only ones glad to see this season come to a close soon.