For Pack and Rebels, season comes down to a big cannon 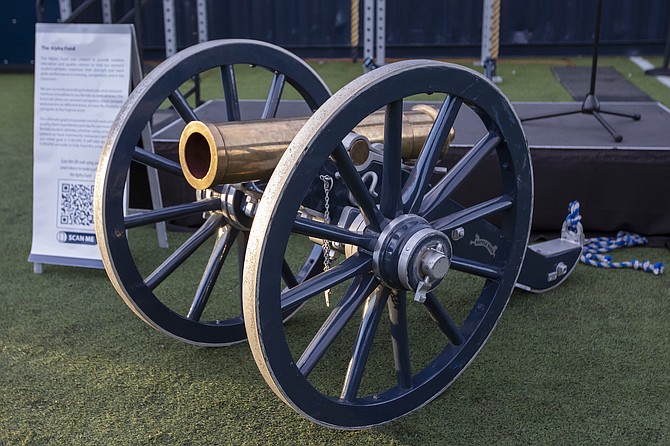 HOW TO WATCH, LISTEN: Nevada Sports Net has announced that it will broadcast the game in Northern Nevada. The game will also be available on The Mountain West Network, at themw.com/watch. It will be televised in Southern Nevada on the Silver State Sports and Entertainment Network.

The game can be heard in Northern Nevada on 94.5 FM.

THE SPREAD: UNLV by 12. The last time UNLV was favored by double digits against Nevada was 2001, when it opened as 15-point favorite and dropped to an 11-point favorite by kickoff. The Rebels won that year, 27-12, at Mackay Stadium.

LAST YEAR’S MEETING: The Wolf Pack whipped UNLV, 51-20, at Mackay Stadium in 2021 as Carson Strong completed 37-of-49 passes for 417 yards and four touchdowns. The Wolf Pack defense had five sacks and three interceptions. Two of the interceptions were returned for touchdowns by Daiyan Henley (50 yards) and Tyson Williams (49 yards).

THE HEAD COACHES: Nevada’s 58-year-old Ken Wilson is 2-9 overall in his first season and still looking for his first Mountain West victory (0-7). UNLV’s Marcus Arroyo, 42, is in his third season as head coach with a record of 6-22 overall and 4-16 in the Mountain West. This is the least successful (eight career wins combined) head coaching matchup ever in the rivalry. Arroyo was an Oregon assistant from 2017-19 as offensive coordinator. Wilson was an Oregon assistant as linebackers coach and co-defensive coordinator in 2020 and 2021.

WILSON VS. UNLV: Wilson will become the eighth Wolf Pack head coach to coach against UNLV. But the long-time assistant is certainly no stranger to the rivalry. Wilson was a member of the Wolf Pack coaching staff for 19 UNLV games (1989-98 and 2004-12). He is 17-2 against UNLV, with the only losses coming in 1994 and 2004 (both in Las Vegas).

WILSON COULD MAKE HISTORY: A loss at UNLV would make Wilson the first Wolf Pack head coach to lose all of his conference games in one season. Three others, though, did come close if not for games that ended in regulation in a tie. Buck Shaw was 0-4-1 in the Far Western Conference in 1928, Brick Mitchell went 0-4-1 in the FWC in 1934 and Gordon McEachron went 0-4-1 in the FWC in 1956. Wilson’s Wolf Pack would also become the first team in school history to lose 10 games in a row in the same season. The 1964 team lost its first nine before winning its season finale.

NEVADA LAST WEEK: Nevada was beaten 41-14 by Fresno State last Saturday at Mackay Stadium. Jake Haener passed for 361 yards and two touchdowns for Fresno State as the Wolf Pack finished the season with a 1-5 record at home, its fewest home wins in a season since 2000, when it went 1-4 at Mackay.

UNLV LAST WEEK: The Rebels were upset at Hawaii, 31-25. Doug Brumfield passed for 288 yards and a touchdown for the Rebels and also rushed for 55 yards on 18 carries.

AT STAKE FOR NEVADA: The Fremont Cannon.

There is also the matter of finally snapping a nine-game losing streak. The longest losing streak the Wolf Pack has ever taken into the UNLV game before this season was four, in 1999.

AT STAKE FOR UNLV: The Fremont Cannon.

WHAT NEVADA NEEDS TO DO TO WIN: The Pack would like its defense to show up. Nevada has given up 30 or more points in four of its last five games (exactly 41 in each of its last two). UNLV quarterback Doug Brumfield, who missed two-plus games this season with a concussion, is one of the most dynamic offensive players in the Mountain West. He is second in the conference with 210.9 passing yards a game (1,898 total for the year) and has also run for 257 yards. His 239.4 average yards of total offense is second in the conference. The Rebels also feature running back Aidan Robbins (922 yards, 10 touchdowns in 10 games). Robbins has 155 more yards this season than the Wolf Pack’s Toa Taua on just one more carry.

WHAT UNLV NEEDS TO DO TO WIN: The Rebels, once again, have simply forgotten how to win, a skill they only discovered earlier this year after winning four of their first five games. Brumfield getting back on the field has restored the swagger to the Rebels’ offense the last two weeks. But the Rebel defense has disappeared, allowing 30 or more points in five of the last six games. A struggling Nevada offense that has completed just 54 percent of its passes, thrown for just six touchdowns and run for just 3.2 yards a carry, though, should be enough to restore some confidence to the Rebel defense. The Rebels held Nevada running back Toa Taua to 17 yards on eight carries a year ago. That will be the plan again on Saturday.

PREDICTION: UNLV 28, Nevada 28. Yes, a tie. The exhausted teams merely shake hands as Saturday night turns into Sunday morning and agree to paint the Fremont cannon in red and blue stripes. That would be a fitting ending for two teams with losing streaks of six and nine games. But don’t be shocked if the game comes down to the field goal kickers and UNLV wins it, something along the lines of 15-12 on nine combined field goals. UNLV’s Daniel Gutierrez has made 9-of-10 field goals over the last two games and has scored 29 points. Nevada’s Brandon Talton has been injured most of this season and has just one field goal since Week 3. So he might be rusty. But if he’s able to get on the field on Saturday he could salvage his injury-plagued season. But literally almost anything can happen when two struggling teams meet with a cannon at stake as midnight approaches in Las Vegas.