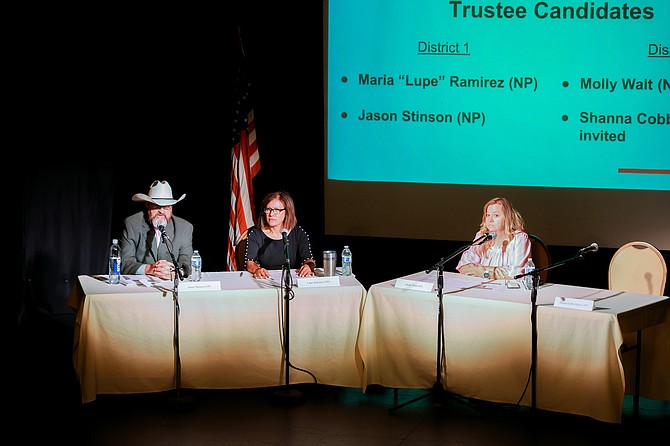 Candidates were provided an opportunity to give an opening statement, two minutes to respond to questions with 30 seconds for rebuttal, and a closing statement.

In the post-COVID era, a recent concern among families has been the district’s response to declines in student academic performance.

Incumbent Ramirez, running for her second term, has lived in Carson City for 36 years after being born and raised in Jalisco, Mexico. She retired from Western Nevada College and said she would like to continue giving back to the community and increase parent involvement, noting she has been satisfied with the public education her own daughter has received in Carson City. Ramirez said the board has been addressing any drop in student achievement by having schools create intervention programs for students not performing to standards.

“We do have a system in place to help those students,” she said.

Stinson, a husband and father of six, said he was running for the seat to see the “good ol’ boys” system dissolved. He said he believed any poor academic issues in the district weren’t just due to COVID-19 but to parents pulling their children out of classrooms nationally as public schools offer “poor curriculum.”

“We need to hold parents accountable along with students,” he said. “Parents aren’t showing up to board meetings. We think teachers are private babysitters. We need to step up.”

Molly Walt, CEO of Nevada Rural Counties Retired and Senior Volunteer Program (RSVP), moved to Carson City in 1994. She has taught for 19 years in various teaching positions in Northern Nevada, including at Eagle Valley Middle School.

“That is something that has escalated from the pandemic,” Walt said. “We lost our truancy officers. It depends on the budget. I would love to see middle school and high school truancy officers. I want to get students back into the classroom in order to achieve.”

The three candidates discussed challenges about retaining skilled teachers in a time when budget constraints and the transition from the Nevada Plan to the Pupil-Centered Funding Plan in June 2019. The Legislature’s attempt to bring a base level of resources to adequately fund schools and students of all populations remains in its early stages.

“The (PCFP) formula isn’t working and I don’t believe it’s working for any school district throughout the state of Nevada,” Walt said. “It’s hard to … say how are you going to retain and recruit teachers, because we’re in need of teachers and paraprofessionals. Bus drivers, I don’t believe we can continue to push out our zoning through buses and expect these kindergarteners and first graders to get to school if we continue to push where they’re going to get bus service. With the budget, it’s going to be an uphill battle.”

The candidates differed on how to keep schools safe. Stinson expressed his displeasure with what schools have done in the past to ensure safety. He referred to the mass shooting on May 24 at Robb Elementary School in Uvalde, Texas, in which authorities say Salvador Ramos, 18, fatally shot 19 students and two teachers.

Stinson said he would like to focus on locking and securing doors more efficiently. In conversations he said he has held with Carson City Sheriff Ken Furlong, getting truancy officers back into place would help restore accountability and increase student achievement.

He also said he wanted to allow for one volunteer staff member — an anonymous school administrator or teacher to be known only by the school board and superintendent — who was willing to carry a concealed weapon and receive the proper training by government or law enforcement officials.

“If you take away that soft target, you eliminate mass casualty events like (Uvalde),” Stinson said.

Ramirez said she felt campuses are safe for students.

“We do have a strong relationship with the sheriff’s office,” she said. “I feel that we have a safe place on campus for our students and for our employees.”

Walt said it’s unfortunate that any active shooter incident is possible, but it’s also a reality.

“I think training the students, training the teachers is always important, but I have to say as a parent, I have been impressed with the actions the Carson City School District has put forward,” she said.

She also said the district cut its truancy officers due to budget constraints but wanted to see the middle and high schools rehire for these positions again.

The candidates also answered questions from the audience about school choice, how to respond to bullying, and who is responsible overall for curriculum and deciding what public school students are taught.

The candidates also discussed whether it was appropriate to ban books or certain content from the schools, to which they all agreed it was not.