A matchup unlike any other

Carson, Douglas football meet with postseason berth on the line 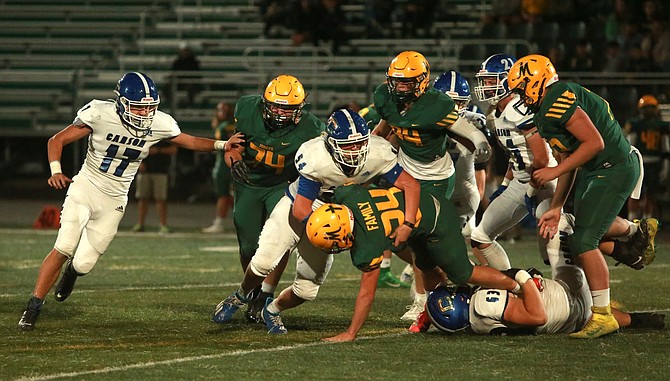 Friday evening brings another installment of the best rivalry in the state of Nevada.

Carson High football will host Douglas at 7 p.m. as the two schools continue the tradition of battling for The Rivalry Trophy.

Though both teams will enter with just one win on the season, spectators and fans know that the record book is almost meaningless when these two schools meet in person.

For Senator head coach Ryan Boshard, it won’t be an introductory taste of The Rivalry, but it will be his first meeting with Douglas as head coach.

“I’d hate to be a first-year head coach and have to give the trophy back,” said Boshard. “It means a lot to me as a head coach to make sure these boys are ready to give it their all and compete.”

Last season, Carson beat Douglas 17-15 on the last play of the game in which kicker Isaac Avina hit a 20-yard field goal as time expired.

It doesn’t take much for either coaching staff to get its team up for this game.

While Carson is coming off a 77-28 loss to Bishop Manogue, the Tigers had a bye week to get healthy and prepped for arguably the most important game of the season.

The Senators will have to prepare for Tiger linebacker Cole Smalley (No. 42), who leads the state in tackles this season as a junior.

“He’s a great asset to that defense,” said Boshard of Smalley. “I feel if we just play our game and do our job, we will be OK.”

Carson’s running game will of course dictate how successful the Senators are on offense.

Marcus Montes leads the team this season with 343 rushing yards while Parker Story has 234 yards.

In order to have success moving the football, Boshard feels the Senators will have to make sure the Tigers don’t get their linebackers into gaps.

The Tigers are expected to have 30 players dressed Friday

“This is a rivalry game so we’re going to get the best out of everyone on that side,” said Boshard. “We are going to expect a very physical game, just like we did last year.”

Looking at the Tigers

Boshard said junior lineman Jordan Tabaracci is the only player who might miss Friday’s game.

Douglas’ offense is averaging nearly 100 yards per game through the air while putting together another 150 yards per contest on the ground.

Owen Evans (No. 4) will be the Tiger quarterback tasked with making the right reads for Douglas.

Evans has run for 230 yards this season, so both teams have quarterbacks capable of breaking out into space.

Much like years past, the Tigers will rely heavily on their rushing attack, putting the weight on junior Connor Jackson’s (22) shoulders as he has posted 522 yards and five scores this season.

The winner will not only bring home The Rivalry Trophy, but will likely grab the final playoff spot in the Class 5A North region.