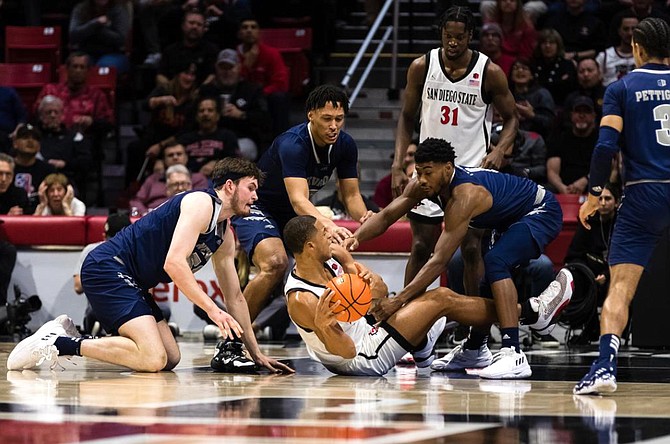 The Wolf Pack simply needed more from Jarod Lucas against one of the best defenses in the Mountain West. Lucas, still the second leading scorer in the Mountain West at 16.7 points a game, had just 11 points against the Aztecs on 3-of-10 shooting. More than half (six) of his 11 points came in the first seven minutes of the second half with the Pack trailing by double digits. When the Pack needed him the most in the first half he was 1-of-5 from the floor for five points. The 6-3 shooting guard is too important to the fragile Pack offense for him to muddle through a performance like on Tuesday night. In the final 14 minutes of the first half he was 0-for-2 from the floor and in the final 13 minutes of the second half he was 0-for-3. That is simply not enough shots from the team’s most explosive shooter.

Blackshear never quit fighting and competing. But it was like watching a puppy chase a squirrel in the backyard or bark at birds in a tree. Cute, yes. But also frustrating. The Pack point guard never could find his or his teammates’ rhythm and change the inevitable outcome that seemed destined from the opening tip. Blackshear was an ugly 6-of-18 from the floor, missing all six of his 3-point shots, to finish with 12 points in 36 minutes. He’s had tough shooting nights before in his Pack career but this time it just felt extreme. The 12 misses from the floor are the most he’s had in his two-year Pack career, suggesting he was simply taking on too much responsibility in the offense and trying to force things. Half of his points came in a span of under three minutes in the first half. He missed his final four shots in the first half and four of his last five in the second half. Blackshear also didn’t get to the free throw line at all for the first time this season, which is alarming given that he took 18 shots. He’s now had just one free throw attempt over the last two games combined.

The Wolf Pack center had seven points and three rebounds in 20 minutes. All seven of his points came in a span of just under three minutes midway through the first half as the Pack cut the deficit to 28-19. Baker was basically invisible over his other 17 minutes, not scoring a point, missing all four of his shots with two rebounds. Baker didn’t have an assist, steal or block. He played 11 minutes in the second half and didn’t score, taking just three shots. The Pack outscored San Diego State 15-3 over the final 4:50 with Baker on the bench.

Coleman scored just one point in his 28 minutes, taking just two shots. His only two shot attempts were 3-pointers in the first two minutes of each half. Over the last two games Coleman has scored just one point in 59 minutes combined, taking just four shots. Yes, the Pack is trying to win while playing four against five on offense. Coleman is very good on defense. San Diego State’s best offensive player, Matt Bradley, was 5-of-14 from the floor for 17 points. But, last we checked, 17 points is still more than one. Coleman needs to show he is at least a threat on offense. His teammates – the ones responsible for taking most of the shots and scoring most of the points – will thank him.

The 6-6 freshman is maturing right before our eyes. Williams stood toe-to-toe with the Aztecs, especially down the stretch in the second half, and gave the Pack something truly positive to take out this one-sided loss. Williams refused to quit and go quietly. He finished with 10 points on 4-of-8 shooting (2-of-5 threes) with six rebounds and four steals in 32 minutes. But in the final four-plus minutes he was the best player on the floor. After sitting the bench for nearly six minutes, Williams was sent back on the court with 5:42 to play and the Pack down 68-50. He then had a steal and an assist on a Blackshear layup with 4:14 to. His steal led to a Nick Davidson dunk with 2:41 to go. His rebound led to a Davidson jumper with 1:55 to go. He also had an offensive rebound and layup with 48 seconds to play. With Williams on the floor the final 5:42 the Pack outscored the Aztecs 15-6.

Davidson, right now, is the best sixth man in the Mountain West. The 6-8 redshirt freshman had a team-high 17 points in 20 minutes off the bench against the Aztecs, connecting on 5-of-10 shots and 6-of-6 free throws. Davidson did miss 4-of-5 threes but he made up for it with a team-best seven rebounds, four on the offensive glass. Six of his points came off three of his offensive rebounds. Over the last two games Davidson has been the Pack’s best player by far, scoring 32 points in 47 minutes off the bench, hitting on 11-of-22 shots, 7-of-7 free throws, 3-of-10 threes, with 16 rebounds (11 on offense). The starting five could use his offense and hustle but Davidson is flourishing in his current role. Davidson played 11 minutes in the first half and scored four points. He played nine minutes in the second half and scored 13 points, eight coming in the final 4:50 when he teamed up with Darrion Williams to make the final score respectable.

Pettigrew played just three minutes in the first half and committed a foul. The 6-3 freshman, however, was outstanding in the second half, playing the final 10:29 and scoring seven points on 3-of-3 shooting with three rebounds and a steal. He also assisted on a Davidson jumper in the paint. The Pack outscored the Aztecs 22-11 while Pettigrew was on the floor over those final 10-plus minutes. Pettigrew has scored 12 points in 28 minutes over his last two games.

Powell played just seven minutes and had a pair of rebounds and a foul. At 6-5, 220 pounds and with a year at Seton Hall, it would seem that Powell has yet to tap into his potential this year. He’s scored just eight points over 32 minutes over the last four games combined. So far, at Seton Hall and Nevada, he’s scored three or fewer points in 26-of-30 career games while averaging just eight minutes a game.

Foster was a non-factor, playing 10 minutes with a steal and a foul. He played six minutes in the first half without a stat and four minutes in the second half when he picked up his foul and a steal. He didn’t even play at all the final 10:29 with the game out of hand.

The Wolf Pack seem overwhelmed from the start by the crowd (12,183) at Viejas Arena and by the Aztecs. San Diego State jumped out to a 10-0 lead the first three-plus minutes and 14-3 over the first five minutes. The Pack turned the ball over three times and missed their first four shots in the first four minutes. Nothing Alford did seemed to snap the Aztecs out of their comfortable rhythm all night long. Why did Darrion Williams sit out for nearly six straight minutes in the second half? Why did Nick Davidson play just 20 minutes, given that he is extremely hot right now and three starters (Lucas, Blackshear, Baker) have been mediocre at best the last two games? Why give Will Baker 20 minutes on a night when he was obviously struggling? Why didn’t Alford tell Kenan Blackshear to stop shooting (his 18 shots were by far the most of any Pack player) on a night when he couldn’t hit water with a shot while standing on the pier at Mission Beach or Ocean Beach?

Don’t let the final score fool you. The Wolf Pack was never in this game. The Aztecs led by at least six over the final 37 minutes and by at least 8 the last 30 minutes. The Pack never went on a run because they couldn’t hit threes (just 5-of-25) or slow down the Aztecs offense (25-of-50 from the floor). The San Diego State defense also suffocated the Pack starters, holding them to just 41 combined points and 15-of-45 shooting. The Pack simply wilted in the environment. The crowd of 12,183 on Tuesday night was nearly equal to the Pack’s previous six road games combined (13,220). The Pack hasn’t won a road game in front of a crowd of more than 2,871 (San Jose State) this year. The hope is that the Pack learned a valuable lesson on Tuesday about matching the intensity from the crowd and the opponent on the road. If not, well, road games the rest of the year at Boise State, UNLV, New Mexico, Utah State, Fresno State and Wyoming will be difficult.