Former Tahoe Biltmore on track to become a Waldorf Astoria 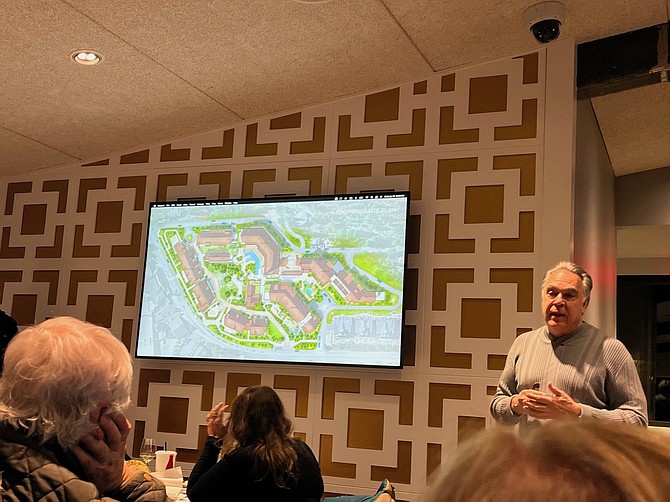 EKN Founder Ebbie Nakhjavani gave an update on the project at the former Tahoe Biltmore in Crystal Bay.

By Kayla Anderson Special to the Nevada Appeal

On Thursday, EKN Development gave the Incline Village/Crystal Bay community an update on what is happening with the former Tahoe Biltmore in Crystal Bay. The hotel casino was in operation for 76 years and fell into disarray before EKN Development came in and bought the property in 2021.

In 2011, the previous owners received permission from the Tahoe Regional Planning Agency to build a mix of condos, timeshares, and hotel units in what was called the Boulder Bay Community Enhancement Project in a phased plan. It broke ground on its first phase of condos in 2015 (located next to the hotel) and the 18 units were sold a couple of years later. Then in the fall of 2021, EKN purchased the property. It did not have a gaming license and therefore kept the existing gaming partner to keep the casino open through April 2022. The Biltmore closed on April 30, and gained possession of the property on May 1. EKN spent last summer doing some sitework with the goal of converting the site into a more upscale, sustainable, tourist and community-oriented destination.

Since EKN purchased the property, its team has committed to be completely transparent with its plans. It hosted a public meeting in early October 2022 to share its intentions with the community, which still included a hotel, community park, retail stores, a casino, dining space, and pedestrian/transit improvement. At that time, EKN Founder Ebbie Nakhjavani filed a plan revision with the TRPA to reduce the number of hotel and condo units (a 47 percent density reduction), increase the size of the community park/public plaza, and update the drainage plan to reflect current technology that allows better water treatment and storage. The revised version reflects a 90 percent sediment reduction runoff (up to 30 pounds per year); a 38 percent reduction in energy and water use; and its toned down number of units resulting in nearly 10,000 vehicle miles traveled within the basin compared to the current 33,000 VMT related to the existing site. It also reduced its total land cover development by 1.6 acres to allow for snow percolation/buildup in the winter.

The community meeting last October was met with an overwhelming favorable response with Incline Village/Crystal Bay residents, key organizations, and business owners in support of the project.

In early December, EKN announced that it is partnering with Hilton to build a Waldorf Astoria while keeping the other components of the revised plan intact. On Jan. 11, EKN held another community meeting at the newly renovated Bowl Incline in Incline Village to personally share its updates. Around 50-70 people were in attendance, EKN gave two presentations, and Nakhjavani fielded questions regarding the plan. Nakhjavani reiterated that its aim is to change the original Boulder Bay project from an exclusive, closed-door resort to a welcoming community-oriented place.

“We want to make it feel like people have arrived somewhere, not just taking some highway into an old town. And we know that if you create a project that’s embraced by the community then it thrives, it survives.”

However, one of the biggest concerns was regarding how EKN would support its employees in an area where there is a massive shortage of workforce housing.

“We have multiple initiatives out there and can’t disclose acquisitions at this time but what I can say is that what we have going is not enough,” Nakhjavani admits.

He says that currently the Revitalize Biltmore plan includes 28 onsite beds for workforce housing and 10 offsite ones; and that their aim is for this to be a career-building opportunity instead of just injecting the area with seasonal hires.

“We are forming a coalition and have met with various property owners to try to come up with a solution. The employees who work here will be a part of the community, to experience it and be involved.”

Attendees also brought up concerns about parking, and Nakhjavani said that they are looking at building an underground parking garage to prevent snow runoff. There will be paid, self-parking options that can be validated at one of the property’s various venues. EKN is also trying to help establish a bike path from Incline Village to Crystal Bay and will also have a bike valet and onsite electric vehicle charging stations.

EKN also purchased eight lakefront cabins in Tahoe Vista on the California side to allow beach access for its guests (much like a Ritz-Carlton, Clear Creek Tahoe, or Martis Camp clubhouse) and signed a 30-year lease with Vail Resorts to have a location at the Village at Northstar (where the White Rabbit is). Revitalize Biltmore Next Steps:

Nakhjavani answered all questions, and attendees shared positive feedback. The owner of The Sanctuary next to the Biltmore thanked Nakhjavani and his team for their transparency, communication, and being a good neighbor.

“The fact that you show up says a lot about your commitment to this place,” says another attendee.

A resident of Stillwater Cove in Crystal Bay added, “Thank you for your solid evacuation plan and adding value to the Crystal Bay/Incline Village community.”

Nakhjavani did share with the audience its most pertinent challenges that could staunch progress, though.

“We are committed to this project; we’re not just going to start something and go away. However, when I started this project, it was going to cost $364 million but now it will be around $750 million,” he says. Nakhjavani further explains that with rising project costs and changing interest rates, time is of the essence.

“If this delays then it jeopardizes the project,” Nakhjavani adds.

Nakhjavani does admit that although the project is already approved by the TRPA, a handful of naysayers are bombarding the Planning Agency on a daily basis with misinformation about the project. The TRPA is hosting a hearing on Jan. 25 at its office on Stateline and over Zoom regarding the vision for Revitalize Biltmore, and he encourages people to attend and speak up if they support the project.

“Most of the TRPA board are members from California and we need to show support for Nevada [but] our team has worked very closely with TRPA staff to make sure we meet all of the requirements,” Nakhjavani adds.

A few people asked if EKN knew anything about what was going on with the long-shuttered CalNeva property across the street from the Tahoe Biltmore, and while it is private property, Nakhjavani admitted that EKN proposed to buy CalNeva several years ago off-market but there were too many moving parts and people involved.

“I believe that Larry Ellison still owns the CalNeva and has it for sale,” Nakhjavani says. “Whoever comes in is going to have their hands full; for now, we’re standing on the sidelines. We agree that the CalNeva and Tahoe Inn all need to be revitalized.”

The Hyatt Regency Lake Tahoe in Incline Village told its employees in fall it would be launching the first part of its two-part renovation this spring but then announced in mid-January that they would be putting it off until spring of 2024. The lakeside renovation includes tearing down its lakefront cottages and gutting Lone Eagle Grille with plans to turn it into a Nobu.

According to its website, “Enhancement work is expected to start late April 2024, and anticipated through April 2025. During this time, these accommodations, amenities and access to Lake Tahoe, the beach and the pier will not be available, along with all related lake activities.”