Santoro: For 14-4 Wolf Pack, the road gets much bumpier 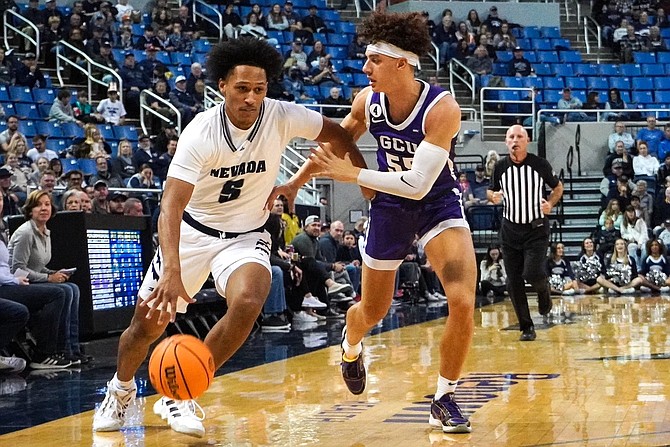 Freshman Darrion Williams has provided a big spark for the Wolf Pack, who went 14-4 over their first 18 games.

Get ready for a bumpy ride, Nevada Wolf Pack basketball fans. Strap on your seat belt, check your oil and the air in your tires, turn off your cell phone, lock your doors, clean your windshield and make sure your insurance is paid in full. And never, ever, under any circumstance, take your eyes off the road or pick up a stranger. The rest of this Wolf Pack season is going to be filled with thrilling twists and turns, hairpin corners, some steep drops and hold-your-breath moments. It won’t be for the faint of heart. Yes, the Pack is 14-4 overall right now and 4-1 in the Mountain West. But if you expect the final 13 regular season games to be as smooth, easy and stress-free, well, it might be time for you to jump off the bandwagon right now. This isn’t the Nick Fazekas-Ramon Sessions-Kevinn Pinkney-Marcellus Kemp Wolf Pack. It isn’t the Cody and Caleb Martin-Jordan Caroline-Jazz Johnson-Lindsey Drew Wolf Pack. It’s not even the Cam Oliver-Marqueze Coleman-Tyron Criswell-Marcus Marshall Wolf Pack or the Deonte Burton-Malik Story-Olek Czyz-Dario Hunt Wolf Pack. It’s the nobody-believed-in-us, we’re-better-than-you-think, we’ll-outwork-you and never-say-die Wolf Pack. And now it is going to get serious.

The remainder of the Pack’s regular season would frighten even the other storied Pack teams mentioned above. Road games at Boise State, UNLV, New Mexico, Utah State, Fresno State and Wyoming. That will be like strolling through somebody’s makeshift haunted house in a creepy garage at Halloween, only the monsters won’t just try to scare you. They will try to make you bleed. There will also be home games against Utah State (this Friday night), New Mexico, San Diego State, Air Force, Fresno State, San Jose State and UNLV. That, too, will be full of fright. A 7-6 record over the final 13 would be totally acceptable. Any better and, well, you should make your plans to go watch this team in the NCAA Tournament.

This Wolf Pack team’s success, despite what happened at San Diego State on Tuesday (a 74-65 loss that felt like 94-65), has come out of the silver and blue. Nobody had a right to expect a 14-4 start, not coming off an underachieving 13-18 team that lost its top three players (Grant Sherfield, Dez Cambridge, Warren Washington) to the evil transfer portal. As things stand now, this is one of the most overachieving teams in Wolf Pack history. Credit coach Steve Alford and his staff and a bunch of hard-working, unselfish, team-first players that don’t know they should not be 14-4 right now. Veteran returning players Kenan Blackshear, Tre Coleman and Will Baker have been the foundation and have taken the lead. They could have run screaming into the night when Sherfield, Cambridge and Washington left, but they stayed. Newcomer Jarod Lucas from Oregon State has been a gift from the Pac-12. But the real key to all of the success so far has been the emergence of freshmen Darrion Williams and Nick Davidson, who have combined for 15.8 points, 11.5 rebounds, 3.3 assists, 2.2 steals and 47 never-not-working minutes a game.

The last Wolf Pack team to overachieve as much as this one was the 2011-12 team that finished 28-7, won the Western Athletic Conference regular season and a National Invitation Tournament game. That team, like this year’s team, was coming off a horrible (13-19) season in 2010-11. The difference between 2011-12 and this year was that the Pack of 11 years ago was expected to show considerable improvement. Nobody expected 28 wins but the players that struggled through 2010-11 all came back the following year more experienced, battle-tested and motivated. That 2011-12 team, after all, had Deonte Burton, Malik Story, Olek Czyz, Dario Hunt and Jerry Evans, who each started all 35 games. There was also an extremely deep bench that had Kevin Panzer, Jordan Burris, Devonte Elliott, Patrick Nyeko, Jordan Finn, Brice Crook and Keith Fuetsch. This year’s Pack team doesn’t have half the talent of the 2011-12 team. But it has the same heart, work ethic, determination and belief in itself.

This Wolf Pack team, unfortunately, is extremely fragile. Blackshear, the fourth or fifth option on offense last year, was thrust into the point guard and leadership role when Sherfield jumped ship to Oklahoma and recruit Hunter McIntosh got injured before the season. Williams and Davidson have been a revelation, but they are freshman. They can either continue to improve or hit the freshman wall. Will Baker is a talented scorer, Tre Coleman is a talented defender and Jarod Lucas is a talented shooter but they are all lacking in other areas. Davidson is the only one off the bench who gives a consistent performance game after game. The 14-4 start has been a much-needed breath of fresh air, not only for the basketball program but for the entire campus after a horrendous football season that ended with a 10-game losing streak. The question now is whether or not that success can be sustained or was just a mirage in the Wolf Pack desert.

College football has a clear competition problem and nobody seems to care all that much about it. Georgia’s 65-7 victory over TCU in the national title game should be an embarrassment for all of college football. It wasn’t so much a matchup of the two best teams as it was a repeat of Secretariat in the 1973 Belmont. It was difficult to watch, like taking a boat cruise with your family off the coast of Alaska and watching a whale devour baby seals for lunch. But, as college football proves year after year, there are people who apparently enjoy watching whales eat baby seals as long as that whale is wearing a shirt with their school’s logo on it. Why does anybody pay attention to college football? Is it just for the beer and hot dogs in the parking lot or a chance to punch someone in the face that dares to wear an Auburn or Alabama sweatshirt? It’s certainly not for the competition. The top three or four teams in the SEC fight for the national championship every year and everybody else battles for some ridiculous spot in a who-cares bowl game. College football at the end of the day is merely a giant television ad sold to the beer-swilling, my-school-is-better-than-your-school public by the college football-fawning media. The sport, after all, is over a hundred years old and it still hasn’t found a legitimate way to come up with a true champion. That’s because it is professional wrestling with shoulder pads.

Georgia’s baby seal slaughter should make everyone take notice. But all we get from the media are reports of Georgia’s greatness and how little old TCU should be proud for its season. Nobody seems to care that big-time college football is merely a scripted reality show with less drama than two Kardashian sisters fighting over an NBA power forward. But the Kardashian sisters all over college football are getting rich, even down to the coach of a two-win Nevada Wolf Pack. So don’t expect any real changes anytime soon.

NFL playoff predictions: All the home teams, plus Dallas, will win this weekend.

The Los Angeles Chargers with Justin Herbert could go to Jacksonville and beat Trevor Lawrence. Jacksonville, after all, has a very distinct TCU feel to it. But the Chargers are the Chargers, not the Georgia Bulldogs. Unless Baltimore has Johnny Unitas at quarterback it won’t beat Joe Burrow and Cincinnati. Miami might try to beat Josh Allen and Buffalo by sticking three running backs in the backfield and running the wildcat all game long. That would work in the SEC, but not the NFL. The New York Giants-Minnesota Vikings game will likely have less meaning by next week than this year’s Quick Lane Bowl so don’t get too worked up over what happens in Minnesota. Did we really need a third Seattle-San Francisco game this year? One Brock Purdy-Geno Smith matchup, after all, is more than enough.

The most intriguing game will be Monday night with Dak Prescott and Dallas taking on Tom Brady and Tampa Bay. But the Bucs and their 8-9 record is sort of like a 5-7 San Jose State Spartans getting in a 2015 bowl game. This game has a bad Hollywood movie “Grudge Match” feel to it with an aging Sylvester Stallone and Robert De Niro climbing into the ring.