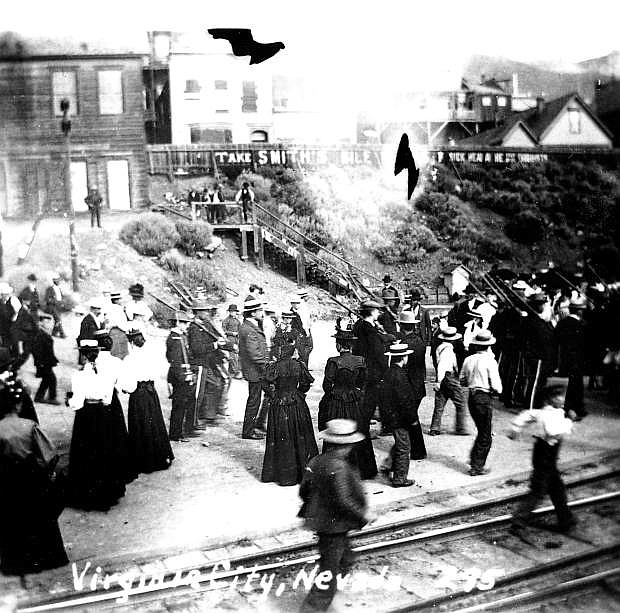 Collections: Pretty little Misses Mary Wilson and Della Waters were taking up subscriptions for a school organ. They seemed to be getting in money pretty fast. We wish them and the committee a large success in getting the school the great big sweet, toned organ.

In brief: Scarlet fever is spreading very rapidly in our midst. Parents cannot be too careful in guarding their little ones against it. School trustee Webb will have the public-school rooms disinfected during the prevalence of scarlet fever.

Married: Rev. J.W. Hyslop of St. Peter’s Episcopal Church officiated at the wedding of A. Lowndes Scott and Miss Bird Lavinia Rickey. A large crowd of invited guests witnessed the ceremony at the Church, and there was a reception of the residence of the bride after with ceremony. Eight bride’s maids stood up with the bride.

New smallpox vaccination: Under the new usage there is a change. The kids visit the doctor who has his vaccination all wrapped up in a near-looking double-ended phial. The doctor cleanses the patient’s arm, make a lot of geometric scratches, and then fixes up the patient. When it is finished there is a neat little glass house, and observation tower or show case, fastened over the wound.

A boy who missed one of the show cases is so disgusted that he hopes his case won’t take. The fun of showing the protected hot bed under the glass is irresistible.

Photo caption: Most of the 2,700 iron lungs available during last year’s record epidemic did double and ripple duty as they served some 7,000 polio patients afflicted with breathing difficulties. The March of Dimes which paid for getting 2,175 iron lungs to those who needed them in 1952 – is spending equally large amounts on studies aimed at freeing more patients from the confinement of these self-same lungs.

Major Downie: The old pioneer and founder of Downieville, Major Downie, came to Carson. He brought with him a magnificent painting known as “Madonna in the Chair.” It represents a happy family consisting of the beautiful mother and two beautiful children. It is on its way to the men of the Capitol. This is to be presented to the children of our Orphans’ Home and can be seen in the Controller’s office.

Sickness: The Appeal learns that scarlet fever and diphtheria are here now as a number of new cases have been reported. Temporary closing of the public schools might have a good impact on checking the spread of the diseases.

All sorts: The saloon in the basement of the California State Capitol, known as “The Well,” has been abolished. Whiskey sold there would make a thief out of an honest man.

To the public: Kingsbury Billiard Parlors was a nest of smallpox infections. I wish to state that it was fumigated, and that the place is pure, all billiard cues, balls, and table. Harold Vaughn, proprietor.

Divorce in Nevada: In 1952 Nevada’s divorce business fell, but marriages continued at a brisk pace. Divorces numbered 9,394, and marriages numbered 60,000.

A large lodging house is being built in the rear of Campbell Blacksmith’s Shop. The house will contain twenty or more outside sleeping apartments. It will be a great convenience especially to the railway boys because it is in the same neighborhood.

Box factory: The new box factory of D.L. Bliss & Company in the southern part of the city will soon be in operation. It will employ thirty-five men and boys.

All sorts: Bob Fulton, the ex-editor of the Gazette, has been visiting the city with a scheme to move the Capitol to Wells.

Trying the snow: A few sleighs ventured off this afternoon to try the snow. Nearly a foot of snow is on the ground, and the sleighing should be splendid.

The Junior Leisure Hour Club met in the club rooms for a regular business meeting presided over by Mrs. Gene Lencioni, president. Guest at the meeting representing the senior group was Mrs. Lucy Crowell who did a presentation on the “History of the Leisure Hour Club.”

George Burns turns 97: He refused to sign a five-year contract with Caesars in 1990, saying he was unsure if the strip mall would still be around. He is still planning on playing in London in three years.