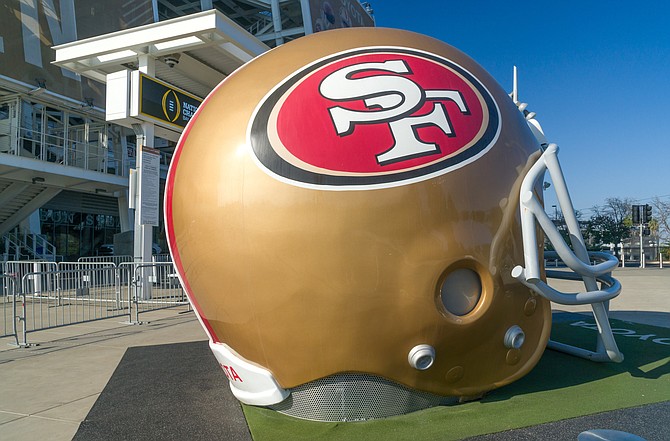 An oversized San Francisco 49ers helmet is pictured outside of Levi’s Stadium, the site of Sunday’s 49ers-Cowboys NFL playoff game.

Are we closing in on the inevitable Bye Bye Purdy moment for the San Francisco 49ers? This NFL fairytale can’t continue, right? Brock Purdy, of course, simply is not supposed to lead a team to the Super Bowl, let alone win it. What is the difference, after all, between Brock Purdy and all the other no-name, little-talent quarterbacks the 49ers have paraded in front of us for so many decades? You remember them. Of course you do. The pain, after all, still lingers to this day.

Mike Moroski, Steve Bono, Jeff Kemp, Blaine Gabbert, Ken Dorsey, Matt Cavanaugh, Nick Mullens, C.J. Beathard, Shaun Hill, J.T. O’Sullivan, Tim Rattay. The list goes on and on. Tom Owen, Scott Bull, George Mira, Steve Spurrier, Elvis Grbac, Steve Stenstrom. The 49ers quarterback parade since the 1940s, after all, hasn’t all been one John Brodie, Y.A. Tittle, Frankie Albert, Joe Montana, Steve Young and Colin Kaepernick highlight after another. Purdy, though, has gone where the Mike Moroskis, Steve Bonos, Tom Owens, Jeff Garcias and Shaun Hills failed to go. He is two wins away from the Super Bowl. He’s won all six of his starts. All he does is throw touchdown passes (16 in his last seven games) and win. He has basically gone from C.J. Beathard to Joe Montana in a month. There’s never been a 49er fairy tale like it.

Carson Strong, we’re here to remind you, also might have become Brock Purdy. The 49ers held the final pick of the 2022 draft last April and both Purdy and Strong sat staring at their cell phones waiting for the call. Neither quarterback had been drafted so far and were now facing a NFL life as Mr. Irrelevant (the last pick in the draft) or as a free agent. Neither fate was all that promising. The 49ers, we know now, picked Perfect Purdy, a 6-foot-1 quarterback out of Iowa State and sent Strong (among others), the 6-4 quarterback with the bad knees out of Nevada, to free agency. What if Strong had been picked by the 49ers? What if he was on the roster when both Trey Lance and Jimmy Garoppolo got hurt? What if Strong was thrust into the starting lineup with all of the fancy toys (Deebo Samuel, Christian McCaffrey, Brandon Aiyuk, George Kittle, the Kyle Shanahan offense) that Purdy now has at his disposal? Would the 49ers now be preparing to face the Dallas Cowboys on Sunday in the NFC semifinals if they called Strong and not Purdy? Strong, don’t forget, was touted as a first-round pick just months before the draft while Purdy was always considered, at best, a late-round pick likely headed to a practice squad. Purdy is now two wins away from a Super Bowl while Strong already has suffered two strikes (releases by the Philadelphia Eagles and Arizona Cardinals) in his NFL career.

Purdy, who wears No. 13 because of Dan Marino and not because of former 49ers such as Shaun Hill, Steve Bono or Frankie Albert, became the first 49ers rookie quarterback to start and win a playoff game last week when he beat the Seattle Seahawks. He is the first Mr. Irrelevant quarterback to ever throw a pass in the NFL, let alone win a playoff game. No rookie quarterback in NFL history has ever won a Super Bowl. So, yes, that Bye Bye Purdy moment, history tells us, will come sometime in the next three games. But there is always a first time for everything in the NFL. There have been Super Bowl-winning quarterbacks that have been drafted lower than Purdy (seventh round). Green Bay’s Bart Starr was picked in the 17th round in 1956, Roger Staubach was picked by Dallas in the 10th round in 1964 and Baltimore’s Johnny Unitas (1955) and Tampa Bay’s Brad Johnson (1992) were each picked in the ninth round. St. Louis’ Kurt Warner wasn’t even drafted at all in 1994.

Purdy and the 49ers can certainly beat Dallas this week and either the New York Giants or the Eagles next week and get to the Super Bowl. As long as Purdy doesn’t turn into J.T. O’Sullivan right before our eyes, the 49ers will likely be in Glendale, Ariz., on Feb. 12 for Super Bowl LVII. Purdy, by the way, played his high school football in Gilbert, Ariz., for Perry High where he was the state’s Gatorade Player of the Year in 2017. You can’t make this stuff up, folks. Snow White is more believable than this Purdy fairy tale.

The national NFL media has barely paid attention to what Purdy has done this year. They mention it for a second or two and then start talking about the future of Tom Brady and Aaron Rogers. There’s a lot of reasons for the Purdy snub. Purdy is easy to overlook, he’s about the 20th-best player on his own team and he only appeared on the national radar a month ago. The NFL media, after all, didn’t know anything more about Brock Purdy than it did about Dieter Brock a month ago. But the biggest reasons the NFL media isn’t filling up its countless podcasts with Purdy discussion is that the 49ers are tucked away on the West Coast (and not in Los Angeles) and Purdy isn’t Brady or Rogers, doesn’t play for the Dallas Cowboys, or isn’t being discussed in a package deal with Sean Payton to help turn around a franchise.

Even if Purdy wins the Super Bowl the national media will start to focus on the future of Brady and Rogers the very next day. There might even be ridiculous talk of Brady and Rogers, both Northern California natives, replacing a Super Bowl-winning Purdy in San Francisco. Nobody believes in fairy tales anymore.

Winning the Mountain West will be quite an accomplishment for the Nevada Wolf Pack men’s basketball team. Steve Alford will get a nice bonus, they’ll be able to hang a pretty banner in the Lawlor Events Center rafters and it will make the folks in Boise and Las Vegas very angry and jealous. Those are all good things. But the most important thing about any college basketball season, of course, is getting to the NCAA Tournament. And the Pack might not have to win the Mountain West regular season or postseason tournament to do that. The Pack is currently ranked No. 33 in the nation in the NCAA Evaluation Tool (NET rankings), which puts them solidly in the discussion for one of the 36 at-large bids to the NCAA tournament. The NET highly values wins over good teams away from home. The Pack has already beaten winning teams such as Sam Houston, Tulane, Akron, Pepperdine and Norfolk State away from home. Losses away from Lawlor against Oregon and Kansas State also helped. That’s why road games over the next six weeks at UNLV, New Mexico, Utah State and even lowly Fresno State and Wyoming are extremely important to the Pack’s chances at getting an at-large bid. The 15-4 Pack has 11 games remaining before the conference tournament. Six or seven more wins in the regular season and at least one in the Mountain West tournament should put them in the NCAA Tournament.

The Pack’s biggest challengers for the Mountain West regular season and tournament titles seem to be Boise State, San Diego State, New Mexico and Utah State. Everyone else is a self-destructive mess waiting to implode. The Pack can send a message to New Mexico this Monday at Lawlor Events Center and in Albuquerque on Feb. 7. San Diego State comes to Lawlor on Jan. 31 and the Pack goes to Utah State on Feb 18. So, yes, we’ll have a pretty good idea about this Pack team about 30 days from now. Alford keeps saying rebounding is the key to this team. But Nevada had a 30-27 edge on the boards at Boise State on Tuesday and lost by 15 and they lost the board battle 33-31 to Utah State last Friday at home and won by 15. The key to this Pack team, it seems, is whether or not the shots are falling. We’re talking to you, Kenan Blackshear, Will Baker and Jarod Lucas.