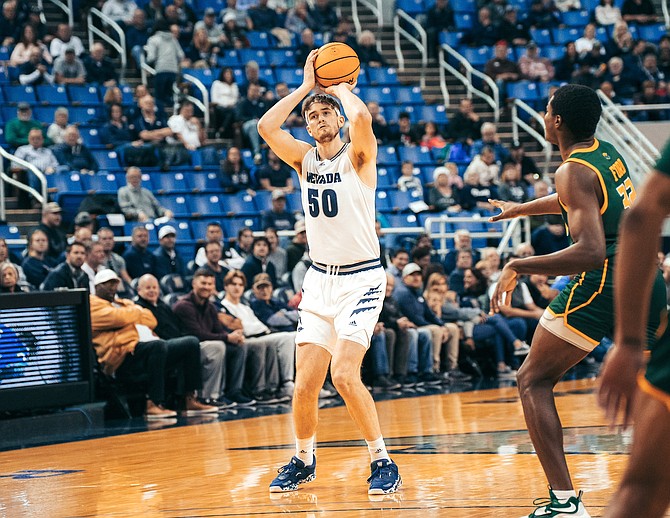 Jarod Lucas played a key role in the Pack victory as much for what he didn’t do as for what he did do. What he didn’t do was pout, feel sorry for himself and lose confidence even though his shot wasn’t falling. Lucas scored 22 points in his 39 minutes despite missing 11-of-16 shots from the floor. His first nine minutes on the floor could have ruined his entire night. He missed all five of his shots and both of his free throws. Lucas’ offense returned with three minutes to go in the first half on a jumper that cut New Mexico’s lead to 36-35. He would score all 22 of his points in his last 30 minutes on 5-of-11 shooting, 3-of-5 on threes and 9-of-10 from the line. Eight of his points came in the two overtimes on five free throws and a 3-pointer. He scored the Pack’s first four points over the first four minutes of the first five-minute overtime, keeping his team in the game. Lucas was taken out of the game on defense twice in the final 72 seconds of regulation, but he never left the floor in the two overtimes.

The Wolf Pack, technically, won this game with Kenan Blackshear on the bench. The Pack point guard fouled out with 4:10 to play in the second overtime with the game tied 89-89. But the Pack likely loses this game in regulation if it wasn’t for Blackshear. Blackshear finished with 20 points in his 40 minutes (18 points in regulation) to go along with four assists, just two turnovers and five steals. Playing with four fouls, Blackshear had a pair of free throws to tie the game at 76-76 with 72 seconds left in regulation and then hit a jumper 35 seconds later for a 78-76 lead. He also could have been the hero, but he missed a layup with two seconds left in regulation. Blackshear then fed Darrion Williams for a 3-pointer to cut the Lobos’ lead to 87-85 with 1:02 left in the first overtime and his jumper with 15 seconds to go sent everyone to a second overtime tied at 87-87. Blackshear’s efficient, comeback performance against New Mexico came less than a week after his most difficult game of the year, when he had 12 points, seven turnovers and just one assist in a 77-62 loss at Boise State.

The biggest player (6-foot-11) on the floor in a Wolf Pack uniform came up big in the biggest game of the year. Baker scored 28 points (25 in regulation), the last three in the final minute of the second overtime from the free-throw line, to show once again that he is the best offensive center in the Mountain West. Baker, who played all 10 minutes in the two overtimes, simply carried the Pack to a 43-38 lead after the first half. He poured in 15 points in 14 first-half minutes on 7-of-8 shooting. He scored 13 of the Pack’s first 19 points and was simply unstoppable in the first half, also dishing out three assists with a rebound and a steal. He then added 10 more points in the second half on 5-of-8 shooting. His only three points in overtime help put the game away (three free throws in the final 51 seconds of the second OT). Baker was an efficient 12-of-17 from the floor in 40 minutes. His minutes (40), points (28), assists (3), field goals (12) and shots attempted (17) are all his career highs (one year at Texas, two at Nevada).

Tre Coleman scored just seven points in 42 minutes, but he was brilliant just the same. The third-year Pack Swiss army knife, in fact, might have been the most important player on the floor for Nevada the entire game. Coleman’s disciplined defense (he played 42 of the available 50 minutes, avoiding serious foul trouble) was instrumental against New Mexico’s Jamal Mashburn, Jaelen House and Morris Udeze. Yes, they combined for 66 points, but it took them a combined 136 minutes to do it. The 6-7 Coleman, though, was much more than a defensive stopper on Monday. His seven points, which all came in the first half, gave the Lobos something to think about the entire game. Coleman, though, also had a career-high nine assists that led to 20 Pack points. Coleman also had four rebounds, two blocks and three steals and affected the game every second he was on the floor.

In case you needed any more proof, you saw on Monday night exactly how important Darrion Williams is to the success of this Wolf Pack team. The freshman played 42 of the available 50 minutes and scored 13 points with 13 rebounds. He played 21 consecutive minutes starting with 12 minutes to go in regulation before fouling out with a minute to play in the second overtime. Williams had career highs for minutes (42), total rebounds (13), offensive rebounds (four), shots attempted (14), 2-pointers made and attempted (4-of-8) and 3-pointers attempted (six). Williams made the crowd cringe when he missed a 3-pointer with 1:41 to go in regulation and the Pack trailing 76-74 because, well, he’s a 29 percent shooter (19-of-65) beyond the arc this year. Why was he firing up a three in that situation? But there he was, draining a huge 3-pointer with 62 seconds to go in the first OT to cut the Lobos’ lead to 87-85. All but one of Williams’ 13 rebounds came in regulation. He stole the ball three times from three different Lobos (Jaelen House, Morris Udeze, Donovan Dent). Williams ended up missing 9-of-14 shots and 5-of-6 threes, so he wasn’t flawless. But when he fouled out with 65 seconds to go in the second overtime and the Pack up just 93-92, you just have to know the Pack was dreading another 5-minute overtime without him. That’s how important Williams is to this Pack team.

The Wolf Pack’s super sub didn’t have much of an impact in this 50-minute game, playing 16 minutes and scoring just two points. But it must be noted the Pack did outscore New Mexico 32-25 when Davidson was on the floor. It was his lowest-scoring output since he failed to score in 21 minutes at Texas-Arlington in the fourth game of the year. Davidson, 1-of-4 from the floor with two rebounds, played just 67 seconds of the final 19 minutes of the game. He played the final 65 seconds of the game in place of Darrion Williams, who fouled out. Davidson’s dunk gave the Pack a 25-23 lead midway through the first half, but his highlight was a block on 7-footer Sebastian Forsling with 13:20 to go in the second half.

Pettigrew played just 11 minutes (none in overtime) and scored four points on 2-of-6 shooting. He did have an offensive rebound and a layup for a 21-18 lead with 11:25 to go in the first half and his layup tied the game at 59-59 with 10 minutes to play in regulation. His four misses were on two threes and two layups. When Pettigrew was on the floor, New Mexico outscored the Pack 23-20.

Foster only scored one point and had three fouls in his 16 minutes but he sure picked the right time to score. Foster missed his first free throw with 14 seconds to go in the second overtime but connected on the second for a 95-94 Pack lead. It was the first time he has made a free throw since the season’s first game on Nov. 7 against Utah Tech. The 6-6 Foster played the final 4:10 of the game in place of Kenan Blackshear, who fouled out. The Pack outscored New Mexico 32-25 when Foster was on the floor in his 16 minutes even though he didn’t take a shot or pull down a rebound.

Powell played just four minutes midway through the first half and picked up a foul. He was never heard from again. The 6-5 transfer from Seton Hall has played a total of 26 minutes over the last five games combined.

Steve Alford somehow found a way to keep Tre Coleman, always his best defensive player, and Will Baker, his best offensive player on Monday, out of foul trouble the entire game. There was no way the Pack would have even stayed in the game if not for 82 combined minutes of production by Coleman and Baker. Alford wisely took Coleman off the floor just three-plus minutes into the game with just one foul. Coleman sat for five full minutes and returned to play 38 of the final 41 minutes, picking up just two more fouls. Baker wasn’t called for a foul at all until the final minute of the first overtime. Alford somehow won this 50-minute game without getting much production out of his bench. Four reserves played a combined total of 47 minutes and scored just seven points with four rebounds. Alford also convinced Coleman to be the playmaker (nine assists) and reminded his team that defense and valuing the ball would win this high-scoring game. The Pack forced Jaelen House and Jamal Mashburn to miss 21-of-37 shots and had 23 points off 19 New Mexico turnovers, while New Mexico had just seven points off just nine Pack turnovers.

It would be easy to credit the victory to Lawlor Events Center, where the Pack is now 10-0 this season. And that, of course, is a huge reason. Stick this game at The Pit in Albuquerque, where an average of 11,000 rowdy fans show up, and the result would likely have been drastically different. We’ll find out Feb. 7 when the Pack visits Alford’s former home. But this is the type of victory that can give a team confidence no matter where it plays the rest of the year. The Pack, without a doubt, had to win on Monday. A loss on Monday and, well, a loss on Feb. 7 would have been a certainty. A victory is now a legitimate possibility. This was as important a victory as Alford has had in his three-plus seasons in Reno.