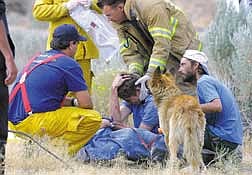 The driver of a pickup truck that rolled several times down the dirt roads behind the Nevada State Railroad Museum off Curry Street reacts to the news that his passenger, who was partially ejected from the truck, was killed.