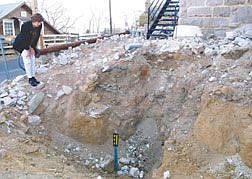 Cathleen AllisonBarbara MacKey, executive director of the Fourth Ward School Museum, shows where a brick arch from the Old Globe Hotel was removed behind the school in Virginia City. Workers were excavating when they found the 150-year-old arch, seen below in detail.