Andrews punishes Buckaroos with 234 yards on the ground 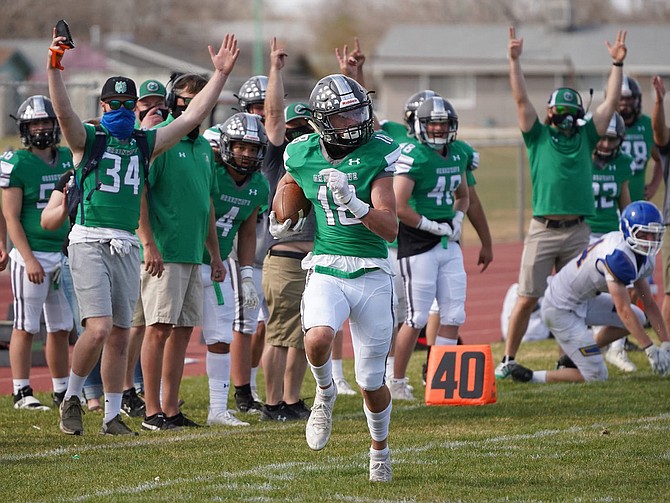 Thomas Ranson / LVN Tyler Austin scooped up a punt at midfield and raced down the Fallon sideline for a touchdown against Lowry. Photo by Thomas Ranson.

Lowry’s first drive of Saturday’s 3A East football game quickly refocused the Greenwave on pass defense, part of its bread-and-butter this season.

Case in point: The Buckaroos (2-3) opened the game by mounting a 10-play drive that covered 65 yards, but on the 11th play, Fallon’s Francisco Tapia picked off a pass in the end zone. Buoyed by the defensive play, the Wave (4-0) rolled with a pair of first-quarter touchdowns to capture a 49-13 win at the Edward Arciniega Athletic Complex. 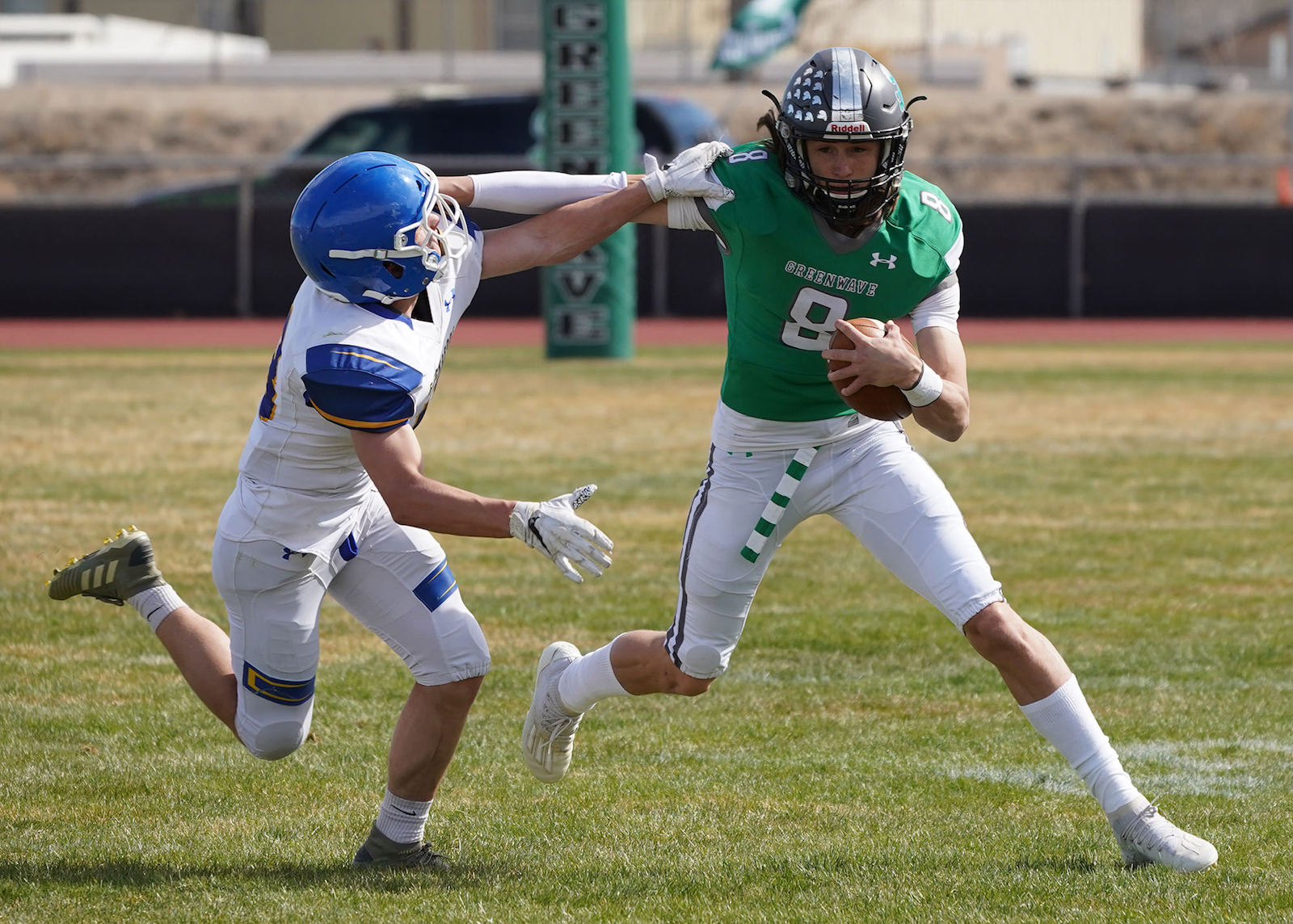 Thomas Ranson / LVN
Fallon quarterback Avery Strasdin (8) straight arms Lowry’s Brennan Colman in Saturday’s football game against the Buckaroos.
Ricci, though, had more success in the passing game against the Greenwave than any other quarterback in the league. He completed 21 of 38 passes for 238 yards. Lowry’s rushing game, though, netted 11 yards.

“We knew they could throw the ball,” Fallon coach Brooke Hill said. “We didn’t expect them to throw to open sets. We made quick adjustments and then did fairly well.”

Hill said the Wave’s offensive and defensive lines dominated Lowry on both sides of the ball. The offensive allowed Fallon to gain 431 total yards, while the defense limited the Buckaroos to 269 yards.

Penalties then moved Fallon back 10 yards on its first possession before the Greenwave flexed their muscles. Levi Andrews took the handoff and aimed toward the near side of the field, but he found a quick opening and sprinted for a 90-yard touchdown with 6:22 left in the quarter. Sam Robertson’s kick for the extra point, though, veered to his right. Robertson booted four extra points in the game to give him 17 in four games.

Fallon quarterback Avery Strasdin said this was the first time Fallon’s pass defense was tested during the season.

Back to Andrews. The Greenwave back gained 239 yards on 14 carries against Lowry. In four games during the abbreviated COVID-19 season, he has ripped opposing defense for 835 yards.
Fallon struck quickly on Lowry’s next series of downs with its defensive strength. The Buckaroos’ Giovani Sapien brought the kickoff to the Lowry 29. On the first down, Ricci rushed for 4 yards and threw an incomplete pass on second down. On third down with karma breathing down his jersey, Ricci threw his second interception of the game that was snagged by Colby Malkovich. The Fallon defensive back ran back 26 yards to the Fallon 42.

Malkovich, though, said the defense makes the difference.

“The defense is great this year,” he said. “The guys stepped up. They’re working hard and doing a great job.”

Not to be outdone by the interception, the Wave offense struck near the end of the first quarter. Strasdin hooked up with Kenji Armbruster for 26 yards with a minute remaining, followed by Strasdin throwing to Matt Davis for a 2-point conversion to give the Wave a two-touchdown lead, 14-0. Fallon’s offense was just warming up. The Wave added a pair of touchdowns in the second quarter and three more in the third.

“Our offense has been able to score regardless the situation,” he added. 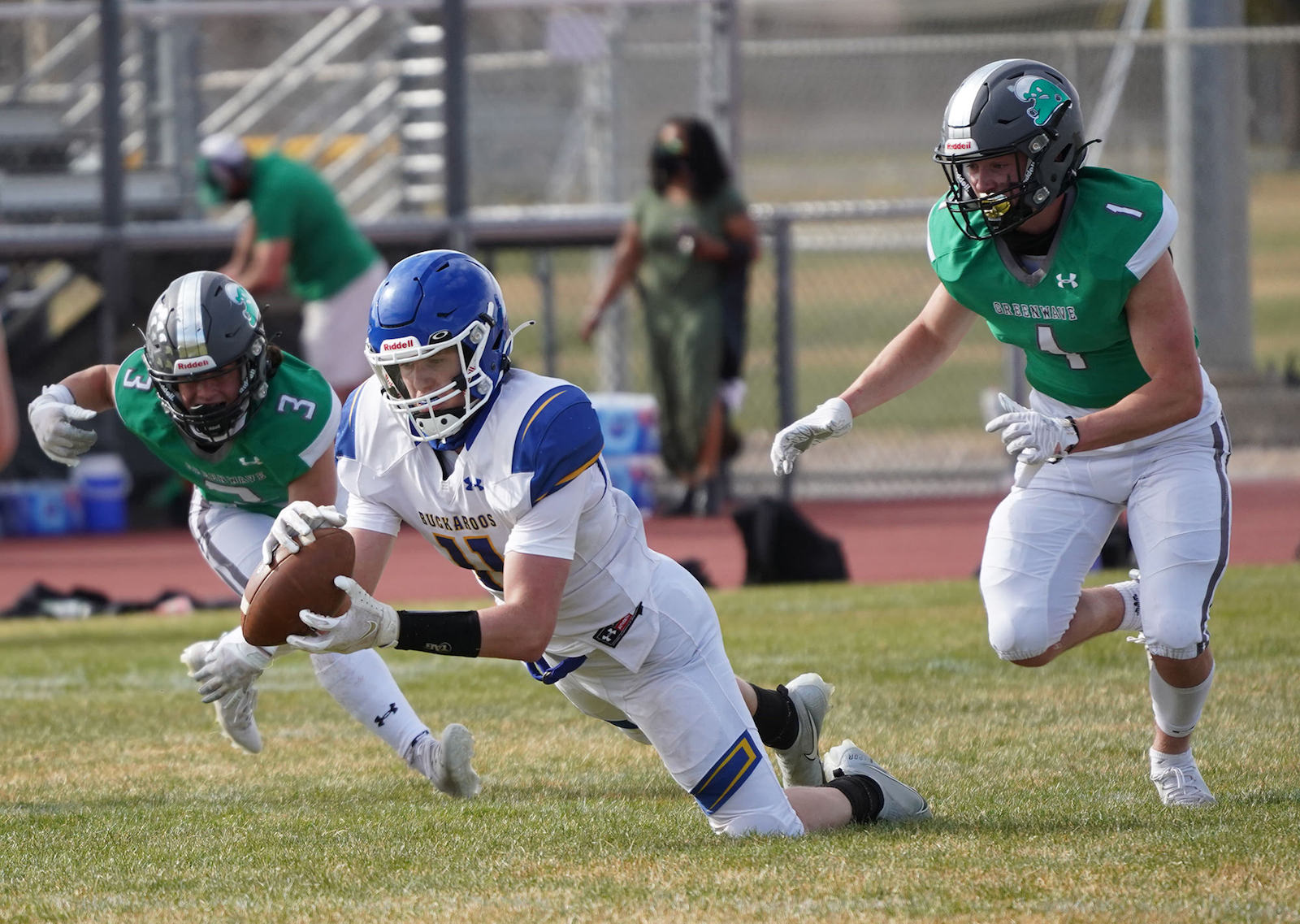 Thomas Ranson / LVN
Lowry’s Logan Fettic (11) dives for a catch as Fallon’s Tristan Hill (3) and Colby Malkovich (1)  zero in on the Buckaroos receiver.
Armbruster, though, had a career day for the Greenwave as he caught three more passes for touchdowns.

“In four games I keep improving,” Armbruster said after the game. “I’m not taking anything for granted. I want to show up and improve.”

Strasdin hit Armbruster with a swing pass in front of the Lowry bench, and the Fallon senior outraced the Buckaroos’ secondary for a 71-yard touchdown at the 8:46 mark, and Robertson’s kick put the Wave on top 21-0.

Lowry responded on its next drive. In six plays, the Buckaroos covered 66 yards capped by a Ricci to Sapien pass for 53 yards. Sapien caught the ball on the 20-yard line, and ran toward the end zone. Hammargren’s kick sliced the Fallon lead to 21-7.

Lowry’s defense rose up in the third quarter to stop Fallon on the Greenwave 1-yard line. Fallon marched down the field, only to stall.

Lowry fizzled on its next six-play drive. On a fourth and 24 from the Lowry 26, Hammargren pulled the ball to midfield, and Tyler Austin watched the ball bounce in front of the Fallon sideline and took the ball on the bounce back 50 yards for the final score of the first half.

Both teams entered into a horse race in the third quarter with Fallon scoring three more times, and Lowry adding its second touchdown.

On their first series in the quarter, the Greenwave put together a five-play 65-yard drive capped by Strasdin’s 23-yard pass to Armbruster. Strasdin, who finished 10-of-14 passes for 163 yards, concentrated eight of his passes to Armbruster, who gained 150 yards.

After bringing the kickoff to the Fallon 40, Ricci completed a 30-yard pass on a second down to Sapien. Hammargren’s kick is no good, and Churchill County leads 35-13.

“We blew our coverage,” Hill. Said.

Within a minute after the kickoff, Fallon moved down the field in six plays backed by a balanced offense. Andrews gained 27 yards and Strasdin completed two passes, a 3-yard pass to Matt Davis and a 10-yard  strike to Austin. On the next play, a first-and 10 from the 23, Armbruster reached for Strasdin’s pass inside the goal line.

“We finally got the route tree going,” Armbruster said. “Avery was putting them (this throws) in a perfect spot to score. It’s nice to see he can throw like that.”

Hill said Lowry’s defense struggled against both the running and passing game.

“They tried to stop Levi which is smart because he’s running for a lot of yards this year,” Hill said. “Kenji had a good game, and Strasdin through the ball well and had a good game.”

On Lowry’s next possession, the Buckaroos punted on the sixth play, which Fallon fielded on its 40-yard line. On first down, Andrews bounced off the right side and took off 60 yards for Fallon’s final touchdown with 3:21 left in the quarter. Joe Mercado kicked the extra point to give Fallon a 36-point lead.

“We needed to get a better push, and they (offensive line) opened it up for me,” Andrews said of his two long runs.

Andrews credited one of the receivers who was able to contain the outside back.

Both coaches substituted liberally in the fourth quarter.

Lowry’s final drive began on its 30-yard line, but the 13-play drive fizzled on the Fallon 13. The Wave ended the game with Malkovich running six conservative plays to run the clock out.
With Saturday being Senior Day, Strasdin had mixed emotions.

“It’s hard, really hard, to leave the field like that,” he said. “For this being one of the last, our seniors had some good energy to put it on Lowry.”

FINAL GAME — Fallon has one game remaining in the shortened COVID-29 season by hosting Spring Creek on Saturday at 1 p.m. All home Greenwave games are streamed live on the NFHS Network or broadcast on radio (KKTU-FM 99.5) or on the Internet at www.network1sports.com/station/kktu.with Larry Barker and Randy Beeghly.
Looking toward the last game, Andrews put the season in perspective.
“It sucks this IS last year with the boys, but we’ll go out with a bang,” he said.