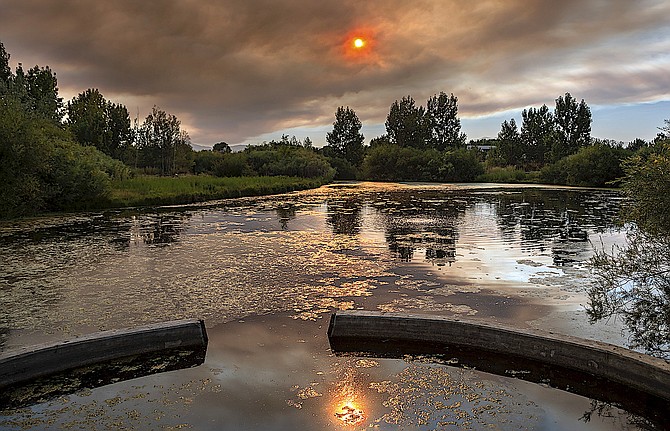 Jake's Wetlands as a smoke plume from the Caldor Fire arrives in Minden and obscures the sun on Tuesday morning.
Jay Aldrich | Special to The R-C

While officially at 6,500 acres, satellite mapping indicates the Caldor Fire has grown to nearly four times that size by lunchtime on Tuesday, according to the Fire Information for Resource Management System.

Ash from the fire was falling in Gardnerville around lunchtime.

The website fire.airnow.gov, shows that the air quality at the Ranchos Aspen Park monitor south of Gardnerville hit unhealthy levels at 153 at noon, up from good in just two hours. The air quality was at hazardous levels near Jacks Valley.

The Caldor Fire was reported 7 p.m. Saturday near Grizzly Flats and is burning in the canyon of the Cosumnes River’s middle fork. 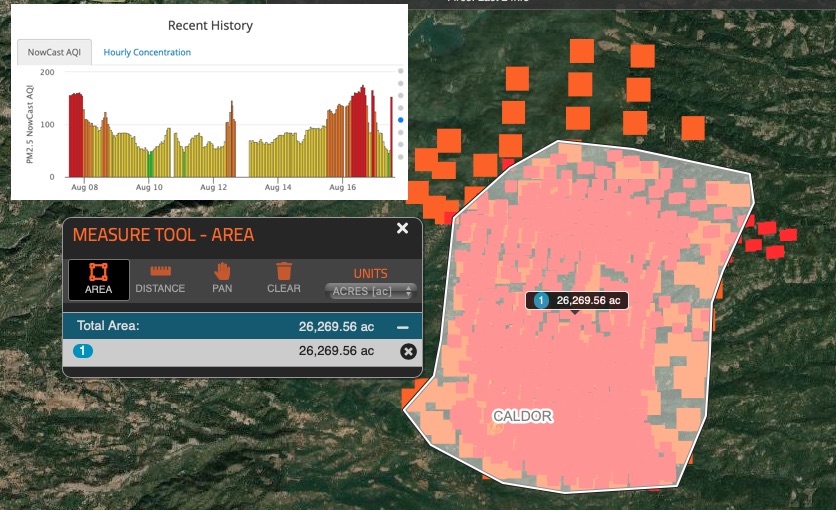 Fire officials ask that residents of the area who do not feel safe, should not wait for an evacuation notice to prepare.

Southwest winds forecast with a red flag warning that were expected to develop at 11 a.m. had yet to arrive in Gardnerville at 1 p.m.

After a few brief gusts of 18-22 mph at Minden-Tahoe Airport, winds dropped down to 6 mph at 1 p.m. as visibility at the airport dropped to under a mile.

A drive-through customer resource center will be open at the Genoa Volunteer Fire Station until 8 p.m. today and again 8 p.m. Aug. 18 or until power is restored. The center is offering devices, light snacks, water, ice and access to Wi-Fi.

A 6,500-acre wildfire burning south of Pollock Pines is sending up a smoke plume that has prompted 911 calls in Gardnerville.

The Caldor Fire has been burning since Saturday night, doubled in size over the last 24 hours and has prompted evacuations near Little Mountain in El Dorado County.

By lunchtime, smoke from that fire and the Dixie Fire burning near Susanville mingled to cast a pall over Carson Valley.

Air quality sensors were showing deteriorating conditions in the Valley as of 11:55 p.m.

The fire is burning along the middle fork of the Cosumnes River. No cause has been reported for the fire, which is burning in steep terrain and has been making aggressive runs.