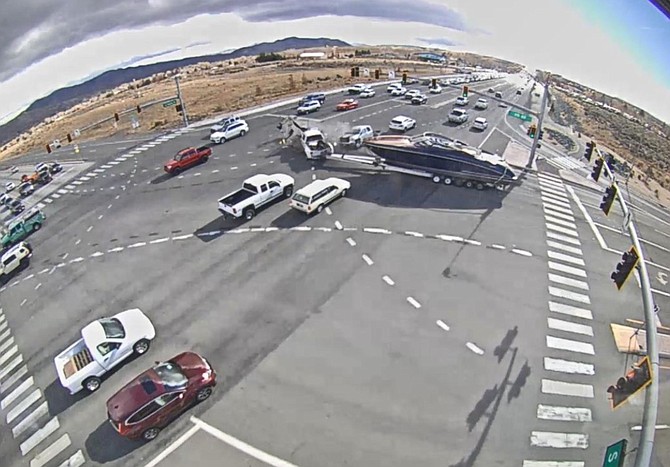 The scene of the crash on Nov. 9, 2021 at the intersection of Interstate 580 and South Carson Street. (Photo: Nevada Highway Patrol)

Traffic camera stills showed a pickup towing a boat plowing through traffic in a horrific fatal Nov. 9 collision that occurred where highways 395 and 50 meet Interstate 580.

New details were released on Tuesday morning regarding the collision that involved eight vehicles including a 44-foot-yacht and an overloaded 2017 Ford F-350 pickup that lost its brakes on the way down the Spooner Highway.

The driver of the pickup, Roney Gonzalez-Otazo, is in custody in Carson City facing multiple felonies in connection with the collision.

According to the Nevada Highway Patrol’s preliminary investigation, the pickup was overloaded by eight tons.

At 12:47 p.m., Gonzalez-Otazo was experiencing extreme brake failure and ran through the red light, striking a silver 2015 GMC pickup containing Dayton residents Don and Tana Powell, who were killed.

The Ford spun around, and the trailer and yacht came unhitched and continued east through the intersection.

A white 2013 Mercedes Benz GL-Class SUV and a silver 2005 Nissan Xterra SUV were traveling north on South Carson Street in the intersection with Highway 50. The Mercedes Benz ran over the trailer tongue and burst into flames.

The yacht trailer continued east and hit the left side of the Nissan Xterra, which rotated clockwise and overturned. Several other vehicles were involved in this crash resulting in minor injuries.

A victim from the Nissan Xterra is still in critical condition at an area hospital.

This crash is being investigated by the Highway Patrol Division’s Northern Command West Multi-Disciplinary Investigation and Reconstruction Team - Case No. 211100660.