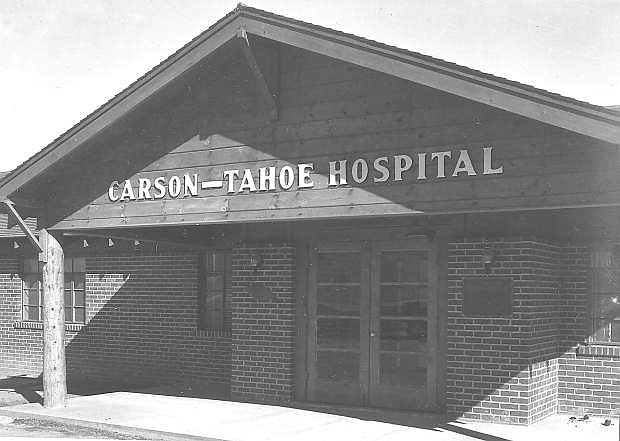 Saturday
150 Years Ago
Twenty-nine prisoners left and marched off in a body, two abreast. They passed due east to the high ridge beyond the prison. Seven others took a different direction. C. H. Belknap, Private Secretary to Governor Bradley, telegraphed to General Batterman at Virginia (City) to call out the organized militia. (continued next week)
130 Years Ago
Carson’s Day: Nearly all the stores in Carson will be closed, and the merchants will go to Reno and take in the State Fair. Crowds from Virginia City will be at the grounds, and the merchants of Reno will shut up shop and greet their Virginia and Carson friends. El Rio Rey, Theodore Winter’s celebrated horse, will appear on the track and gallop a mile.
120 Years Ago
Lewis-Mighels: Miss Bessie Mighels of this city was married to Irwin Lewis of Los Angeles at the residence of Mrs. H. G. Shaw in San Francisco. The house was decorated with ferns and flowers, and there was a numerous array of wedding gifts. A collation [sic] was served after the ceremony, and the happy couple took the train to Los Angeles. (Bessie Mighels is the daughter of Nellie and H. R. Mighels, Morning Appeal, Carson City.)
100 Years Ago
Prohibition: May shut up saloons — A movement is on foot by the federal authorities to close the Bank and Tuscana saloons. The Tuscana, or Andrioni place, has had a succession of raids and in each, one of the proprietors has been nabbed. In Reno it has been necessary to place a federal padlock on repeaters—this will follow in Carson.
70 Years Ago
Photo caption: Heat lightning — That’s the name of Carson Community Players’ play number two in a series of four to be presented in the civic auditorium. The cast is composed of three — Teddy Miller, Mrs. Mylie Carter and Gene Mills. Director of the play is Stella N. Thomas who is making her first attempt as Director. Assisting is Dick Sobotto, diction and drama teacher at Carson high school. Mary Watson is in charge of properties. (Photo by Nulty.)
20 Years Ago
Flights limited: Check-out lines at the Carson Tahoe Airport were trying to get back to full schedules. Check-in counters had long lines, and many passengers were stranded when the FAA shut down the nation’s airspace following the World Trade Center attacks.
Sunday
150 Years Ago
Prison escape: After the prison escape, some of the convicts were prowling about. Mrs. Dorsey was alarmed at hearing the footsteps of a man on her porch. Her dog fought the intruder off. Her husband was absent and no one but ladies have been stopping at her house. It is an isolated incident but just the place burglars would go.
Mrs. Whitford went into the yard for some articles of clothing, saw two men and ran for her house. A piece of firewood was thrown through her window pane and struck her on the head.
Mrs. E. B. Pixley had been exhibiting her bridal presents, among them silverware. The burglars could see them from the outside, and their intention was to take them. The ladies screamed and their neighbors, James Cheney and his brother went to assist them. James stayed during the night. The burglars are aware of the absence of J. C. Dorsey from the home. (continued)
130 Years Ago
Wells Drury: When Wells’ eyebrows are draw down toward the bridge of his nose and his in-curling mustache switches, he is not pleased. But when the two dimples in is cheeks appear, and he tosses his hat back on a thick growth of hair, something tickles him. Wells Drury looked this way all day yesterday.
120 Years Ago
The horse races: The third day of the Carson races proved satisfactory — good weather and crowds fair sized. The first race was a quarter-mile dash with the following entries: Sinfax, Corn Cake, Mattie Clark and Pilot. The race was a good one with Corn Cake the victor.
100 Years Ago
Today’s biggest kind of job to tackle: Henry Ford announced himself as ready to start a nation-wide drive to cleanse politics. He said he was issuing this statement to emphasize the message he sent to the senate demanding it “clean its own skirts.”
70 Years Ago
Photo caption: The sky rained lead – Gilman Freeman Fairfield exhibits some of the 50-caliber machine gun bullets sprayed in and around his Long Beach, Calif., home by a malfunctioning gun on an Air Force F-51 fighter plane six-miles away. The fighter was in preflight when the gun cut loose, spraying rounds into a large area of Long Beach, Calif. No injuries were reported. (NEA Telephone)
20 Years Ago
The 81st Candy Dance: In 1919 Genoa needed money to purchase and install lights. The idea was to host a dance and pass out homemade candy as a fundraiser. Lillian Virgin Finnegan and her aunt Jane Raycraft Campbell began the event that ended with a midnight supper. Now the 81st Candy Dance is still being held with crafters, vendors, and history-lovers and is Genoa’s largest annual event.

Tuesday
150 Years Ago
Prison escape: Lt. Gov. and Warden Denver is doing remarkably well, and he is healing in a short amount of time. Mr. Isaacs is in a very low condition; his main attendant informs us the wounds are doing well, and the vital power in the patient is what is needed for a cure.
Reward! For recapture and delivery to the Warden of the State Prison at Carson City of the following named convicts:
$300 for each of the following: William Russell, Charles Jones, Tom Heffron, Tilton P. Cocerell, John Squires, Thomas Ryan, Thos. Flynn, David Lynch, Leander Morton, Geo. Roth.
$200 for each of the following: Wm. Forrest, Frank Clifford, J. B. Roberts, Elijah Ingram, Pat McCue (alias Peeping Tom), E. B. Parson, J. G. Watson, Wm. Willie, J. E. Chapman, Edward Bigelow, Tim McNamara, Dan B. Baker, John L. Jacks, Moses Black, John Burke, Pat Hurley, Chris C. Blair, Marion Pruitt.
130 Years Ago
Married, Charles Wylie to Miss Arletta B. Day: The young couple have been raised in Carson. The bride is an exceedingly beautiful girl. Mr. Wylie is a gentleman who never allows a “Day” to go by, and his friends congratulate him on his choice. The couple left for a California tour and will return to Carson which will be their home.
120 Years Ago
Wheelmen relay: The Carson Wheelmen and the Oak Park team of Sacramento will race 50 miles, each man riding five, with 10 on a side. The Carson boys have been training faithfully for a month and feel confident they can defeat the Oak Park team from Sacramento. Should the Carson boys win they intend to perfect the team and go after the big teams of the Coast.
100 Years Ago
Pioneer Days: Ab Ambrose and Horace D. Ashton, the motion picture artist who took the pictures of the Pioneer Day parade, have been busy on working on historic scenes. Mounted on a flat car, pictures were taken of all the interesting points between Carson, Virginia City and Gold Canyon. A day was spent at Virginia City where views and motion pictures secured, and the new work at American City filmed. The most interesting series of pictures were taken at old Fort Churchill, and the section where the Indian fight in which Major Ormsby and his soldiers were killed. Carson is to be given a chance to see the film in its entirety when completed.
70 Years Ago
Photo caption: “Heat Lightning — That’s the name of Carson Community Players’ play number two in a series of four to be presented this coming Friday and Saturday nights in the civic auditorium. Written by Robert F. Carrol, the cast is composed of three, Teddy Miller, Mrs. Mylie Carter and Gene Mills. Director of the play is Stella N. Thomas, who is making her first attempt at that sort of thing. Assisting her is Dick Sobotto, diction and drama teacher at Carson high school, and Mrs. Mary Watson is in charge of properties. (Photo by Nulty.)
20 Years Ago
Advertisement: “Ironwood Stadium, Cinema 8, Minden, Nevada, 1760 US Highway 395 — ‘Zoolander’ with Ben Stiller and Owen Wilson; ‘Glitter’ with Mariah Carey and Max Carey; and ‘The Musketeer’ with Catherine Denuve, Tim Roth and Mena Suvari.”