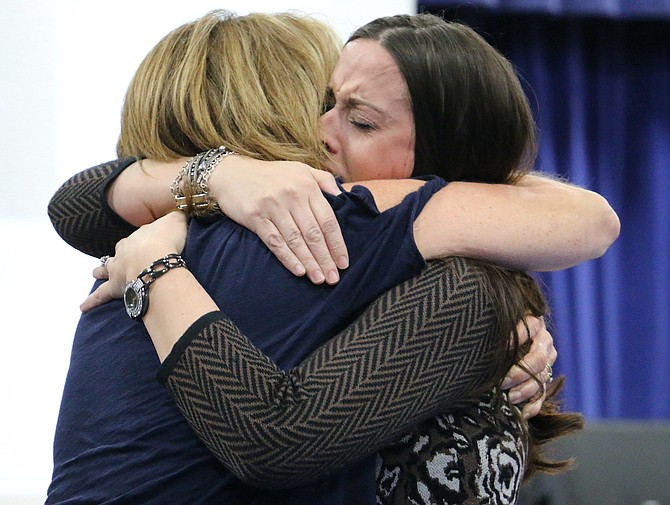 Empire Elementary School STEM coach Adrienne Wiggins fondly thinks back on moments like dressing up as the science teacher from “The Magic School Bus” with students later telling her she was their own Ms. Frizzle because she had inspired them.
This week, after being honored as Educator of the Year, Wiggins thanked her family for going out to collect random dirt samples near the Carson River so she could try her “crazy ideas” for classroom experiments at home.
“Teachers are seen as the know-all, be-all and expected to be perfect, and it’s important for students to see we make mistakes, too,” Wiggins told the Appeal on Wednesday. “We have failures and that’s OK. It’s really sharing that with the students.”
The Carson City School District this week celebrated its outstanding educators and employees of the year. Wiggins was named the district’s Educator of the Year. Kerri Finn, school nurse and clinical aide for Pioneer High School, was named Education Support Professional Employee of the Year, and Pioneer Academy Principal Jason Zona was honored as Administrator of the Year.
Wiggins and Finn were selected from 25 site winners including 11 teachers and 14 ESP employees chosen from peers and administrators. The Administrator of the Year was selected from nominations submitted by 27 school administrators. Each candidate endured a series of interview questions from a panel of judges. 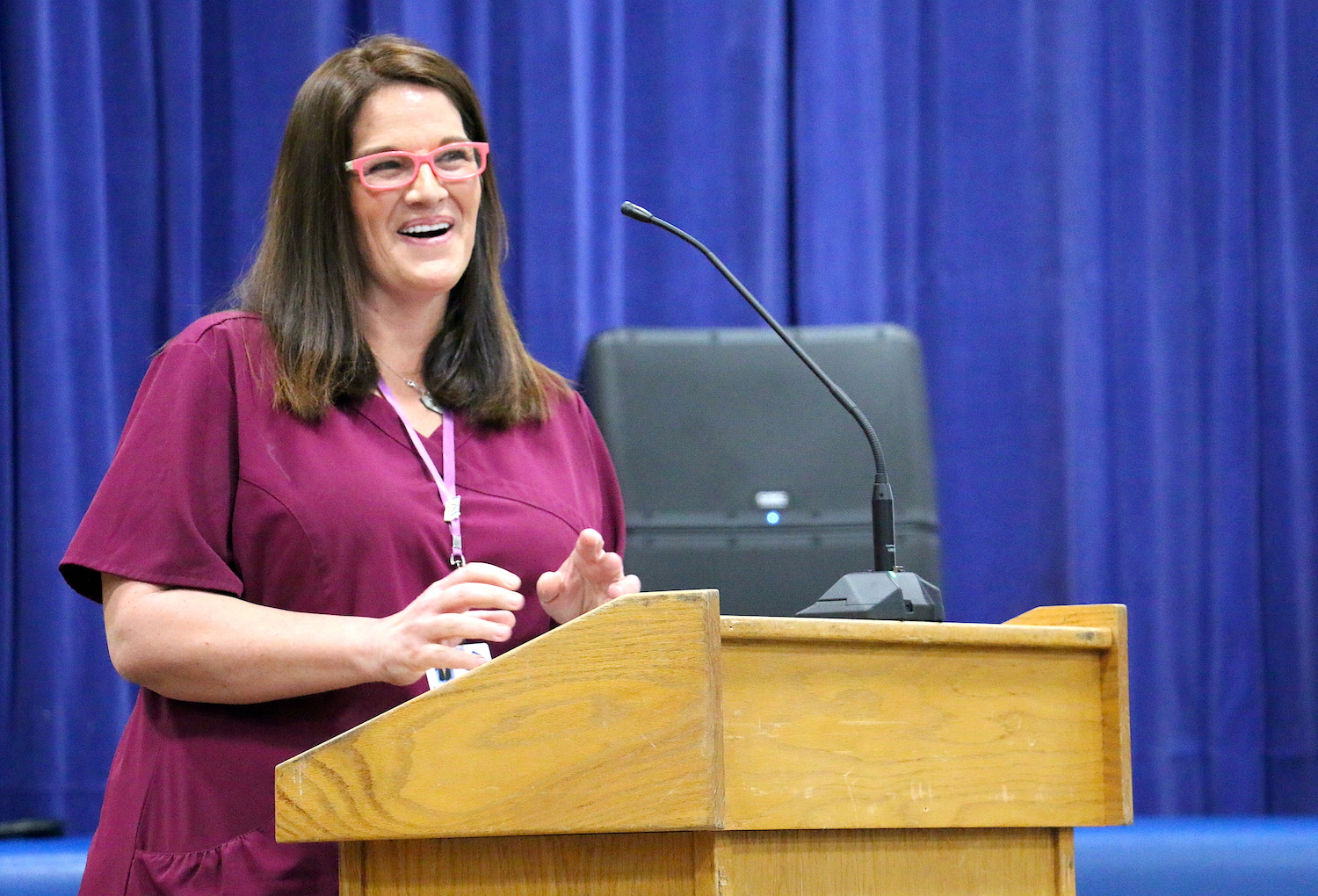 Kerri Finn, school nurse and clinical aide for Pioneer High School, was recognized as the district’s Education Support Professional Employee of the Year. (Photo: Jessica Garcia/Nevada Appeal)
Recipients on Tuesday were provided an opportunity to express their appreciation, with most crediting colleagues and families for support.
Some referred to their joy of teaching, serving students in their capacity or advocating for better education through stronger engagement. Some were members of multi-generational families rooted in the district with ties from past educational careers or having developed a deep love for the community, while others shared how they relocated from out of state or from neighboring districts.
Shiree Carter, cafeteria manager at Fritsch Elementary School, was honored for being a “five-star chef who makes the best pizza in Carson City,” said district spokesman Dan Davis, who was the event emcee. When menu options had been limited to spaghetti and Caesar salad, making the children frustrated by the lack of food available, Carter sat with the students and showed them the meal could be more appealing by applying ketchup to their chicken.
“My kids like to brag, ‘My mom’s the lunch lady,’ even though they’re grown now,” Carter smiled. “I’m really happy to be a part of Fritsch. We say, ‘Teamwork makes the dream work.’ Everybody has each other’s back there.”
Wiggins, also the Educator of the Year at Empire itself, earlier in the evening had said she thought her first accolade should belong to all of her colleagues.
“When we started this journey (to become a STEM school), they jumped on that bus with me,” she said Tuesday. “I’m thankful to the administration they have pushed every initiative we have been through. It is a wonderful community.”
On Wednesday, Wiggins told the Appeal she returned to campus feeling an “overwhelming amount of support” from district and Empire staff and especially her students.
“What is more powerful to me is the amount of students from school from kindergarten all the way through fifth grade that have come up to me and hugged me,” she said. “I think last year it’s been kind of tough, and it’s all about hope and giving them that little glimpse of hope and letting them know we can still do this. I am super proud of our staff at Empire to become a STEM school and right as we started when COVID happened.”
Wiggins also was recognized as Educator of the Year in 2019.
She is eligible to compete statewide for Nevada Teacher of the Year.
Finn attended Fritsch Elementary School, Carson Junior High School and Carson High School. Finn has served as the president of the Carson Education Support Association and often can be found rallying in front of the Nevada Legislature speaking to state officials about making education and increasing funding.
“I’m so honored and humbled to be honored at Pioneer,” Finn said Tuesday. “We celebrate our students’ strength when they’re going through tough times. We motivate them to be a better person. As far as being present, I do strive to advocate for my people.” 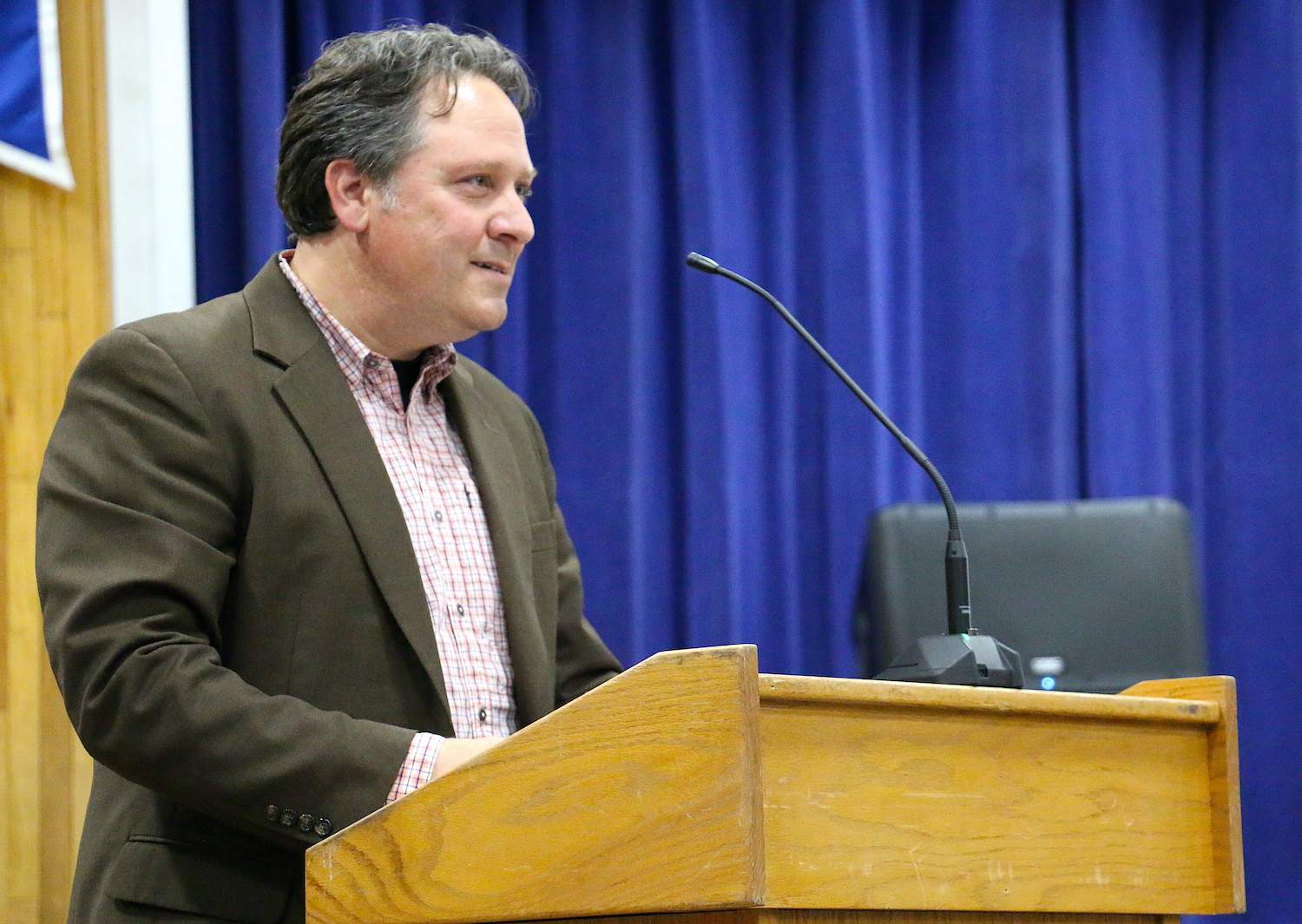 Pioneer Academy Principal Jason Zona was recognized as the district’s Administrator of the Year. (Photo: Jessica Garcia/Nevada Appeal)
Zona said Tuesday he’s spent 15 years as a high school principal and eight months now as an elementary and middle school principal, which has “rocked my world.”
“Thank you, school board, for letting us go outside the lines at Pioneer and be a little bit different,” Zona said. “Thank you for letting us do what we do at Pioneer. We have an amazing staff. What we learned is we just can’t be an island at Pioneer. We’ve really had to lean on other administrators. … I appreciate you all.”
ESP Employees and Educators of the Year recognized Tuesday include: