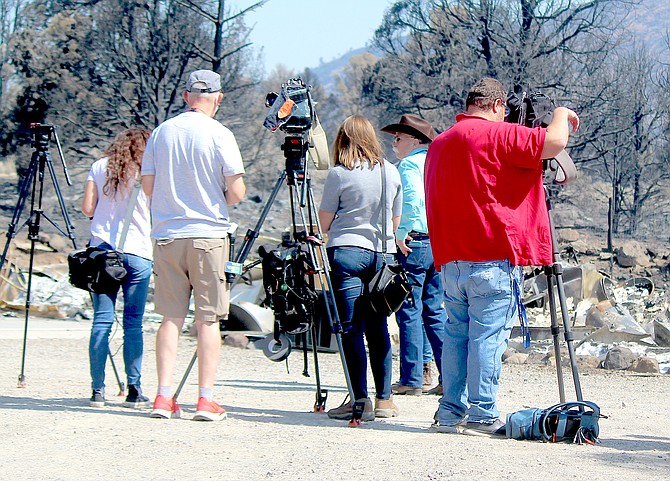 Television crews prepare for a July 28, 2021, press conference in front of the foundation of a home lost in the Tamarack Fire above Holbrook Junction.
Photo by Kurt Hildebrand.

A claim exceeding $85 million has been filed with the U.S. Forest Service for damage caused by last summer’s Tamarack Fire.

Attorney Bill Jeanney said filing the claim was the first hurdle before a lawsuit can be filed.

Started by lightning, the Tamarack Fire was first reported July 4, 2021, but Forest Service officials expected it to burn itself out. A week later, they decided not to insert a fire crew, even though the fire had grown. Then on July 16, 2021, the fire exploded to life, sending flames toward the historic town of Markleeville and a column of smoke into the stratosphere. By the time it was done, it had claimed 25 structures and burned 68,696 acres from the Sierra to the Pine Nuts.

Under federal statute, the government has six months to accept or reject the claim.

“In 36 years of practice, I’ve never seen a government agency respond,” Jeanney said. “We have to jump over these hurdles.”

The claim filed with the Forest Service includes 27 claimants and another two cases that are under review, Jeanney said, which could bring the number to 29.

A dozen of those lost property in Douglas County while the rest were Alpine County residents.

“I’ve got one client living in a tent on his property,” Jeanney said. “I feel bad for our clients having to endure the claim process when we all know this is going to end up in a lawsuit. It’s not beneficial to those who have been so dramatically affected by this that they can’t get to a courtroom and get a resolution one way or another.”

Once the case enters the courts, the government will dispute some of the claims.

“Some of the claims may not survive motions by the government to strike them,” Jeanney said in a letter to his clients. “Other values will be in dispute by the government and only the court will decide the values that we will be able to proceed at trial.”

It has been 35 years since the July 29, 1987, Acorn Fire which was the last major fire that resulted in a lawsuit against the Forest Service. It would be more than 11 years before those claims were settled. Bradley, Drendel and Jeanney represented the clients in that case, as well.