The Rivalry is paused, again 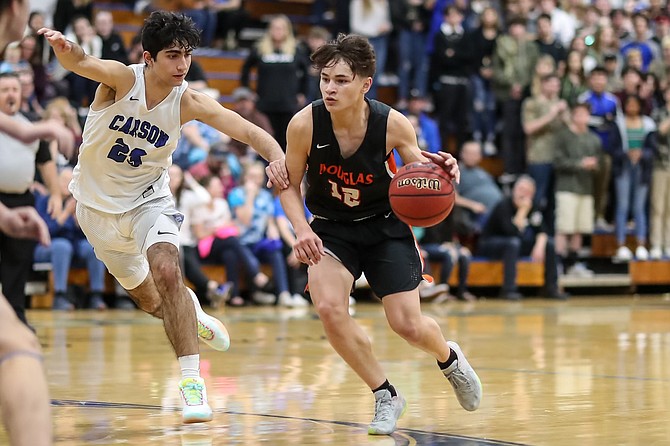 Carson High's Parsa Hadjighasemi guards Douglas' Dakota Jones during a game in February of 2020. With the Carson City School District canceling school for Thursday and Friday, both Carson and Douglas basketball games have been postponed.
Photo by Ron Harpin.

"Speaking with Mr. (Bob) Chambers, we will reschedule all league contests and will resume our athletics and activities on Tuesday (Jan. 18) when we resume classes," said Roman.
Both girls and boys basketball were originally scheduled to play in Minden Friday with the girls' contest starting at 5:15 p.m.
As of Wednesday evening, a make-up date had not been scheduled.
The two team's second league meeting is still scheduled for February 11 in Carson.
More information on the CCSD closure can be found by following this link: https://www.nevadaappeal.com/news/2022/jan/12/carson-city-school-district-close-all-schools-thur/

To stay up to date on the latest information, continue to follow the Nevada Appeal and Record-Courier online.