Joe Santoro: No passing = no success or fans for Pack 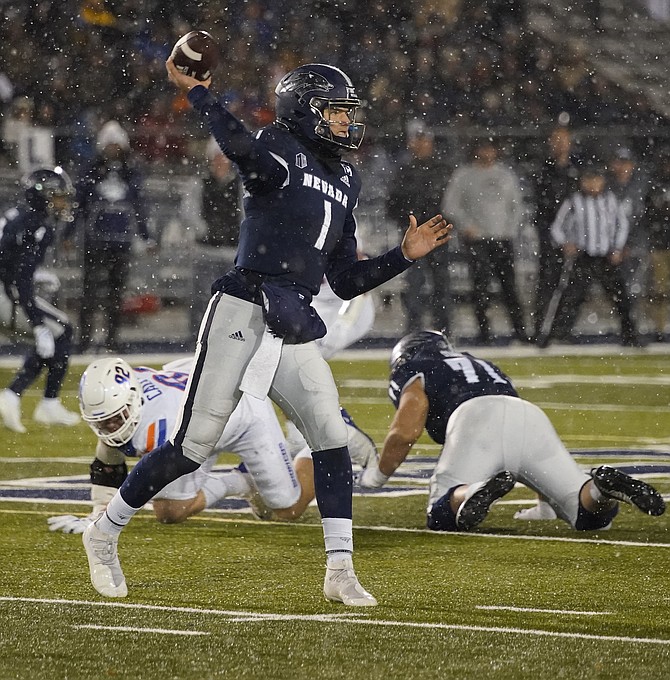 The Nevada Wolf Pack football team has put Northern Nevada to sleep. Head coach Ken Wilson’s first Pack team has turned the sport of college football into a tedious, tiresome, monotonous torture chamber for its fans. Wilson claims he is a devoted follower of Saint Christopher Ault, saying a dozen “Hail Aults” each night before he puts head to pillow. But Wilson in the past 30-plus years must have been too busy kissing his idol’s feet to fully grasp the preaching of Father Chris. The first commandment according to Saint Chris, as any Pack fan knows, is “Thou Shalt Not Bore Your Fan Base to Death.”

Wilson this season has sent Pack fans screaming well past boredom into an apathetic haze. Pack fans aren’t even interested enough this year to boo Boise State. Just 14,960 fans showed up on Saturday to see Boise turn Mackay Stadium into their personal playground, romping in the snow and cold like giddy 5-year-olds. It’s the smallest crowd for a Boise State game at Mackay since 13,460 showed up in 1985. In 1985, keep in mind, that crowd was almost a sellout.

Mackay Stadium this past Saturday night, for the most part, looked like Virginia Street on New Year’s Day morning, complete with stray beer cups blowing in the wind. Ault always preached that Northern Nevada has to be given a show. It had to be entertained at all times. This, after all, is Reno. There’s competition for the entertainment dollar. This isn’t Boise. Ault knew he had to leave the Northern Nevada audience wanting more so they would come back for more. This year’s Pack crowds leave Mackay wondering why they left the house in the first place.

Ault knew that the best way to entertain Pack fans was to score points. A lot of points. Every game. Keep the scoreboard humming and the fans will keep the turnstiles humming. With Wilson’s Pack there isn’t even a need to turn the scoreboard on. The Pack scored just three points last Saturday against Boise State and even on that field goal looked like a bunch of distracted second graders during a fire drill.

Wilson, a career defensive coach, has to fix his offense this off-season. The Wolf Pack offense has been stranded on the Island of Misfit Toys all season long. They were, after all, the toys that Jay Norvell abandoned last year before Christmas so we knew it wouldn’t be pretty. And Wilson playing the role of Hermey the Elf-Turned-Dentist for all his broken toys was heartwarming when the season started. But now it is just sad. This Wolf Pack offense is averaging 19 points and 281 yards a game. And at the end of the game you have no idea how they even got those 19 points and 281 yards.

What we’ve seen this year is the opposite of entertaining your fan base. It’s the anti-Ault philosophy. Didn’t Wilson steal a few game films from his years at Washington State and Oregon? Did he even watch the Wolf Pack offense all those years under Ault or even Jeff Tisdel? Wilson should know better than anyone that the offenses his head coaches (Ault, Tisdel, Mike Leach, Mario Cristobal) created during his career as an assistant covered up a lot of sins by the rest of the team. Most of those sins, after all, were by his defenses. With this Wolf Pack offense, every mistake is magnified. The seats at Mackay suddenly become 30 degrees colder than the temperature. The $5.50-a-gallon gas you burned getting to and from the game eats at you the rest of the week. You end up feeling like you are on the Island of Misfit Fans.

If you can’t throw the ball efficiently and productively, you can’t win anything meaningful in college football. The Wolf Pack has four touchdown passes this season. They don’t even have one for the thumb yet. Carson Strong passed for four or more touchdowns in a game six times just last season. How did this happen so quickly? The Pack changed quarterbacks from one season to the next before many times and each time the program didn’t revert back to 1935. Why did it happen this year?

One of the saddest things about this year is that the Wolf Pack practically invented the art of the throwing the football. Quarterback Stan Heath set NCAA records in 1948 with 2,055 yards and 22 touchdowns. The Wolf Pack led the nation in passing yards per game in 1946 (Bill Mackrides), 1948 (Heath), 1993 (Chris Vargas) and 1995 (Mike Maxwell). Maxwell’s 401.2 yards a game in 1995 is still the 15th-best season in FBS history. Vargas’ 387.7 yards a game in 1993 is still 23rd-best. Mackrides led the nation with 17 touchdowns in 1946. Wolf Pack receivers Trevor Insley, Alex Van Dyke, Geoff Noisy, Nate Burleson and Damond Wilkins are all over the NCAA record books. And they didn’t do it by running the ball. Quarterback David Neill is arguably one of the greatest freshman quarterbacks in FBS history. His 361 yards per game in 1998 is a record for a FBS freshman, as is his 611 yards against New Mexico State and his 18.5 yards per attempt against Idaho that same season. Neill had 480 yards on 26 attempts (20 completions) against Idaho, as well as five touchdown passes. This year’s quarterbacks are averaging 5.4 yards per attempt and are still looking for touchdown No. 5. You can’t tell the history of the forward pass in college football without talking about the Wolf Pack.

The Pack, though, is not alone. The Mountain West has some of the worst passing teams in the nation this year with Nevada, San Diego State, Wyoming, New Mexico and, of course, Air Force. Boise State, Utah State, Colorado State and UNLV have also struggled to throw the ball consistently this year because of injuries and lack of talent. No conference this year knows the importance of a productive passing game than the Mountain West. Boise State switched to freshman Taylen Green and revitalized its entire team at midseason. San Diego State somehow found its quarterback playing defense at safety with Jalen Mayden and is now winning again. UNLV won four of its first six games before Doug Brumfield got hurt and now can’t win a game. Brumfield is back and UNLV is scoring points again but still can’t recapture its momentum of the first six weeks. Fresno State couldn’t win a game without quarterback Jake Haener, who went down with an ankle injury. Haener returned a few weeks ago and the Bulldogs now are a win away from the league title game. The Pack can’t find a quarterback to play consistently from one possession to the next and is still looking for its first league win.

The Wolf Pack men’s basketball team’s 3-0 start is all well and good. But beating Utah Tech, Grand Canyon and William Jessup, all at home, isn’t going to get you any Top 25 votes. We’ll find out a lot more about this Pack team as it goes on the road for seven of its next eight games. But there were some encouraging signs over the first three games to give hope that this team could be competitive in the Mountain West. Three freshmen stood out. Darrion Williams, from Bishop Gorman, might already be the Pack’s best player. The 6-foot-6 Williams is averaging 9.3 points and 8.3 rebounds a game and those numbers will continue to rise as his minutes increase. The same is true for two other freshmen, 6-3 Trey Pettigrew (8.5 points, 3.0 rebounds) and 6-8 Nick Davidson (10.3 points, 4.3 rebounds). Combine the three freshmen with newcomer Jarod Lucas (15.0 points a game) from Oregon State and veteran returners Kenan Blackshear, Will Baker, Tre Coleman, K.J. Hymes and Daniel Foster, and we might get some value for our entertainment dollar on the Nevada campus, after all, this year.

The biggest concern with talented and productive freshmen at a school like Nevada, of course, is the evil transfer portal. It’s one thing for a player like Williams, the Nevada Gatorade Player of the Year last year at Bishop Gorman, to sign with Nevada out of high school. It’s quite another for him to actually stay at Nevada. The Wolf Pack, after all, lost veteran players Grant Sherfield (Oklahoma), Desmond Cambridge (Arizona State) and Warren Washington (also Arizona State) and others to the transfer portal just a few months ago. Don’t think Pack coach Steve Alford has already forgotten that. Alford cut his teeth in college basketball when players were basically stuck at their schools and coaches like Bobby Knight could treat players like old gym socks. Alford now has to pamper his players as if they are spoiled Kardashian sisters and keep them all happy at all times. That is impossible to do at a school like Nevada.