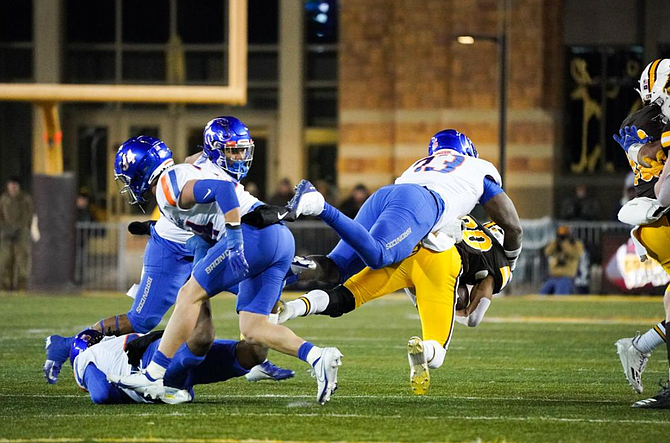 “I’m a firm believer that when you live a certain way and you live with a certain purpose and you live in grace, you’re going to make mistakes,” said Avalos, whose Broncos are No. 1 in this week’s Nevada Appeal Mountain West football rankings. “But eventually good things will happen for you.”

A lot of good things happened to the Broncos last weekend at Laramie, Wyo. Boise State beat the No. 3 Wyoming Cowboys, 20-17, clinching the Mountain Division title and a spot in the Mountain West championship game. The Broncos will be making their sixth appearance in the Mountain West title game on Dec. 3 when they host the West Division-champion Fresno State Bulldogs.

“I tell the young guys all the time,” Boise State wide receiver Billy Bowens said. “There’s nothing better than hosting and winning that championship.”

The Broncos, which last hosted and won the title in 2019, took a 20-17 lead against Wyoming on a 38-yard touchdown pass from Taylen Green to Bowens with 7:20 to play. Wyoming had taken a 10-0 lead in the first half on a 2-yard touchdown run by Wyatt Wieland and a 53-yard field goal by John Hoyland.

Boise State (8-3, 7-0) appeared well on its way to putting the game away with the ball at the Wyoming 39-yard line on third down with under a minute to play. Boise State running back George Holani, who had 132 yards, then fumbled the ball away. The fumble, which was forced by nose tackle Gavin Meyer, was recovered and returned 44 yards to the Boise State 21-yard line with 45 seconds to play by defensive end DeVonne Harris. It appeared the game was likely heading to overtime since Hoyland leads the Mountain West with 20 field goals this year.

Wyoming coach Craig Bohl, normally one of the more conservative coaches in the conference, then had an idea.

That shot – a pass from quarterback Jayden Clemons intended for wide receiver Joshua Cribbs in the end zone – was intercepted by Boise State’s J.L. Skinner. Skinner also intercepted another Clemons pass at the Wyoming 44-yard line with under two minutes to play on Wyoming‘s previous possession, giving him interceptions on two consecutive Wyoming plays.

“I want to be clear on this,” said Bohl, whose Cowboys are 7-4, 5-2. “I gave the green light on that play. Now, was it executed the way we liked? Of course not. But if you want to be critical be critical of me.”

A victory over Boise State would have put Wyoming in the driver’s seat for the Mountain Division title since both teams would have been 6-1 in league play and the Cowboys would have owned the tiebreaker.

“It is a gut punch,” Bohl said. “I’m disappointed for Jayden. He’s hurting. But we’ll bounce back. We are an emerging football team.”

And Boise State is back in the Mountain West title game.

Boise’s opponent in the title game in two weeks didn’t have nearly as much trouble in winning the West Division on Saturday night. No. 2 Fresno State (7-4, 6-1) destroyed No. 11 Nevada 41-14 in Reno, leading by 17 or more points over the final 47-plus minutes. Quarterback Jake Haener completed 29-of-42 passes for 361 yards and two touchdowns. Nevada has now lost nine games in a row to fall to 2-9 overall and 0-7 in league play.

“It was really nice to get a total team victory,” Fresno State coach Jeff Tedford said.

“I got here in 2019 and every year my goal has been to win a Mountain West championship,” said Haener, who put his name in the transfer portal after last season before deciding to stay at Fresno State. “Now I finally have the opportunity to do that.”

Fresno State had an improbable run to the division title. The Bulldogs fell to 1-4, 0-1 with a one-sided 40-20 loss at Boise State on Oct. 8. The Bulldogs have won six games in a row since the loss to Boise to earn a rematch with the Broncos on Dec. 3.

“After the Boise game when we were 1-4 and things weren’t looking great those guys in that (locker room) stayed poised and stayed confident,” Haener said.

‘Against Air Force you know you’re only going to get a limited amount of possessions and you’re going to be on the sideline a lot,” said Millen, who spent his freshman year at Nevada last season. “Every single possession you have to make count. We didn’t do that to start off the game and it put us in a huge hole (17-0 at halftime).”

Air Force has now won three games in a row while Colorado State has lost its last four.

San Diego State has now won three games in a row while New Mexico has lost eight in a row. The Lobos were 0-of-11 on third down and had just nine first downs and 209 total yards.

UNLV (4-7, 2-5) lost for the sixth time in a row and eliminated itself from bowl consideration. The Rebels started the year 4-1 and needed to win just two of its final seven games to become bowl eligible. Doug Brumfield passed for 288 yards and a touchdown and rushed for 55 yards for the Rebels against Hawaii.

“Frustrated is an understatement,” UNLV coach Marcus Arroyo said. “They played better than we did. We just got out-competed.”

The Rebels will host Nevada on Saturday afternoon (3 p.m.) in the annual Battle for the Fremont Cannon. This will be the first time in the rivalry’s 53-year history that both teams will enter the game with losing streaks of six or more games.

The Nevada Appeal’s Mountain West football rankings for the week of Nov. 28: