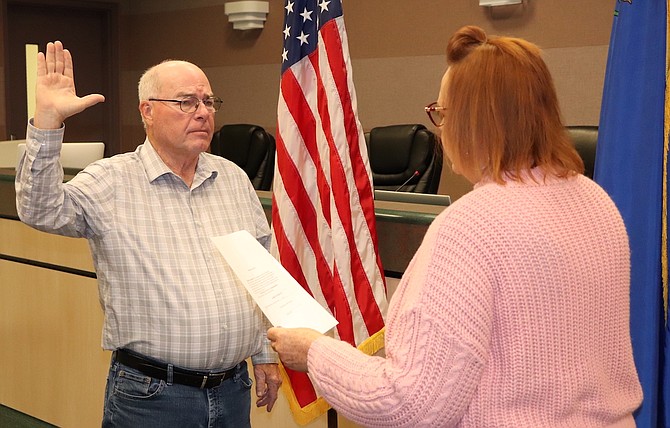 Harry ‘Bus” Scharmann takes oath in late November to replace Greg Koenig, who resigned after he won the Assembly District 38 seat in June.

This will be the first commission meeting for Harry “Bus” Scharmann, who was sworn in last month as Churchill County commissioner for District 3.

Scharmann replaces Dr. Greg Koenig, who was elected to the State Assembly District 38. Scharmann will serve out the remaining two years of Koenig’s term on the county commission.

Gov. Steve Sisolak appointed Scharmann based on recommendations from the Churchill County Republican Central Committee. Scharmann previously served on the county commission for eight years before he lost his re-election bid in 2020.

For consideration and possible action:

• Approval of the Agreement with Lombard Conrad Architects for services on the new Monoclonal Antibody Infusion Health Building on Miners Road for a cost of $194,235.

• Appointment of Jim Barbee, county manager, and Shannon Ernst, social services director, to the Central Nevada Health District Board for a one-year term upon approval of the district by the state Board of Health.

• Approval of a contract between Churchill County Social Services and Arc Dome Strategies to provide transition management of the Central Nevada Health District from Dec. 1 until July 30, at a cost not to exceed $32,000 or $4,000 per month for up to eight months.

• Approval of the creation of a bill draft request to allow county commissioners to select civil counsel.