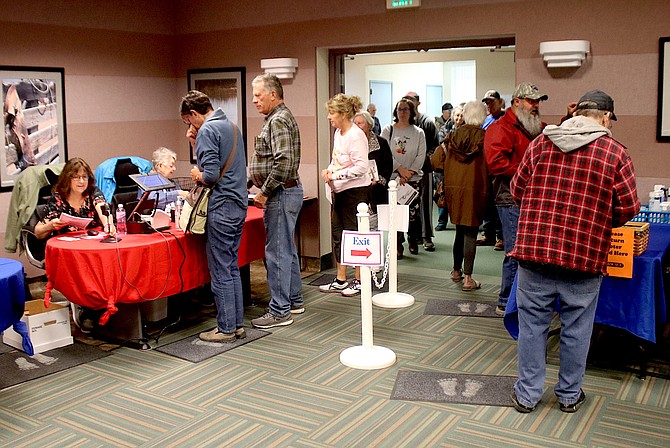 Voters pick up their ballots on the first day of early voting at the Churchill County Commission Chambers. Early voting ends on Nov. 4.

A light, yet morning rain on Saturday kept many county voters home for the day, but a steady stream of residents still voted for statewide and local candidates at the Churchill County Commission Chambers.

Not only are voters selecting local candidates in three races but they also are selecting candidates for the U.S. Senate, the state’s state constitutional offices including governor and four ballot questions.

Early voting at the Fallon Paiute Shoshone Community Learning Center, 8955 Mission Road, is Thursday through Saturday from 10 a.m. to 2 p.m.

The general election is Nov. 8 at both the Fallon Convention Center and Fallon Paiute Shoshone Community Learning Center from 7 a.m. to 7 p.m.

If returning a ballot in person, Rothery said ballots must be received in the Churchill County Clerk’s Office by 7 p.m. on election day, Nov. 8. Ballots may be returned in person to the clerk’s office or to a drop box outside the county building.

Mail-in ballots, which were approved by the Nevada State Legislature, must be postmarked on or before election day on Nov. 8 and received in the Clerk’s Office on or before the fourth day after election day which is Nov. 12. 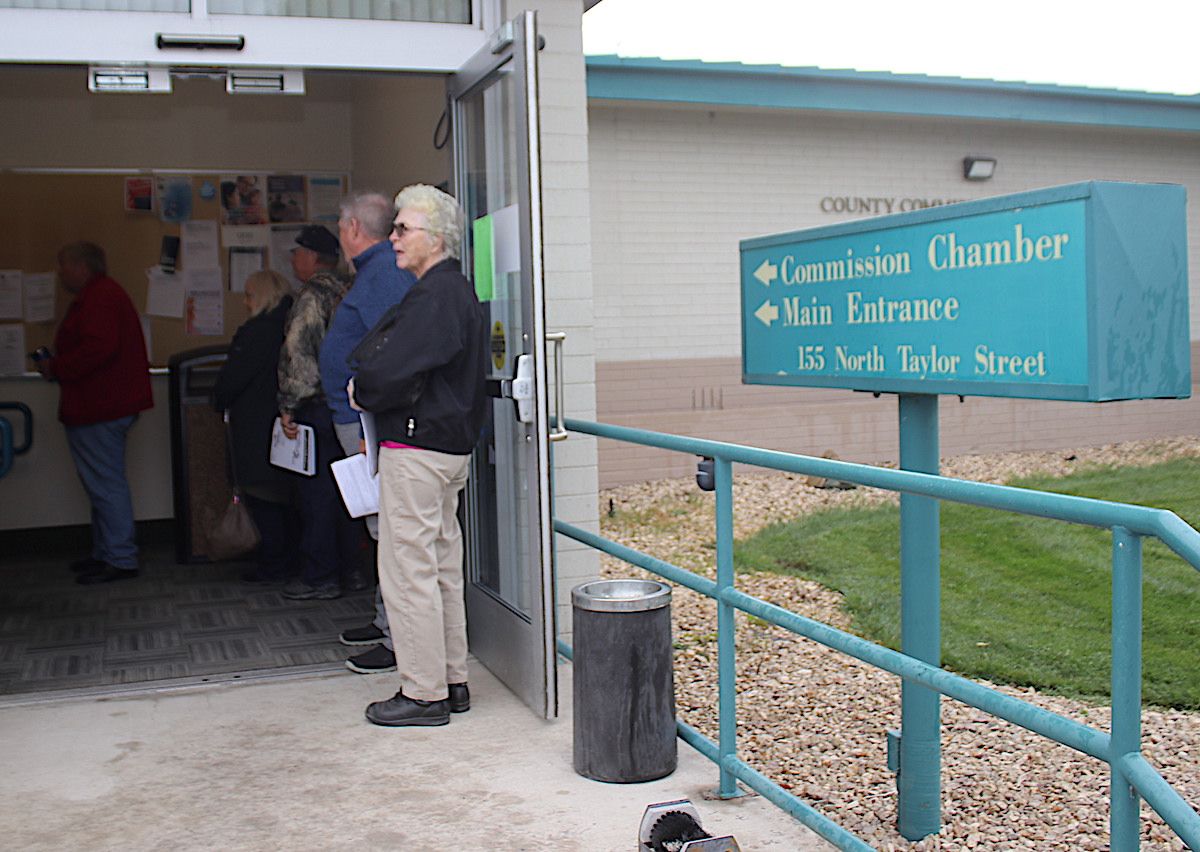 A short line stays dry inside the Churchill County Administration Building on Saturday due to a steady morning rain.

Those standing in line Saturday said they were anxious to vote and “get it over with.” The clerk’s office opened the doors to the indoor steps of the administration building's south wing so voters didn’t stand in the rain. Many of the voters who commented only want to give their first names or none at all.

An Army veteran said he came early ready to vote.

“This election is more important that others,” he said, adding the races for governor and U.S. Senate are on the top of his list.

“He’s going against the state,” another voter said of Gov. Steve Sisolak, who’s running for re-election. “I retired from the state.”

“Unless we reduce our spending, we’re going to lose our country,” he added.

Arthur, a Navy veteran for more than 22 years, said he wants to vote the Democrats out of office.

“Right now the Senate,” he said of his first concern.

Arthur said he’s not too familiar with the school board candidates, just the state incumbents an challengers.

Tom, another Navy veteran, said he learned more about the local candidates from both newspaper profiles and Candidates Night, which was held at the Fallon Convention Center on Oct. 18, and sponsored by the Lahontan Valley News, The Fallon Post, Lahontan Valley Broadcasting and the Churchill County Republican Central Committee.

“I listened to the candidates on the radio and learned more about them,” he added.

Eddie, who worked at Naval Air Station Fallon before retiring after 33 years, said she arrived to vote at 8:30 a.m. with her daughter

“Voting is important,” she said, also citing the Senate and governor’s races.

Eddie said she didn’t know the people that well who are seeking the four open seats on the school board. She also feels Sheriff Richard Hickox is doing a good job because he’s on Facebook all the time updating the community.

As for the four state ballot questions, Eddie said she will vote no on all of them especially Question 3, which would eliminate the closing voting during the primary election and also rank voting whereby voters select their top candidates and then pick a second choice and so on.

In addition to the school board race, the other two locals races are for Fallon City Council Ward 3 and sheriff. The other county officeholders — assessor, district attorney, public administrator, clerk-treasurer and recorder — were re-elected in June’s primary election because opponents filed against them. Voters, though, elected Myles Getto to the Churchill County Commission, Greg Koenig to Assembly District 38 and Dr. Robin Titus to State Senate 17.

Key dates for the general election

• The general election is Nov. 8 at the Fallon Convention Center and also on the Fallon Paiute-Shoshone Reservation.

• The last day for the clerk’s office to receive a ballot by mail is Nov. 8 at 7 p.m. if carrier envelope is not postmarked.

• The last day for mailed ballots to be received and counted by county election officials is Nov. 12.

• The last day for voters to “signature cure” or address any issue with the signature on their mail ballot is Nov. 14.