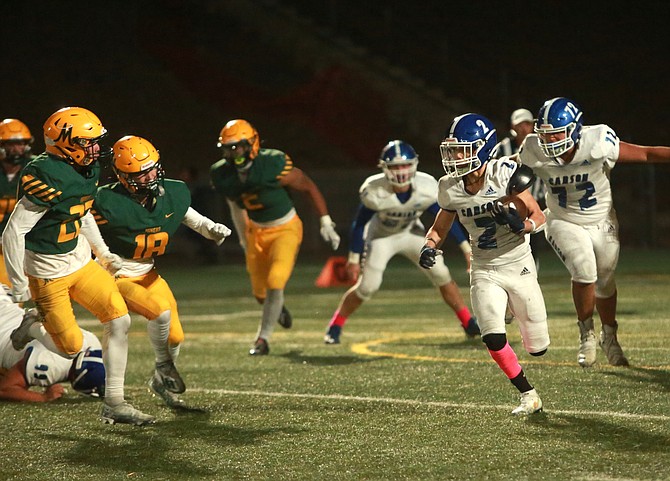 Carson High's Quentin Beck (2) hits the edge on a carry, during the Senators Class 5A first round regional contest at Bishop Manogue. Beck had two touchdown runs of 70-plus yards for Carson.
Photo by Carter Eckl.

Late in the first quarter, the Senators had stunned everyone in attendance playing level in a 14-14 ball game few may have expected.

However, Bishop Manogue was able to settle in, outscoring Carson 49-3 the rest of the way en route to a 63-17 win in the opening round of the Class 5A regional playoffs.

For Carson, there wasn’t any doubt on the sidelines that the Senators had saved their best half of football for the playoffs.

“Oh by far. We came out. We were really trying to shock the world. I think we played a first half indicative of what is to come in the future,” said Carson High head coach Ryan Boshard. 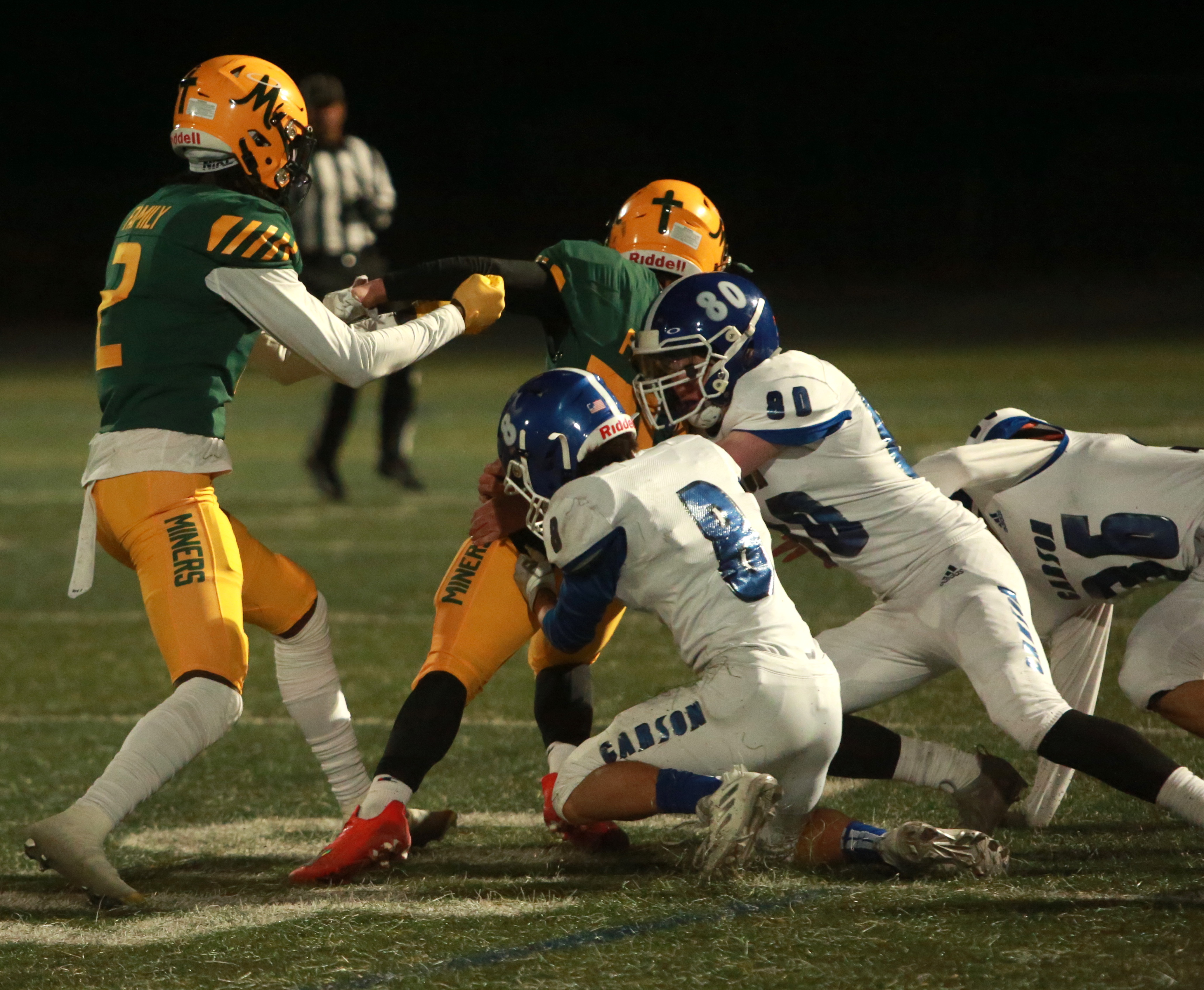 (Carson High's Miles Frewert (8) and Brock Bensmiller (80) combined for a tackle on Bishop Manogue running back Cody Fleischmann Thursday in the first round of the Class 5A regional postseason. / Carter Eckl)

Both teams went three-and-out on their first possession, giving Carson the ball back at its own 20-yard line.

On the second play of their second series, the Senators lit up their sideline.

Senior tailback Quentin Beck broke through a pair of Miner tacklers and sprinted 76 yards to the end zone to give Carson an early 7-0 edge with 8:12 to go in the opening quarter.

“That’s the greatest feeling for a running back, getting a breakaway touchdown,” said Beck.

He wasn’t done, either.

The Miners responded with back-to-back touchdown drives, jumping ahead on 38- and 32-yard touchdown receptions.

Starting back at the 20, Carson mustered three yards on two plays before Beck was off to the races again.

His second touchdown run went for 77 yards right up the middle as Beck sprinted to the end zone, tying the contest at 14-all.

“Those runs he made weren’t actually where they were designed to hit. He read it and made them. It was awesome,” said Boshard.

“I think they were pretty scared over there.  I know we wished to keep it a little closer, but it didn’t fall that way,” said Beck.

All in all, Carson rushed for 167 yards in the first quarter and finished the game with over 300 yards rushing in total, unofficially.

The Miners continued to churn on the offensive side of the ball, scoring on their next three drives to take a 35-14 lead with 7:21 left in the first half.

However, Carson was able to march back down the field and score again before the break.

The Senators went from their own 17 to the Miners’ 17 in large part due to a 59-yard breakaway run from sophomore Christian Gabriel, who got the call up from junior varsity this week.

“Our blocks today were way different than they were against Manogue a couple of weeks ago. Credit to the offensive line. They did a great job tonight,” said Beck.

After the long run, Lucas Gonzalez kicked through a 35-yard field goal to bring Carson within three scores, 35-17.

Bishop Manogue scored the final 28 points of the game to close it out, but it’ll be a bright spot for Carson, who was tasked with the Miners in the opening round of the playoffs for the second year in a row.

Boshard, who had coached with the program prior to becoming head coach, said Thursday’s final game gave those in attendance something to look out for next season.

“It was a rollercoaster ride. Up, down, left, right, but this team really persevered. They learned a new system and learned how to be with a new head coach,” said Boshard.

Bishop Manogue will go onto to take on No. 5 Reno Friday, November 4 at home in the regional semifinal.

Class 5A first round regional scores