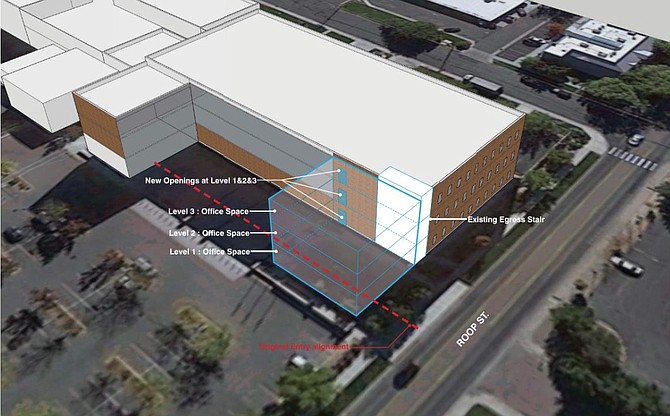 A rendering from TSK Architects shows a proposed expansion to the front of the Carson City Courthouse.

The Carson City Courthouse will be getting a makeover in the next three to four years, though the scope and costs of renovation are yet to be finalized.

On Thursday, the Board of Supervisors directed staff to pursue plans for a three-story expansion on the front end of the courthouse that could add around 8,000 to 9,000 square feet, with a goal of accommodating departments currently cramped.

“We’re dealing with this every day,” said Maxine Cortes, court administrator. “We are now bursting at the seams.”

Also in need of more room are the District’s Attorney’s Office, Department of Alternative Sentencing, and the Clerk-Recorder’s Office.

Carson City Public Works has been assessing facility needs of staff, in part because another justice of the peace will likely be required when the city exceeds 60,000 in population. The U.S. Census’ latest population estimate for the city is right under 59,000.

Supervisors, however, want to envision facilities for an even larger city, building long-term rather than in short, piecemeal increments.

“My hope is these improvements meet needs in the long-term, so we’re not revisiting this in 10 years,” said Supervisor Lisa Schuette.

The price tag for the courthouse expansion is estimated at $6 to $10 million, according to the public works department and TSK Architects.

“We need to start talking about where the money is coming from,” said Supervisor Stacey Giomi, pointing to redevelopment funds as a potential revenue source.

Another option supervisors considered was relocating the clerk-recorder to elsewhere in the city and using the space to move departments around. This would accommodate a new courtroom but not solve all the space issues — and renovation and relocations could cost as much as an outright expansion.

Clerk-Recorder Aubrey Rowlatt testified Thursday she wants her office to remain in the courthouse. She said this provides a continuity of services. The idea of moving makes planning for future election cycles difficult, she said.

“I’m happy to see it (the expansion) because it may keep us here,” she said.

Robert Nellis, real property manager for the city, reported the current city hall building is worth more than $4 million.

In other action:
• Supervisors approved an appeal of a planning commission decision that required a guest house off Kings Canyon Road become a non-rental property.

Owner and appellant David Johnson said the structure, built in 1950, has been taxed as a residence and used as a rental in the past. In 2019, he received a permit for a remodel but found residential zoning wouldn’t allow for a separate residence when he tried to renew the permit.  The Planning Commission later issued a special-use permit for the structure but conditioned the non-rental provision, following current zoning laws.

On Thursday, supervisors voted 4-1 to approve Johnson’s appeal. They found zoning law —much enacted in the last 20 years — conflicted with how the structure had been documented by the assessor’s office. Due to its age and unclear history, the structure deserved to be grandfathered in, the majority argued.

Supervisor Stan Jones was the lone vote against the appeal, citing calls from neighbors concerned about rentals.

Supervisor Maurice White said the appellant “must be made whole.” Johnson said he’s already spent $65,000 on the remodel, which is half complete.

“I just want to remodel it and make it what it should be” he said.

• Supervisors ratified, unanimously, submission materials for a $921,000 CDC grant aimed at boosting local healthcare needs in the wake of the COVID-19 pandemic.

The grant is being administered by the State of Nevada Division of Public and Behavioral Health with the expectation from the CDC that local health departments will receive 40 percent of the funds. To focus on public health workforce, the grant will run between Nov. 1 and Oct. 31 of 2027.

Carson City Health and Human Services has proposed using the grant to recruit and hire a chronic disease prevention and health promotion division manager — to oversee tobacco control and prevention, among other things — and a public health informatician. The grant would also be used for internship opportunities and leadership development for staff.