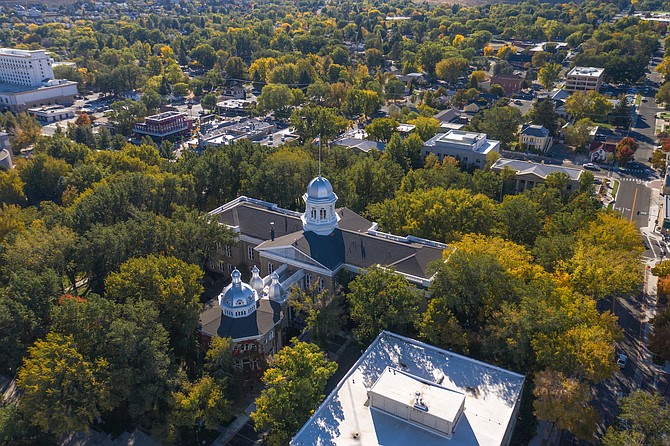 “We’re evaluating the pay package for state employees for the upcoming biennium,” Ben Kieckhefer said. “It’s a work in progress but we’re committed to giving state employees a raise.”

He said the governor’s budget will also provide “unprecedented funding to education.”

“They’re going to be very happy with what we propose,” he said.

Kieckhefer said Lombardo intends to follow through on his campaign promises to expand school choice in public and private schools.

His remarks came during a half-hour briefing with members of the press in his office.

He said the governor is also committed to working with the Legislature but that it will “take some negotiating,” since the Senate and Assembly are controlled by Democrats. He predicted the administration will develop a positive working relationship with lawmakers.

Kieckhefer also announced two executive orders issued and signed by Lombardo. The first, he said, rescinds all COVID-19 declarations, orders and emergency directives as long as eliminating those orders doesn’t cost the state federal money. The text of the order lists 52 orders and directives put in place by former Gov. Steve Sisolak. The synopsis points out that COVID-19 cases and hospitalizations are down significantly from their peak, that vaccinations are widely available now, “and many Nevadans have built up natural immunity.”

His second executive order directs the Department of Administration to review and make recommendations to greatly improve rules for hiring, retention and promotion procedures for state employees.

The order says Nevada state government has a 24 percent workforce vacancy rate and many state employees have not returned to the office, reducing the state’s ability to efficiently serve Nevadans.

The order says the process of hiring, retaining and promoting state workers must be simplified, sped up and improved to remove unnecessary barriers to state employment. He also called on agencies to develop plans to begin returning state workers to pre-pandemic, normal and customary office operations by the end of this fiscal year, July 1.

Kieckhefer also provided a list of Lombardo’s major appointments to his cabinet. That list includes nine directors who will remain in their current posts as well as a number of new faces.

One on the list is James Dzurenda, who will return to the position of corrections director.

In addition, he named term-limited state Sen. James Settelmeyer to head the Department of Conservation and Natural Resources.

The others on the list are Tom Burns of GOED, Jack Robb as director of Administration, J.J. Goicoechea to head Agriculture, DETR Director Chris Sewell, Taxation Director Shellie Hughes and Alan Jenne as Wildlife Department director