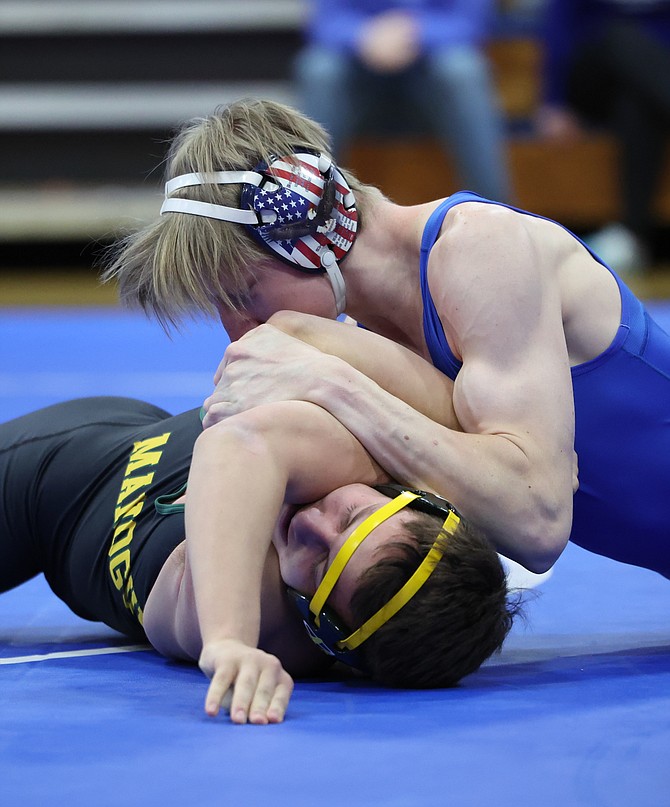 The Senators first swept Bishop Manogue, 78-0, to open up the triangular meet before dispatched Reed, 42-36, thanks to some late heroics from the Senators upper weights.

Darron Rey jumped out to a 3-0 lead for the Senators thanks to a quick takedown. With 13 seconds left in the opening round, Rey found six points for Carson with a pin.

At heavyweight, Dominic Porter needed even less time to put the Senators ahead.

Porter allowed his opponent to stand after an early takedown, but got behind his opponent’s legs and quickly turned his second takedown into a pin, jumping up in celebration as Carson took a 36-30 lead.

With Reed leaving 106 pounds open, the Senators solidified the win behind Porter’s pin at heavyweight.

“After Remer’s win, we were doing some math and it looked like it was going to come down to those two,” said Carson High head coach Nick Redwine. “Reed, I looked at it initially a 50/50. It could’ve went the other way very easily.”

Carson is 2-2 in dual meets so far this season with a triangular against Reno and Galena next week.

Senior Amber Perkins opened the Reed dual with a pin in 4:55 over Mackenzie Nash of Reed. Perkins had a 7-0 lead after nearfall points early in the third period.

Two more open weights from the Raiders left Carson with an 18-12 lead through five matches.

The Raiders had two pins at 150 and 157, setting up senior Zach Remer with an important match a 165 pounds.

Remer and Drake Polak of Reed were tied after the opening period, but a reversal in favor of Remer gave the Senator wrestler a 4-2 advantage after two.

With just under a minute remaining in the match, the senior worked his way toward the edge of the mat, allowing him to put on a switch which gave Remer a 6-2 lead en route to a 6-4 decision win.

“I know with my body type, I’m a long dude so those long switches are useful,” said Remer. “I felt it and he kept on pushing in, which was perfect.”

JT Heaton followed Remer’s decision win with one of his own by a 12-5 margin at 175 pounds.

Against Bishop Manogue, the Senators had wins by fall in all four matches they competed in.

Remer needed just 48 seconds to win by fall in his matches while Isiah Oliva picked up a pin in the third period.

“That felt great for the team and boosted morale. It showed we can hang with the teams in our league and that we definitely belong here,” said senior Jon Barnes-Hurt. “My four years here have been great. A lot of improvement and a lot of work that I needed. … It’s been a great for sure, so far.”

Redwine said this class of seniors have been a big part of the program’s growth over the last four years.

“Amber and Ellah (Olson) are both fantastic wrestlers that I am lucky to have here,” said Redwine. “John was a freshman on varsity his first year. … As he’s gone through his high school career, he’s really come into his own. Zach comes to practice, he works hard, he gets wins when we need them. I’m going to miss all four of them. They’re great kids.”

Both Senator basketball teams had trouble with McQueen Tuesday in losses.

The Carson High boys team couldn’t hang with the Lancers in a 76-47 loss in which McQueen outscored the Senators 24-10 in the third quarter.

The loss moved the Carson boys to 5-8 overall this season and 2-5 in Class 5A North league play.

Carson High girls couldn’t get their first win of the season either, falling 54-21. McQueen led 31-9 at the halftime intermission.

The Senators are now 0-8 this season with an 0-6 record in league play.

Douglas High girls basketball took down Galena Tuesday by a final of 65-29.

The Tigers outscored the Grizzlies by double digits in three of the four quarters en route to the victory.

Zora Simpson was 7-of-13 from the field, ending the contest with a team-high 16 points.

McKenzie Main and Bre Williams each had eight points in the win as well.

Douglas High boys basketball was able to keep Galena at a distance Tuesday after, taking a 42-30 lead at halftime.

The Tigers were able to pick up the win 77-69 behind 17 points from Theo Reid.

Reid had a double-double with 19 rebounds and added three blocks to his resume in the process.

Douglas boasts a 9-7 overall record and 5-2 clip in league play as it went into Friday night’s contest at Carson High.