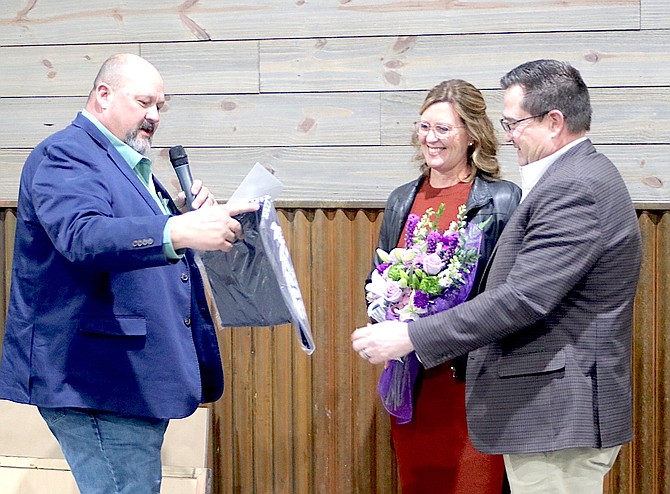 The community thanked and bid their farewells last week to two Churchill County commissioners who are taking different paths.

Commission Chairman Pete Olsen served for three four-year terms, and state law prevented him from seeking another term. Olsen, a longtime dairyman in Churchill County, first ran in 2010. He led the commission as chairman for the past eight years. Commissioner Dr. Greg Koenig, who was elected two years ago, successfully ran for Assembly District 38 to replace Dr. Robin Titus, who moved up to become the state senator for District 17.

The mood was festive during their community farewell reception at the Rafter 3C Arena. County Manager Jim Barbee said he has worked alongside with Olsen for 12 years, first as director of Nevada Department of Agriculture and then for the past five years in Churchill County.

“It’s been a great relationship,” Barbee said to a crowd of several hundred people. “We have gone through some good times, some difficult times.”

Fallon Mayor Ken Tedford cited the Big Dig, a project where city and county workers along with the Truckee-Carson Irrigation District, volunteers and state and federal agencies spent days during the late spring of 2017 digging out a 17-mile channel known as the Big Dig. The wide canal carried water from the Carson Lake to the Carson Sink and then to the Stillwater National Wildlife Refuge.

A heavy snowpack in the Sierra stored enough water content six years ago to fill three Lahontan Reservoirs, and government officials had to find a way to divert as much water as possible from the construction of an emergency weir and spillway on the V-line Canal. The excess water flowed south through the desert and then east.

“Look around and you’ll see some of the good things that happened,” the mayor said. “I appreciate his 12 years.”

Barbee said it was a pleasure to work with Koenig. The Fallon optometrist was elected to the commission in the 2020 coronavirus pandemic year, but he had previously served 12 years on the Churchill County School Board.

During the last three months of 2022, the U.S. Senate and House both passed the National Defense Authorization Act, which included the expansion and modernization of the Navy’s Fallon Range Training Complex. The Navy first rolled out its proposal to the public in 2016.

Tedford said he has enjoyed working with both Koenig and Olsen.

“The last couple of years have been a pleasure to work with Greg,” Tedford said. "Now, he will leave and work with the Assembly.”

Tedford stressed a number of times how the city and county work well together. He said many of the area’s residents don’t realize the closeness of the two boards.

In two short years, Koenig said the important issues facing the area were the county’s response to COVID, the building of the Rafter 3C Arena and the creation of the Central Nevada Health District, which occurred in 2022.

Olsen thanked the mayor for his comments, saying his 12 years don’t stack up to Tedford’s 30-plus years of serving the community.

“He has a wealth of knowledge,” Olsen said of the mayor. “He is a good friend. We worked for the benefit of the community.”

Barbee reflected on Koenig and his time on the county commission.

“I really appreciate his service and steady leadership he has provided over the last two years,” Barbee pointed out.

Barbee said he appreciates Koenig stepping up to represent the county in the Assembly and knows of the sacrifices the former commissioner will face in Carson City.

“I really appreciate your service, Greg, that you were always straight and direct with me,” Barbee said. “We always knew where you were coming from. You have been a real joy to work with.”

After Barbee presented a drawing of the Rafter arena, Koenig said he received a gift from Glen Lee, a shape of Nevada cut out from old license plates. Koenig said a saying on the gift was the expression, “Home Means Fallon, Nevada.”

With his new venture ahead of him, Koenig said he will look at his two years on the commission fondly.

“Fallon is a great place, and that’s in my heart forever,” he said. “I will do the best I can to represent you in Carson City.”

“There were a lot of hard, challenging decisions made during COVID that were hard for our community, hard for our families and hard for the folks we work with,” Barbee said.

According to Barbee, it was a great accomplishment for lawmakers to pass the NDAA last month. Olsen emphasized it was teamwork that led to the FRTC’s expansion. He said Jeremy Drew, project manager-senior resource specialist with Resource Concepts, and consultants in Washington, D.C. were a team.

As Olsen wrapped up his remarks by thanking both Julie Guerrero-Goetsch, administrative services manager for Churchill County for organizing the retirement event, and the county employees he served. Olsen said during his tenure as a county commissioner, he met many people and learned more about his county and city.

Olsen reflected back to 2010 when he first ran for office. More than 12 years ago, Olsen said then-Commissioner Norm Frey talked into running for the commission.

It didn’t take long for Olsen to make a decision.