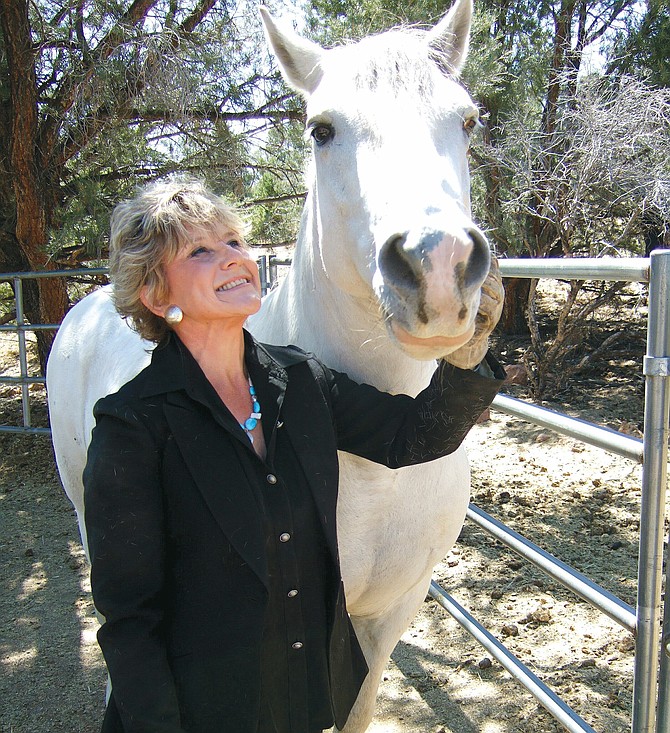 Singer/songwriter Lacy J. Dalton ended 2022 on a high note after winning several awards, and she looks forward to a busy 2023. She’s working on a new album and planning a trip for shows in Montana, Wyoming and Texas.

The Virginia City resident said she has no plan to slow down, and she proved that after how much snow was dumped at her home in the highlands and she spent a few days shoveling for about four to five hours.

Besides shoveling, being at home has given her time to work on her next project that she said is very special to her: “The Black Sheep.” She said it’s music for people who have not found what they’re looking for in organized religion, but they throw out belief in any higher power.

“It is to remind them that some of the messages of some of the great teachers and Christ’s message was very simple: Love God with all your mind, heart and spirit; love yourself and love your neighbor,” she said. “That’s some of the best advice I’ve ever heard, and I try to live my life by that.”

The songs talk about the divisiveness in the USA and the world from Dalton’s point of view. Her first song she wrote “The Devil by a Different Name” is one to remind people that we’re a long way from loving each other.

“We need to grow up. This world is not a child anymore,” she said. “We need to build bridges and not walls.”

Dalton plans on recording “The Black Sheep” at her bass player’s home studio. She said technology has come a long way to get a quality recording without having to invest in studio time, making it easier for independent musicians like herself.

Dalton said she was surprised to learn she won the Lifetime Achievement Award from the Josie Music Awards, the largest indie award show in the world.

“It was a total surprise,” she said. “I had no idea they even knew I existed.”

She was presented the award in October at the Grand Ole Opry in Nashville, Tennessee. The award is given to “those who have made a profound impact in music through their creative contributions or outstanding artistic significance.”

She said the award was an honor.

“When you’re surprised with something like that so far down the road, it is quite the honor,” she said.

The Josie Music Awards also presented Dalton with a Platinum Album Award for her work with Willie Nelson on his album “Half Nelson.” She recorded a duet with Nelson on the song “Slow Movin’ Outlaw.”

Dalton spent much of her career as an independent artist. She said without a big record company, it is hard to promote yourself and spend the money doing so.

She said sometimes it takes longer to be discovered by some, and that happened in 2019, when she was recognized with the Peter Hutlinger Award for Music Excellence for an album that she released in 2006.

“This is what happens when you’re not with a big record company,” she said.

The album “The Last Wild Place: Anthology” is different than some of the bigger hits she had because she said the music has a more folk feeling to it.

“It was the music that was in me at the time,” she said. “It holds up better for me than a bunch of hits that I did earlier, or even that I wrote earlier.”

Dalton has toured with a full band, and the manager insisted she had every instrument included on her record. With 10 bandmembers, they needed at least 10 crew members. After that tour, she said she pretty much broke even and was working for free because the costs were so high.

Understanding contracts is important too. She said she doesn’t make a single penny off her most played song, “Everybody Makes Mistakes.” The song, released in December 1981, reached No. 5 on the Billboard Hot Country chart.

Dalton grew up in northeastern Pennsylvania and she moved to Santa Cruz, California, when she was 21. She eventually had to move to Nashville for business.

“So, I took my four horses and dogs and lived there for eight years,” she said. “I was so homesick for the west.”

She longed to return west and eventually made her way back. She said she enjoys it out here because the spaces are more wide open, and she says the people are more open-minded.

She ended up in Virginia City because it gives her the feeling of being in the wild, yet it is close to everything she needs including her band, based out of California.

She decided to live in Virginia City while drinking tea with a friend one night on E Street. The two of them heard a noise, and the friend gestured with her finger to listen. The women went on the porch and there were wild horses outside. That solidified Dalton’s decision.

“If they can be wild and free here, maybe I can too,” she said.

For information, go to www.lacyjdalton.org.