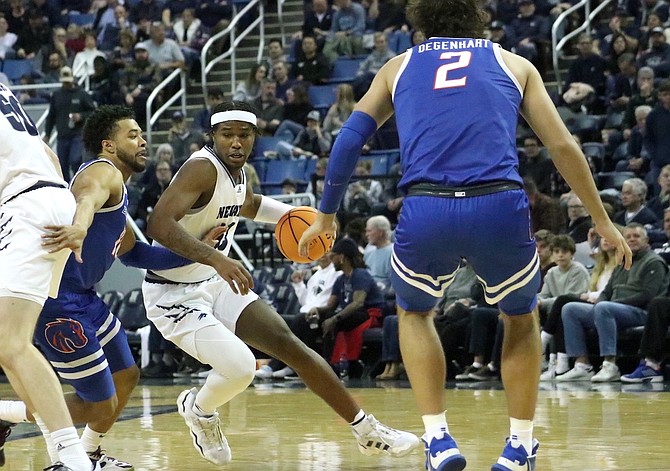 Nevada’s Kenan Blackshear looks to get past the Boise State defense during the Wolf Pack’s 74-72 win Dec. 28, 2022.
Photo by Steve Ranson.

Lucas’ highlight was a 3-pointer with just under three minutes to play that cut Boise State’s lead to 65-64. The rest of his evening was a frustrating flurry of missed shots and turnovers. The shooting guard missed 10-of-13 shots overall and turned the ball over five times (he had just nine turnovers over the first 13 games). His fifth turnover on Wednesday nearly cost the Pack the game with 1:16 to play, trailing 68-67. Saving his night was a 3-of-6 performance on threes after going 5-of-20 beyond the arc over the two previous games. All 14 of his points came from the line (5-of-6) or on threes (he was 0-for-7 on twos). Lucas, though, stayed active all night, dishing out his most assists (two) and grabbing his most rebounds (four) since he had six rebounds and three assists against Tulane nine games ago on Nov. 21.

Blackshear basically took over the game with four minutes to play, put the Pack on his back and carried his teammates to victory. With the Wolf Pack trailing 63-56, Blackshear fed Will Baker for a jumper (4:08 to go), stole the ball from Marcus Shaver (3:51), assisted on a 3-pointer by Jarod Lucas (2:56), converted a 3-point play to tie the game at 67-67 (2:05), stole the ball, got fouled by Shaver and drained two free throws for a 69-68 lead (1:11) and then attacked the basket twice for layups with 37 and three seconds to go for leads of 71-70 and 73-72. It was as impressive a performance in crunch time by one player in an important Mountain West game as any in recent Pack history. Blackshear finished with 20 points, five assists, two steals and two rebounds and did it all in just 27 minutes, since he played just 10:30 in the first half because of two fouls. Four of Blackshear’s five assists led to 3-pointers (one each by Tre Coleman and Nick Davidson and two by Jarod Lucas). Blackshear scored 16 points with four assists and two steals in his 17 second-half minutes.

The 7-foot Baker played 13 minutes in the first half, missed all three of his shots, had just one rebound and scored just two points. A dunk with 16:27 to go in the second half, though, ignited the Pack center just in time. Baker played 10 minutes in the second half and scored 11 points, making all four of his shots. He was one of the biggest keys to the victory, scoring seven points in a span of just 67 seconds, cutting a 61-54 Boise State lead to just 63-61 with 3:41 to play. Baker finished with 13 points in 23 minutes, draining 5-of-6 free throws. It was that 67-second, seven-point outburst, though, that clearly saved his performance since he only had two rebounds, didn’t have a block, steal or assist the entire game, and missed his only two 3-point shots.

The 6-7 Coleman drained a 3-pointer for a 28-27 lead with 1:56 to go in the first half, giving the Pack its first lead in over 13 minutes (9-7). He then disappeared on the offensive end the rest of the game. Coleman took all of his shots (2-of-4, all threes) and scored all of his points (seven) in the first half. Coleman, playing 18 minutes in each half, concentrated on the defensive end, pulling down a team-high seven rebounds (all off the defensive glass) with a block, though he didn’t have a steal. Three of his four assists also came in the first half, leading to threes by Jarod Lucas, Tyler Powell and Darrion Williams. His shooting (seven points) and passing (nine) led to 16 points in the first half, more than half of the Pack’s 30-point output in the first 20 minutes. In the second half his shooting (zero) and passing (two on a Will Baker jumper) led to just two of the Pack’s 44 points.

Williams contributed little to the victory, scoring just three points with four rebounds in 30 minutes. He did hit a 3-pointer to cut Boise’s lead to 25-21 with 6:39 to go in the first half but he finished 1-of-4 from the floor (all threes). His only steal, with 7:19 to go in the game, was quickly followed by a turnover of his own six seconds later and then a foul 10 seconds after that. In the first six minutes of the second half, he had a missed three, two fouls and a turnover. The 6-6 freshman’s offense has all but dried up since the start of December. Over his last six games he has scored just 25 points on 10-of-44 shooting overall and 3-of-22 on threes. His four rebounds on Wednesday are also the third fewest he’s had in his 14 games this year. Williams, though, continues to get big minutes (29 or more over his last eight games) and will wait for his offense to return because the Pack needs his rebounding.

Davidson scored eight points off the bench in 21 minutes, connecting on both his 3-pointers. Both of those threes, though, felt like they came before Boise State even knew he was in the game. He hit a 3-pointer just 39 seconds after he stepped on the court in the first half and just 35 seconds after he entered the game in the second half. The rest of his time on the floor was basically empty minutes, though he did hit a jumper to cut Boise’s lead to 53-51 with nine minutes to go. The 6-8 freshman only had one rebound in his 21 minutes and didn’t get to the line or have an assist, block or steal.

The 6-3 freshman was on the floor for just 4:20 and definitely made his presence known. He missed his only field goal, was 1-of-2 from the line, scored one point and pulled down three rebounds in his four official minutes. All of his time took place in the final five minutes of the first half when the Pack outscored Boise State 9-0 and took a 30-27 halftime lead. Pettigrew did not step on the court in the second half. His three rebounds in four minutes were one more than the 7-foot Baker had in 23 minutes.

Powell had eight points in just 10 minutes, connecting on 3-of-5 shots (2-of-4 threes). He played just three minutes in the first half, scoring five points. His 3-pointer in the first half cut Boise’s lead to 16-15 with 9:37 to go before the half. Powell played a stretch of 7:22 in the second half and was less productive, missing two threes. But he did hit a three to pull the Pack to within 50-49 with 10:15 to play.

A rusty Foster, playing in his first game since Dec. 3, did not score or even take a shot in his 14 minutes. The 6-6 Foster pulled down two rebounds and had an assist, while committing a foul and a turnover. He did not play in the final seven minutes, with the game on the line.

Alford, right now, is the best coach in the Mountain West. He squeezed out the Pack’s 11th victory in 14 games on Wednesday despite the fact that Boise outscored his Wolf Pack 34-16 in the paint, had more rebounds (38-28), had more second-chance points (7-0) and the Boise starters outscored his starters, 69-57. Alford's best shooter (Jarod Lucas) also had an off night. The Pack only led for 54 seconds of the final 14:34. Alford’s best move, it turned out, was sitting Kenan Blackshear for the final five minutes of the first half with the Pack down 27-21. The result was a 9-0 Pack run and a 30-27 halftime lead. The benching also seemed to ignite Blackshear as he dominated the second half.

How did the Wolf Pack win this game? Well, the Pack bench outscored Boise’s bench 17-3 and hit four threes. The Wolf Pack also had twice as many threes (10) as Boise (five), likely because they kept firing (23 attempts) while the gun-shy Broncos fired up just 16. It also didn’t hurt the Pack that Boise had two starters (Tyson Degenhart and Naje Smith) foul out and another (Marcus Shaver) had four fouls. The Pack defense also suffocated Boise’s Max Rice, who had just two points in 27 minutes. The crowd (7,911) also played a huge part in this victory and the Wolf Pack simply puffed up its chest at the right time and stole this game from the Broncos. This game likely exposed more Boise concerns than highlighted Pack positives, but this is what you are supposed to do at home, especially in your Mountain West opener. This is, without question, one of the grittiest and most important victories at Lawlor Events Center in recent Pack history.