Grades: Are big crowds a problem for Pack? 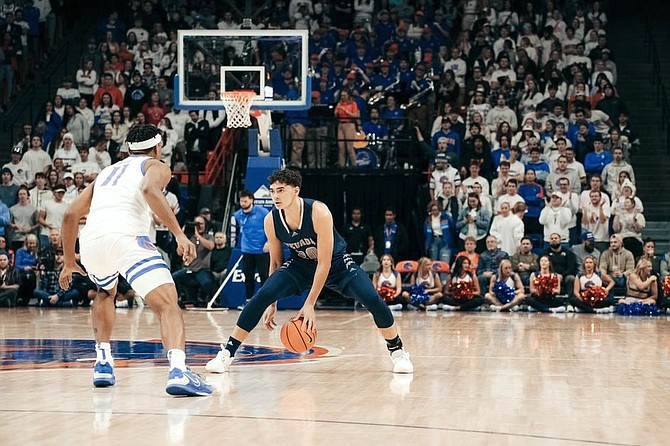 The Wolf Pack’s 6-foot-3 shooting guard finished with 15 points on three threes in 32 minutes. He connected on a 3-pointer and a jumper less than two minutes apart to cut Boise’s lead to 32-30 with 3:33 left in the first half.

Lucas, who sat out six-plus minutes in the first half because of two fouls, missed his first three shots in the second half as Boise blew open the game. Lucas’ final seven points came in the final nine minutes with the Pack down by double digits. Lucas was 5-of-12 from the floor (3-of-8 on threes) with three rebounds.

Blackshear was on the court for 33 minutes and he’d likely want to forget 30 of them. Blackshear’s three-minute highlight film from Tuesday took place all in the first three minutes of the second half when he made all three of his shots and had a steal to help cut Boise’s lead to just 44-42.

The 6-6 point guard’s other 30 minutes are the first place to look when trying to find the reason why this turned out to be the Pack’s most one-sided loss since it lost 73-56 at Fresno State last Feb. 4. Blackshear turned the ball over an alarming seven times (six in a span of just eight-plus minutes in the second half) and missed 7-of-9 shots in his other 30 minutes. He finished with 12 points on 5-of-12 shooting, one assist, no steals, two rebounds and seven turnovers. It is the most turnovers he’s had in a game since he had eight against Tulane on Nov. 21. His one assist is the fewest he’s had in a game this year and his two rebounds equals his low this season.

Baker had a promising start on Tuesday. He made his first three shots and scored seven points in his first 10-plus minutes. The 6-11 center, though, added just five points in his final 16 minutes and missed six of his last seven shots. Baker finished with a dozen points on 4-of-10 shooting. He also had just two rebounds and an assist. His 3-point play cut Boise’s lead to 65-53 with 8:06 to play but he then committed two fouls and missed a layup and a short jumper in the paint over the next six minutes and didn’t score again.

The Pack was 4-1 in the first five games this season when Baker had at least 10 shots but Baker averaged 19.2 points in those five games.

Coleman’s offense returned to the land of the living in the first eight minutes of the game when he scored seven points and made all three of his shots as the Pack took a promising 13-11 lead. But then Coleman’s offense disappeared again and he became the guy who had scored just one point over his last three games combined before Tuesday. Coleman never scored again after those first 12 minutes, taking just one shot. He played 14 minutes in the second half and didn’t take a single shot.

The 6-7 Coleman’s defensive highlight was a block on Max Rice six minutes into the second half but the Broncos retrieved the ball and fed Rice for a 3-pointer eight seconds later for a 53-44 Boise lead. Nobody expects Coleman to be the focus of the Pack offense but we saw in those first 12 minutes what can happen when he actually does try to score. Those first 12 minutes certainly warranted more than one shot over the final 28 minutes of the game.

Williams’ game-high 10 rebounds were the biggest reason why the Pack enjoyed a 30-27 edge on the boards. Six of his rebounds came in the first half with the Pack still in the game. It is the seventh time this season that Williams has had 10-plus rebounds in a game. The 6-6 freshman, though, equaled his season low of just two points on 1-of-3 shooting in 28 minutes. His two assists did lead to 3-pointers by Tre Coleman and Jared Lucas. Williams, though, has now failed to get to the free throw line in eight of his last 12 games. He still has yet to regain his confidence on offense. Over the last two games he’s taken just six shots and scored five points.

Davidson played 21 minutes and scored eight points with three rebounds. He certainly sparked the Wolf Pack in his first appearance on the court, scoring six points, assisting on a Daniel Foster 3-pointer and blocking a shot in a span of just under six minutes. He also had two offensive rebounds just 92 seconds apart, leading to five Pack points midway through the first half.

But the 6-8 freshman played the final 13 minutes of the game and, for some reason, didn’t even take a shot. He didn’t even take a 3-pointer the entire game despite shooting at a 43 percent success rate this season from that distance. Boise State had obviously seen film of Davidson igniting the Pack offense off the bench this year and wasn’t about to allow it to happen on their own home floor.

The 6-3 freshman was 1-of-6 from the floor in his 12 minutes, committed three fouls and turned the ball over once. He did hit a 3-pointer to cut Boise’s lead to 61-47 with 10 minutes to go but then missed a dunk and a 3-pointer and committed an offensive foul in a span of two minutes and was sent back to the bench. Despite his inefficient 12 minutes, his aggressiveness on offense should be commended and the Pack did outscore Boise State 30-28 when he was on the floor.

Powell played just six minutes and had a rebound and a turnover. Most of his minutes (4:27) came in the final 4:48 of the first half. He’s played just 22 minutes over the last four games combined after averaging 11.6 minutes in each of his first 16 games.

Foster played just 11 minutes (just 3:37 in the second half) and hit his only shot, a 3-pointer that cut Boise’s lead to 23-20 with 7:34 to go in the first half. Foster also assisted on Darrion Williams’ only two points of the game late in the first half. Foster’s 3-pointer is his first of the year (five attempts). He’s now just 12-of-44 (27 percent) on threes for his three-year career that spans 54 games. Foster has played just 12 games this year because of injury and is averaging just 12 minutes a game after averaging 20 minutes a game last year in all 31 games.

Nothing Alford did seemed to light a fire under his Wolf Pack. But that is likely due to the Boise State defense and the crowd (9,653) more than anything else. Boise State frustrated Blackshear and made sure Lucas, Baker and Davidson never found their rhythm.

Alford, understandably, seemed to coach the game as if waiting for yet another patented Pack run that has pulled the team out of the fire so often this season. But it never came. Again, Boise State likely had a lot to do with that. The Pack missed 16-of-24 shots in the second half while Boise became just the fourth team this year (after Oregon, Kansas State, Pepperdine) to score 77 or more points against Nevada.

The Pack needed someone to go out there and dump 25-plus points on the Broncos and, unfortunately, the only one capable of that in silver and blue on Tuesday was the 58-year-old coach at the end of the bench. The Pack was coming off a game (an 85-70 win over Utah State) in which its top three scorers (Baker, Lucas, Blackshear) all got hot at the right time. Against Boise State nobody got hot and some of them simply stopped shooting.

This Wolf Pack team, so far this season, is suffering from a horrible case of stage fright. The Pack has played three games this season in front of crowds of 5,000 or more on the road (Oregon, San Diego State, Boise State) and lost them all. Over the last two seasons the Pack has faced road crowds of 5,000 or more 11 times and lost 10. The only win was 78-66 on Feb. 11, 2022 at Utah State.

The good news is that the Pack only has to play three more games the rest of the year (New Mexico, Utah State and UNLV) in front of teams that are averaging 5,000 or more fans and none of them play defense like Boise State, Oregon and San Diego State.