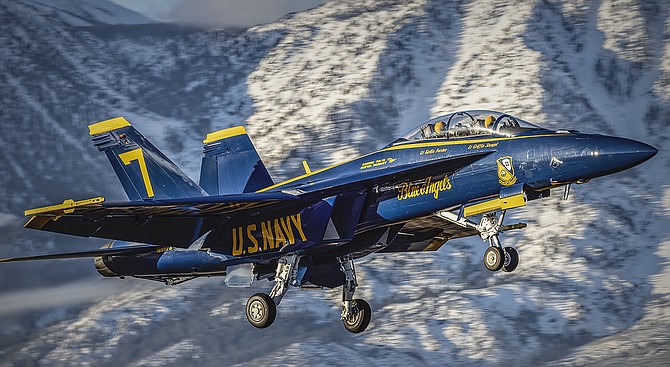 A Blue Angels F/A18 makes a scouting trip to Minden-Tahoe Airport on Thursday and Friday.
JT Humphrey | Special to The R-C

After the cancelation of the popular airshow in 2020 due to the coronavirus outbreak, Douglas County can celebrate the anticipated return of the Blue Angels in the fall.

The U.S. Navy performers team is set to participate in the Aviation Roundup Airshow at the Minden-Tahoe Airport Oct. 1-2.

“The staff of the airport is excited to bring the Blue Angels back and are looking forward to producing another great airshow for the community,” airport officials said.

The Aviation Roundup is a premier airshow produced by Douglas County and hosted at the Minden-Tahoe Airport. The show is bi-annual and features airshow performers and military jet demonstration teams. In the past, the Minden-Tahoe airport has hosted both the United States Navy Blue Angels and Air Force Thunderbirds. The Blue Angels previously performed at the Aviation Roundup in 2018.

“It’s very exciting to be coming to the Minden airport for the Aviation Roundup,” said Blue Angels pilot Lt. Griffin Stangel. “We are looking forward to show what the Super Hornet and Hercules can do.”

The Super Hornet is a F/A-18 E/F hornet models, but is 25 percent larger, can fly 40 percent further, remain on station 80 percent longer and carry more weapons than its predecessors, according to www.blueangels.navy.mil . The Hercules is and integrated Marine Corps C-130 aircraft, affectionately known as “Fat Albert.”

“The F-18 Super Hornet is relatively new,” said Blue Angels Pilot Lt. Katlin Forster. “We are in our second season of flying the aircraft, but it will be something new the community here in Minden will have the opportunity to experience.”

Stangel said the mission of the Blue Angels and the aviation performances is to showcase the teamwork and professionalism of the United States Navy and Marine Corps through flight demonstration and community outreach while inspiring a culture of excellence and service to the country.

“When we do these outreaches, we hope the community sees that we are just normal people doing something incredible and hope it inspires them,” said Stangel. “The aviation is to inspire a culture of excellence, if we can inspire someone to better themselves in the smallest way possible, we have done our job.”